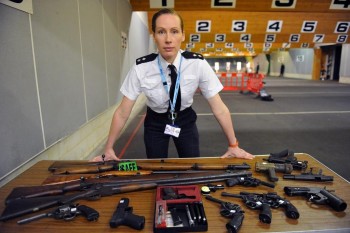 I’m Sarah Johnson, I am, and have been, a TFC for the last 7 years. I’m also a PIM and currently hold the position of Tactical Armed Policing Team Inspector for the East Midlands Operational Support Service. In my spare time I’m also a mother to three little boys aged 2, 4 and 6 and wife to an AFO.

I joined Northamptonshire Police in 2001 after completing my degree. I joined the Police because I was hoping to find a career that would offer me interesting challenges, opportunity and excitement. My first posts were in response and community teams. I enjoyed both roles but wanted to do more and so I sat my promotion exams and was promoted to sergeant soon after. I don’t think I considered the ramifications on my opportunities for lateral development at the time, I was just excited about my new role. I went on to work in other roles within projects, as a staff officer but also sat my Inspectors exams and was promoted again in 2007. I reached a bit of an impasse at this point. I wanted to seek lateral development but my roles were now relatively limited by my promotion.

I applied for and was accepted into the Force Control in 2008 and, as a result, was introduced to firearms by becoming a Tactical Firearms Commander. I’ve taken quite a few courses within the Police service but this was by far the most challenging.

I hadn’t had much exposure to the world of firearms before then (despite being married to an AFO!) and, honestly, I had some stereotypes about the people I would meet and how they would behave. The course really changed my view on them as individuals and also the huge pressure and responsibility we place those officers in that role which in turn contributed to me joining the PFOA.

I was very proud to pass my course and went on to work as the control room inspector for the next three years. I found, and continue to find, the management of firearms incidents a challenge. I also discovered that there is huge experience and support available from the the officers dedicated to this role. Working with them led me to realise that I really wanted to progress my career into firearms but, in a small force, the opportunities were a bit limited to entering Specialist Ops (as it was known at the time). With both firearms Inspectors roles being filled, I applied for a different Ops role managing Events and Contingencies and this allowed me to develop my spontaneous TFC role with the additional planned skills.

I stayed in the Events role for about 18 months before an opportunity arose for me to take on the AFO Inspectors role in January 2014. Since then I’ve been fortunate enough to be able to assist in the development of EMOpSS and accepted into my current role with a regional SFO team.

I think that, at any rank, firearms is a challenging but exciting job which I would encourage anyone to look into if they have an interest but I would want to be clear that it is a demanding role.  The management of firearms is an intelligent process requiring dynamic decision making, physical fitness and coordination plus excellent general policing skills.  However, they are not gender specific skills.

I want to change the negative stereotypical views held in respect of firearms officers and their roles. I think they are out of date with the reality of a professional, dynamic and progressive area of policing. Like most stereotypes, they focus on negative caricatures  which bear little reality to our current roles and actively deter many from considering it as a career path. I think it is unfair on the many excellent officers already in these roles and I’d encourage anyone interested to actually go and investigate the role yourself rather than be influenced by speculation.

I want to support people to considering the firearms role.  I think it has huge opportunities for personal development and I am keen to encourage female officers to apply as we continue to be underrepresented in the role. I’m happy to be contacted by people who are interested in firearms as a career path. I have particular experience of managing flexible working patterns (my husband and I both work full time in the same department), recruitment and diversity.

AFO Firearms Officers College of Policing PFEW Armed Police Numbers Taser Terror attack Welfare Support Programme Mental Health Police Scotland Assault on Police Terror Threat Home Office welfare ARV PTSD Armed Police Protect The Protectors PFOA West Mids Police illegal firearms WSP wellbeing NPCC Metropolitan Police
I have recently been medically retired from the police with PTSD following a serious injury on duty a few years ago. I would not be here if it was not for the PFOA - they literally saved my life. In February 2017 I was long-term sick off of work and I was in a very bad place. Whilst I have been unable to continue as a serving officer, I will forever be indebted to the PFOA. I will never be able to repay them for all that they did. All I can say is thank you so much from me and my family.
PFOA assisted by offering counselling/coaching support to officer’s family. A respite break was granted to allow the officer and his family to get away and spend some valuable time together as a family unit.
The PFOA purchased a new cross trainer and have loaned this to the officer to enable him to remain active and hopefully return to Ops.
PFOA arranges support for the officers involved prior to the Inquest and after by way of a respite breaks and NLP Coaching or Counselling.
I would like to personally thank the PFOA for the gifts we received for our daughter. The timing could not have been better. the week the gifts arrived, she had lost her hair and was due to go back to hospital for her next round of chemotherapy treatment which she was not looking forward to. Opening the parcel put a big smile back on her face for two reasons. firstly, because you had chosen as gifts exactly what she would have chosen for herself. But secondly and more importantly, because she realised other people ere also thinking of her and willing her to get better. People she had never met.
Thank you so much for the shopping vouchers, they will come in very handy. Thank you for helping my daddy to be himself again. Keep helping police officers because some people don’t understand how hard it can be and they are doing a great thing.
This act of kindness was greatly appreciated by us both at what is a very difficult time for our family.
© 2017 PFOA - Police Firearms Officers Association Head Office: Chatteris Police Station, 18 East Park Street, Chatteris, Cambridgeshire PE16 6LD - Tel: 01354 697 890 - Email: info@pfoa.co.uk Registered Charity No.1139247 Company No. 07295737