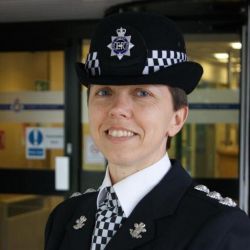 I joined the Police Service in 1992 and with no prior background in firearms a career in that sphere had never really crossed my mind until a familiarisation day was advertised in force.  There were no females on the department at that time and my curiosity, as to why, got the better of me so I went along to find out more. This turned out to be one of the best decisions of my career to date.

The firearms instructors were great in explaining the role and in ensuring those considering a career in firearms did so with their eyes wide open.  The opportunity to fire the weaponry on the range was of huge benefit to those like me who’d never done so before.  The whole day was very informative and positive feedback on my shooting skills led to my subsequent application to become an Authorised Firearms Officer (AFO).  Clearly the decision to become an AFO is not without impact on home and family life and is one I discussed at length with my husband.

I was one of three females on my basic firearms course which was deemed a real success in terms of female candidate numbers back then.  In writing this article I’ve tried to balance the highs and lows of my experience in the firearms world.  There weren’t many, if any, lows.  The kit was a bit on the large side and there were shared conveniences to contend with but the training team were very proactive in their efforts to resolve these issues.  My experience of the course was very positive.  Challenging - yes, testing-of course, inclusive and fair – completely.

Soon after qualifying as an AFO I specialised as a Close Protection Officer.  Being the lone female on the course wasn’t an issue, not that I expected it to be.  My male colleagues and instructing team were great.  The strong team ethos that is so prevalent across the area of firearms policing continued as a theme through this course.

It wasn’t until my temporary promotion that I started to experience difficulty in committing the time to the training required for my AFO and CPO roles.  Numerous meetings with the Chief Firearms Instructor were unable to resolve the difficulties, despite his best efforts.  The demands from my new role were increasing and I found balancing that against my part time hours and raising my family challenging, resulting in the difficult decision to hang up my firearms holster.

However my interest in firearms policing remained with me.  Some years later I was posted as Inspector responsible for our then Firearms Operations and Firearms Training Departments.  I was humbled at being the first female in Gwent to hold the post.  I was now responsible for a team of AFOs and Instructors, all of whom were male. I dealt with a number of challenges during this posting, some of which required very difficult decisions to be made.  The professionalism demonstrated by the teams whilst leading them through that period is indicative of the behaviour of firearms officers.  The trust, confidence and respect that I experienced from the team was evident from day one and throughout my time leading them.

Soon after training and accrediting as a Tactical Firearms Commander I was temporarily promoted to Chief Inspector which left me with mixed feelings.  Clearly I was pleased with the temporary promotion but this meant moving to our 24/7 Silver Chief Inspector Cadre and leaving the Armed Response Unit.  With a heavy heart I moved on, still retaining firearms in my career as a Tactical Firearms Commander.

I have since furthered my firearms roles by training and accrediting as a Post Incident Manager (PIM), an area of significant interest to me.  I’m currently the lead for PIM across the now Joint Firearms Unit Collaboration of Gwent, South Wales and Dyfed Powys Police areas.  Since becoming a PIM I’ve been involved in a number Post Incident Processes and led on PIM for the NATO Summit in 2014.  I now support the training and development of Post Incident Managers regionally and nationally.

I’m also an Executive Committee Member of the Police Firearms Officers Association and felt very honoured to be invited to support the fantastic work of the charity.

It’s not until writing this article that I realise how significant firearms has been in differing roles throughout my career.  This all began with my decision to attend a familiarisation day and I’ve continued to personally support similar awareness days sharing my experiences with others.

Firearms is an area of policing to which I feel naturally drawn and comfortable.  The roles are challenging and the responsibility high.  A career in firearms policing is one of individual choice.

There is a wealth of support, advice and guidance available nationwide to female officers interested in pursuing a career in firearms policing.   It’s hoped that this new section of the PFOA website will help in connecting and supporting females to achieve their goals.

This email address is being protected from spambots. You need JavaScript enabled to view it.

wellbeing WSP Firearms Officers Armed Police illegal firearms PFEW Protect The Protectors ARV Armed Police Numbers College of Policing Welfare Support Programme Taser Home Office Police Scotland Metropolitan Police AFO Mental Health Terror Threat Terror attack PTSD West Mids Police PFOA welfare Assault on Police PSNI
I have recently been medically retired from the police with PTSD following a serious injury on duty a few years ago. I would not be here if it was not for the PFOA - they literally saved my life. In February 2017 I was long-term sick off of work and I was in a very bad place. Whilst I have been unable to continue as a serving officer, I will forever be indebted to the PFOA. I will never be able to repay them for all that they did. All I can say is thank you so much from me and my family.
PFOA assisted by offering counselling/coaching support to officer’s family. A respite break was granted to allow the officer and his family to get away and spend some valuable time together as a family unit.
The PFOA purchased a new cross trainer and have loaned this to the officer to enable him to remain active and hopefully return to Ops.
PFOA arranges support for the officers involved prior to the Inquest and after by way of a respite breaks and NLP Coaching or Counselling.
I would like to personally thank the PFOA for the gifts we received for our daughter. The timing could not have been better. the week the gifts arrived, she had lost her hair and was due to go back to hospital for her next round of chemotherapy treatment which she was not looking forward to. Opening the parcel put a big smile back on her face for two reasons. firstly, because you had chosen as gifts exactly what she would have chosen for herself. But secondly and more importantly, because she realised other people ere also thinking of her and willing her to get better. People she had never met.
Thank you so much for the shopping vouchers, they will come in very handy. Thank you for helping my daddy to be himself again. Keep helping police officers because some people don’t understand how hard it can be and they are doing a great thing.
This act of kindness was greatly appreciated by us both at what is a very difficult time for our family.
© 2017 PFOA - Police Firearms Officers Association Head Office: Chatteris Police Station, 18 East Park Street, Chatteris, Cambridgeshire PE16 6LD - Tel: 01354 697 890 - Email: info@pfoa.co.uk Registered Charity No.1139247 Company No. 07295737