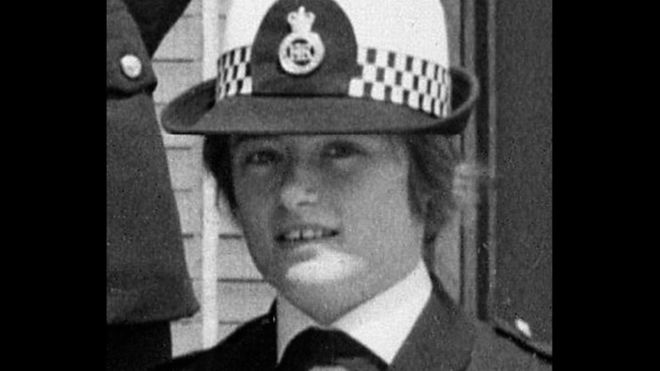 Thirty-five years ago a young police officer was shot and killed at a demonstration - her colleague held her as she died. He told the Victoria Derbyshire programme how he has been trying to find her killer ever since.

On 17 April 1984, PC Yvonne Fletcher and PC John Murray were among officers sent to police a small demonstration outside the former Libyan Embassy in central London.

The 25-year-old was hit in the back by a gunshot from a first-floor window and died in Westminster Hospital a short time later. Her death led to an 11-day siege of the building and the severing of diplomatic links between the UK and Libya.

In her last moments, Mr Murray promised he would find her killers.

"I remember in detail what happened that day," he explains. "One of the main things was that I promised Yvonne as she lay dying that I would bring her killers to justice.

Mr Murray has now launched a civil claim for damages against Saleh Ibrahim Mabrouk, an ex-aide to Libyan leader Col Muammar Gaddafi, to the High Court in London. It aims to force him to appear in court and reveal who shot the officer.

One of a number of Libyans deported from the embassy after the killing, he was arrested by UK police in 2015 in connection with the murder. But he was told in 2017 the case would not proceed and has never been charged. At the time, his son said his father was innocent.

Despite the passage of time, Mr Murray has never lost faith that he will achieve justice.

"It's been difficult, it's been hard, it's been a long fight. But the events that day were horrendous and horrific, and I will keep fighting for her.

"This is my last chance, I've waited 35 years for this. It will happen," he says. "You can never give up hope, that's one thing you will always have."

Lawyers acting for Mr Mabrouk told the BBC: "British police know and accept he was not the person who shot PC Yvonne Fletcher.

"He has previously been interviewed about the events surrounding her death and has fully cooperated with police and security service investigations.

"Mr Mabrouk is no longer permitted to enter the UK by the Home Office. He is therefore unable to attend court to give evidence were the court to invite him to defend the claim."

The Victoria Derbyshire programme brought together Mr Murray with three other colleagues, to pay tribute to Ms Fletcher.

The police hats belonging to Ms Fletcher, Mr Murray and other officers, remained where they fell during the siege. Requests for her hat to be returned for her funeral were refused by the Libyans, so Clive Mayberry decided to take matters into his own hands.

He breached the police cordon and ran across St James's Square to retrieve it. His identity has not been known to the public until now.

"As far as I'm concerned, that hat had to go on the coffin. It's only right," he explains. "They killed her, yet they wanted to stop her having the hat as well. That's taking the mick. That was it, I was going to get it.

"I grabbed my helmet, hat in one hand, saluted the Libyans, I legged it straight back, and was arrested by the inspector and PC further down the road. Very embarrassing really."

Mr Mayberry was never charged and his actions received national attention. His efforts appeared on the front page of the Sun and he was granted the Freedom of the City of London.

"It's good - south-east London boy does good," he says.

Tony Long was a firearms officer sent to the scene after the shooting.

"We were there dealing with people who had harmed police officers, and we wanted to see them arrested," he says.

When the siege ended, all Libyan diplomats were allowed to leave the embassy and given diplomatic immunity.

"For me that was the worst thing, whenever I come back here [to the embassy], and I come back fairly frequently, was just the fact that we as a country surrendered," he says.

"They were the people that were meant to surrender, the people that came out of that building. We should have been able to put the handcuffs on the person that shot Yvonne. We had to watch them leave."

Matt Johnson was close friends with Ms Fletcher, and drove the vehicle that escorted the ambulance as it took her to hospital.

He says he was "very apprehensive" about revisiting the scene of Ms Fletcher's death with his former colleagues.

"When something like that happens, especially when it happens to a close friend, you realise you're not invincible, you're mortal, and in an instant your life can end by doing the job you've been called on to do.

"It had a profound effect on me and eventually resulted in me having to part company with the police."

Tweet
Tags:
Libya Seige Armed Police Terrorists
More than half of officers worry about money almos...
We can’t remove stress in policing, but we can tal...

Assault on Police Welfare Support Programme WSP wellbeing Terror Threat welfare PTSD illegal firearms ARV IPCC Armed Police PFEW Firearms Officers Mental Health Terror attack Police Scotland Taser AFO Armed Police Numbers Metropolitan Police PSNI Protect The Protectors West Mids Police PFOA Home Office
I have recently been medically retired from the police with PTSD following a serious injury on duty a few years ago. I would not be here if it was not for the PFOA - they literally saved my life. In February 2017 I was long-term sick off of work and I was in a very bad place. Whilst I have been unable to continue as a serving officer, I will forever be indebted to the PFOA. I will never be able to repay them for all that they did. All I can say is thank you so much from me and my family.
PFOA assisted by offering counselling/coaching support to officer’s family. A respite break was granted to allow the officer and his family to get away and spend some valuable time together as a family unit.
The PFOA purchased a new cross trainer and have loaned this to the officer to enable him to remain active and hopefully return to Ops.
PFOA arranges support for the officers involved prior to the Inquest and after by way of a respite breaks and NLP Coaching or Counselling.
I would like to personally thank the PFOA for the gifts we received for our daughter. The timing could not have been better. the week the gifts arrived, she had lost her hair and was due to go back to hospital for her next round of chemotherapy treatment which she was not looking forward to. Opening the parcel put a big smile back on her face for two reasons. firstly, because you had chosen as gifts exactly what she would have chosen for herself. But secondly and more importantly, because she realised other people ere also thinking of her and willing her to get better. People she had never met.
Thank you so much for the shopping vouchers, they will come in very handy. Thank you for helping my daddy to be himself again. Keep helping police officers because some people don’t understand how hard it can be and they are doing a great thing.
This act of kindness was greatly appreciated by us both at what is a very difficult time for our family.
© 2017 PFOA - Police Firearms Officers Association
Head Office: Chatteris Police Station, 18 East Park Street, Chatteris,
Cambridgeshire PE16 6LD - Tel: 01354 697 890
Email: info@pfoa.co.uk