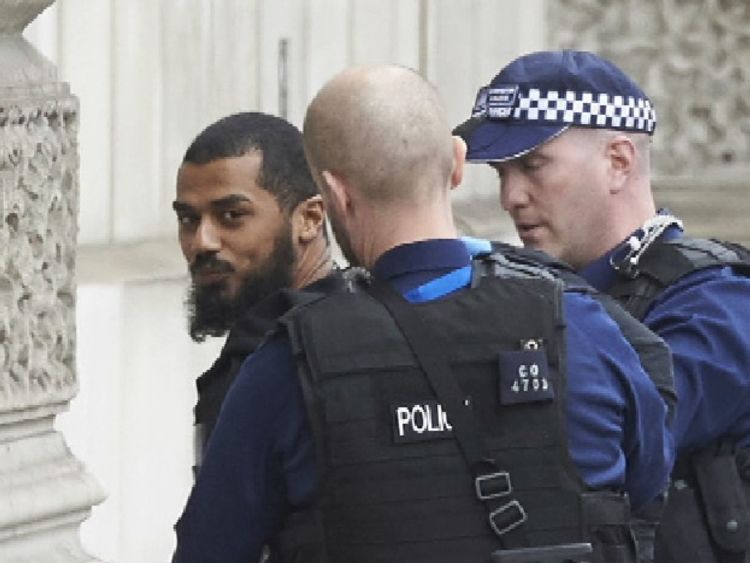 SKY NEWS - Armed officers have arrested a man in connection with preparing a terror attack just yards from Downing Street.
The suspect was known to counter-terrorism police and British intelligence agencies prior to his arrest, according to Sky sources.
Police say the 27-year-old was carrying a rucksack containing several knives - and forensic officers were seen examining knives on the pavement.
The suspect was known to counter-terrorism police and British intelligence agencies prior to his arrest, according to Sky sources.
Roads were locked down as officers carried out the arrest, pushing the man to the ground before holding him at the scene. No one was injured in the incident, and Whitehall has since reopened northbound.
The Metropolitan Police said the man was stopped at 2.22pm as part of an ongoing search operation. He has been taken to a south London police station where he is being held under the Terrorism Act.
He was arrested on the Parliament Street junction with Parliament Square, close to the scene of last month's terror attack which killed five people including PC Keith Palmer on 22 March.
Theresa May was not at Number 10 at the time of the incident.
Speaking from a General Election campaign event, the Prime Minister said: "I'm aware that a man has been arrested in Whitehall today and that individual has been arrested on the basis of a terrorism charge.
"I think it shows that our police and intelligence and security services are on alert as they always are - looking to keep us safe and secure. I would say we owe a huge debt of gratitude to these people."
London Mayor Sadiq Khan tweeted: "Thanks to all officers who dealt swiftly & professionally with the incident in Whitehall. The Met Commissioner has briefed me on the arrest."
A Metropolitan Police statement said: "The man, aged in his late twenties, was arrested on suspicion of possession of an offensive weapon and on suspicion of the commission, preparation and instigation of acts of terrorism.
"Knives have been recovered from him"
"Detectives from the Counter Terrorism Command are continuing their investigation, and as a result of this arrest there is no immediate known threat."
Sky News Political Correspondent Lewis Goodall said: "A witness said at one point he was taken to the ground - he was wearing a black tracksuit. Police surrounded him.
"There are various police officers here, both armed guards and forensic officers who are examining the scene. Earlier, we managed to get in the thick of it and we could see a bag clearly with a selection of knives which are being examined.
"This is one of the busiest thoroughfares in London, you've got thousands and thousands of people working in government departments among other things and the area has come to something of a standstill."
A builder working on the road nearby said: "I saw the police officers catch him. They caught him and got him on the ground."
Asked if the suspect was waving knives, acting aggressively or shouting, the witness said: "No."
Tweet
Tags:
Metropolitan Police Security Services Keith Palmer Terrorists AFO
Woman shot in anti-terror operation
Experienced firearms officers should get pension i...

Firearms Officers AFO Police Scotland welfare Assault on Police Home Office ARV illegal firearms PFOA College of Policing wellbeing Protect The Protectors Metropolitan Police WSP NPCC Terror attack Mental Health West Mids Police PTSD Welfare Support Programme PFEW Armed Police Numbers Terror Threat Armed Police Taser
I have recently been medically retired from the police with PTSD following a serious injury on duty a few years ago. I would not be here if it was not for the PFOA - they literally saved my life. In February 2017 I was long-term sick off of work and I was in a very bad place. Whilst I have been unable to continue as a serving officer, I will forever be indebted to the PFOA. I will never be able to repay them for all that they did. All I can say is thank you so much from me and my family.
PFOA assisted by offering counselling/coaching support to officer’s family. A respite break was granted to allow the officer and his family to get away and spend some valuable time together as a family unit.
The PFOA purchased a new cross trainer and have loaned this to the officer to enable him to remain active and hopefully return to Ops.
PFOA arranges support for the officers involved prior to the Inquest and after by way of a respite breaks and NLP Coaching or Counselling.
I would like to personally thank the PFOA for the gifts we received for our daughter. The timing could not have been better. the week the gifts arrived, she had lost her hair and was due to go back to hospital for her next round of chemotherapy treatment which she was not looking forward to. Opening the parcel put a big smile back on her face for two reasons. firstly, because you had chosen as gifts exactly what she would have chosen for herself. But secondly and more importantly, because she realised other people ere also thinking of her and willing her to get better. People she had never met.
Thank you so much for the shopping vouchers, they will come in very handy. Thank you for helping my daddy to be himself again. Keep helping police officers because some people don’t understand how hard it can be and they are doing a great thing.
This act of kindness was greatly appreciated by us both at what is a very difficult time for our family.
© 2017 PFOA - Police Firearms Officers Association
Head Office: Chatteris Police Station, 18 East Park Street, Chatteris,
Cambridgeshire PE16 6LD - Tel: 01354 697 890
Email: info@pfoa.co.uk