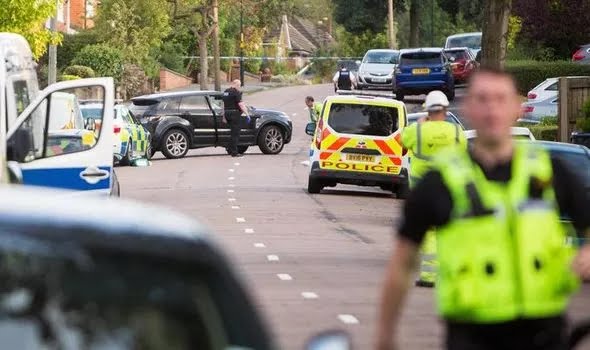 VIOLENT assaults on police have risen by a third in just four years, new figures reveal. Officers are being injured on duty at a rate of 28 a day as the crime epidemic sweeping the UK shows no sign of ending. Bobbies were victims of 10,399 assaults that caused injuries last year – up 32 per cent from 7,903 recorded in 2015/16.

“Every officer signs up knowing policing can be dangerous, and if called upon they will be the ones expected to unquestioningly run towards danger.

“And every day in every town across the country, police officers are assaulted and injured just doing their jobs.

The Police Federation campaigned for harsher sentences. What we need now is for magistrates and judges to use the full force of their bolstered powers to reinforce the message that these acts are unacceptable and should never be considered ‘just part of the job’.”

Latest Home Office data shows there were 20,578 assaults on officers across all forces in England and Wales, including the British Transport Police, that did not cause injury in the year to March (2018/19).

The 10,399 assaults that did cause injuries were an increase of 27 percent in a year.

Metropolitan Police officers were the most routinely attacked, with 2,319 assaults causing injuries last year, equal to six a day.

Overall, there were 30,977 assaults of any kind, equal to 85 officers being attacked every day.

Tory MP David Davies said: “These absolutely appalling figures underline the importance of much stronger prison sentences for those who commit violent crimes, especially those who attack frontline public sector workers, including police officers, in the course of their duty.

“Having spent nine years as a special constable I know the police put themselves on the line to protect the public and don’t deserve the abuse and violence they face on an almost daily basis.”

Rank and file officers are facing an unprecedented threat from criminals carrying knives and weapons, it was said.

All frontline police carry batons but Tasers – first issued in 2004 – are not routinely authorised by all forces.

The increase in assaults on officers comes after a week in which two were hospitalised for horrific injuries sustained while on duty.

Last Thursday, PC Stuart Outten, 28, was stabbed in the head as he tried to stop a van suspected of having no insurance in Leyton, east London.

The Met policeman Tasered his assailant despite receiving multiple stab wounds to his head and body.

PC Outten suffered a wound to the side of his head which required stitches and needed an operation for a hand injury caused while trying to fend off the attack.

PC Gareth Phillips was run over by his own patrol car in Birmingham on Saturday.

The 42-year-old traffic officer was left with potentially life-changing injuries after the incident in Moseley. Home Office figures show forces in England and Wales saw 20,564 police officers leave between March 2010 and March 2019.

Prime Minister Boris Johnson said the recruitment of 20,000 new officers would begin within weeks as he promises to get a grip on “Wild West Britain”.

Such was the alarm at the number of attacks on police officers, the Home Office introduced a specific category for “assault with injury on a constable” in 2017.

Home Secretary Priti Patel said: “I’ll back the police and help bring an end to these shocking acts of violence.”

A Government spokesman said: “Being attacked should never be part of the job for our courageous police officers, who put themselves in harm’s way to protect us.

“That is why we supported the Assaults on Emergency Workers Act, which means judges must consider tougher sentences for assaults on emergency workers.”

Metropolitan Police AFO Protect The Protectors PFEW Assault on Police Taser Firearms Officers WSP ARV wellbeing Armed Police illegal firearms Terror Threat Police Scotland Welfare Support Programme PTSD NPCC Mental Health West Mids Police Armed Police Numbers PFOA Home Office Terror attack welfare College of Policing
I have recently been medically retired from the police with PTSD following a serious injury on duty a few years ago. I would not be here if it was not for the PFOA - they literally saved my life. In February 2017 I was long-term sick off of work and I was in a very bad place. Whilst I have been unable to continue as a serving officer, I will forever be indebted to the PFOA. I will never be able to repay them for all that they did. All I can say is thank you so much from me and my family.
PFOA assisted by offering counselling/coaching support to officer’s family. A respite break was granted to allow the officer and his family to get away and spend some valuable time together as a family unit.
The PFOA purchased a new cross trainer and have loaned this to the officer to enable him to remain active and hopefully return to Ops.
PFOA arranges support for the officers involved prior to the Inquest and after by way of a respite breaks and NLP Coaching or Counselling.
I would like to personally thank the PFOA for the gifts we received for our daughter. The timing could not have been better. the week the gifts arrived, she had lost her hair and was due to go back to hospital for her next round of chemotherapy treatment which she was not looking forward to. Opening the parcel put a big smile back on her face for two reasons. firstly, because you had chosen as gifts exactly what she would have chosen for herself. But secondly and more importantly, because she realised other people ere also thinking of her and willing her to get better. People she had never met.
Thank you so much for the shopping vouchers, they will come in very handy. Thank you for helping my daddy to be himself again. Keep helping police officers because some people don’t understand how hard it can be and they are doing a great thing.
This act of kindness was greatly appreciated by us both at what is a very difficult time for our family.
© 2017 PFOA - Police Firearms Officers Association
Head Office: Chatteris Police Station, 18 East Park Street, Chatteris,
Cambridgeshire PE16 6LD - Tel: 01354 697 890
Email: info@pfoa.co.uk