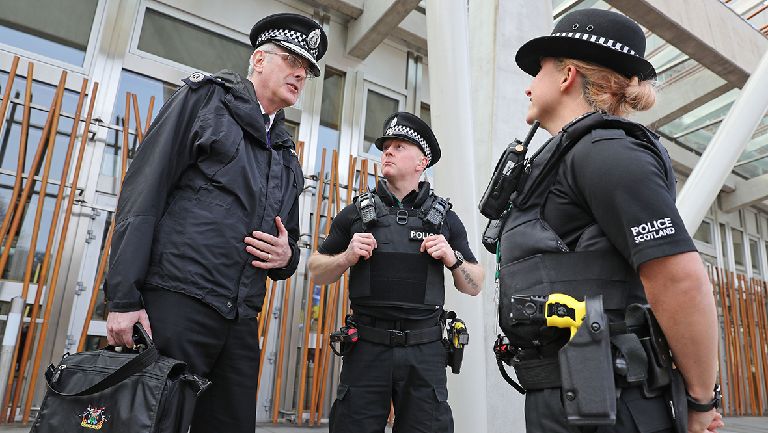 Meanwhile, specially trained armed police will be deployed to routine incidents for the first time since 2014.
Guidelines preventing them from being sent to all but the most serious emergencies were introduced after it emerged they were performing duties like traffic stops.

The restrictions will be relaxed in the new year, Police Scotland announced on Thursday.
Deputy chief constable Johnny Gwynne said: "Our officers are facing increasing threats of violence from people with knives and other bladed weapons.

"We've also seen an increase in the number of officers attacked while carrying out their everyday duties."

Police Scotland cited figures showing a 121% increase in the number of assaults on officers between 2014 and 2017.

Concerns about armed policing first hit the headlines in July 2014 after officers were photographed carrying handguns on the street in Inverness.

Then-chief constable Sir Stephen House later announced armed police would only be deployed to life-threatening incidents amid accusations that the force was becoming increasingly militarised.

John Finnie MSP, a former police officer and current justice spokesman for the Scottish Greens, said he believes the changes will cause alarm.

"I share public concerns about the deployment of more armed officers to routine incidents and greater deployment of Tasers," he said.

"Many people will be alarmed rather than reassured by these changes. Slowly but surely we see the balance tipping from largely defensive equipment to the deployment of overtly offensive equipment."

He added: "The growing support for more weaponry is, in part, prompted by terrorist threat assessments which none of us will ever get to see.

"Police Scotland may have spoken to politicians about their plans, however, this falls well short of what could remotely be described as consultation.

"This mission creep is ongoing towards a fully armed police service which will be remote from the public. The Scottish Greens do not support these changes."
Despite the restrictions introduced in 2014, the number of armed officers has risen by around 100 in three years.

"We have increased the number of officers available but out current deployment model is inefficient," Mr Gwynne said.

"This move is designed to maximise the safety of the Scottish public but we are aware that in the past there have been some concerns about the role of armed police officers and that we have not engaged as well as we could have when making decisions about how they are deployed.

"We have learned from that experience."
A recent survey by the Scottish Police Federation (SPF) showed nine out of ten officers want a Taser, which only firearms officers can carry at present.

Two out of three said they wanted a gun. The SPF union, which has voiced support for a wider roll-out of armed policing, said officers feel vulnerable.

Police in Scotland will be equipped with the Taser X2 Defender, which is capable of incapacitating a target at a range of 15ft with a 2000-volt shock.

PTSD Terror attack Assault on Police welfare West Mids Police Home Office PFEW Welfare Support Programme Protect The Protectors wellbeing Taser IPCC Armed Police Armed Police Numbers WSP Firearms Officers AFO Mental Health illegal firearms ARV Police Scotland Terror Threat PSNI PFOA Metropolitan Police
I have recently been medically retired from the police with PTSD following a serious injury on duty a few years ago. I would not be here if it was not for the PFOA - they literally saved my life. In February 2017 I was long-term sick off of work and I was in a very bad place. Whilst I have been unable to continue as a serving officer, I will forever be indebted to the PFOA. I will never be able to repay them for all that they did. All I can say is thank you so much from me and my family.
PFOA assisted by offering counselling/coaching support to officer’s family. A respite break was granted to allow the officer and his family to get away and spend some valuable time together as a family unit.
The PFOA purchased a new cross trainer and have loaned this to the officer to enable him to remain active and hopefully return to Ops.
PFOA arranges support for the officers involved prior to the Inquest and after by way of a respite breaks and NLP Coaching or Counselling.
I would like to personally thank the PFOA for the gifts we received for our daughter. The timing could not have been better. the week the gifts arrived, she had lost her hair and was due to go back to hospital for her next round of chemotherapy treatment which she was not looking forward to. Opening the parcel put a big smile back on her face for two reasons. firstly, because you had chosen as gifts exactly what she would have chosen for herself. But secondly and more importantly, because she realised other people ere also thinking of her and willing her to get better. People she had never met.
Thank you so much for the shopping vouchers, they will come in very handy. Thank you for helping my daddy to be himself again. Keep helping police officers because some people don’t understand how hard it can be and they are doing a great thing.
This act of kindness was greatly appreciated by us both at what is a very difficult time for our family.
© 2017 PFOA - Police Firearms Officers Association
Head Office: Chatteris Police Station, 18 East Park Street, Chatteris,
Cambridgeshire PE16 6LD - Tel: 01354 697 890
Email: [email protected]