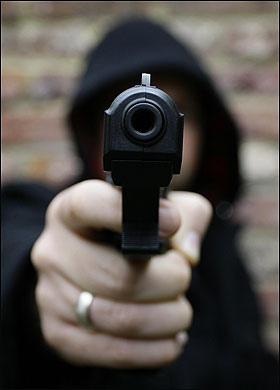 Evening Standard - A leading trauma surgeon has told of the "devastating" injuries caused by low-velocity rounds fired from handguns preferred by London's street gangs.
Duncan Bew, 43, the clinical lead for trauma and emergency surgery at King’s College Hospital said victims are increasingly targeted with low velocity handguns and shotguns which cause horrendous injuries and are nearly always shot in the torso or limbs.
He said bullets from low velocity weapons such as a handgun - rather than a round from an assault rifle -  can travel anywhere inside the body after striking the torso.
They also encountered ammunition which was home made or modified which can fragment and cause significant damage at low velocity.
Mr Bew, who has worked at King’s for the last six years,  said in the last year he has seen the number of people being brought into hospital with gunshot wounds increase by 50 per cent.
One person killed or badly injured by guns every three days in London
“The people that we treat mainly have injuries to the limbs and to the torso because people with injuries to the head very rarely survive," he said.
“If the bullet from one of these low velocity guns hits the torso, it can literally go anywhere and do a significant amount of damage.
“We are seeing an increase in the use of low velocity weapons as whole, handguns, and we have seen a lot of shotgun injuries as well."
He told the Standard: “It used to be something we saw relatively infrequently but we have seen a 50 per cent increase in the number of gun injuries in the last 12 months, people of all ages, and not just at the times that you might expect to see them, Friday and Saturday nights, but throughout the week."
He said he was also dealing with more injuries caused by “improvised” weapons, such as screwdrivers or acids and alkaline substances.
“People who have died from their injuries – the ones that make the headlines – are just the tip of the iceberg.”
He said there was a "perfect correlation" with most gun crimes taking place in more deprived parts of London.
He said: “The poorer members of society are being criminalised and marginalised and there is a greater availability of these weapons.
“The areas where we see these sorts of crimes correlate perfectly with the most deprived areas.”
However Mr Bew, who previously worked at the Royal London Hospital, says that people who have been shot have a far greater chance of survival than they used to, due to what he calls the “chain of survival”.
He praised the work of first responders, including passers-by, who help gun crime victims.
He said: “The chain of survival starts on the roadside with the police, who are often first on the scene and crucial in the savings of lives, through to the paramedics and the surgeons in hospital – at which point it may be that that person needs a blood transfusion and needs to be operated on immediately.
“We have educated members of the public about the importance of placing pressure on wounds.
“Because of this the chances of survival now are much greater than they were a few years ago.
“It is about understanding that it is not a single person who contributes to helping people survive.”
But Mr Bew, a co-founder of the Youth Violence Commission, a cross-party Parliamentary campaign to end youth violence in the UK, added: “Survival isn’t the only thing though; people who experience this sort of trauma often suffer life-changing injuries and require rehabilitation.
“Because we have really focused on keeping people alive with injuries from which they were dying before, there is no money to fund this.
“It is challenging because it is literally under-resourced.
“We now need to focus on getting them rehabilitated into society and getting them to live their lives.”
Tweet
Tags:
Gun crime London Trauma Gangs Handgun
Armed police moments from shooting man
Woman shot in anti-terror operation

Ross Kemp speaks out over reaction to armed police documentary

Assault on Police College of Policing West Mids Police PSNI welfare Police Scotland Terror Threat Armed Police Welfare Support Programme WSP Home Office Taser Protect The Protectors Mental Health illegal firearms Firearms Officers wellbeing Metropolitan Police PTSD ARV Terror attack AFO PFOA Armed Police Numbers PFEW
I have recently been medically retired from the police with PTSD following a serious injury on duty a few years ago. I would not be here if it was not for the PFOA - they literally saved my life. In February 2017 I was long-term sick off of work and I was in a very bad place. Whilst I have been unable to continue as a serving officer, I will forever be indebted to the PFOA. I will never be able to repay them for all that they did. All I can say is thank you so much from me and my family.
PFOA assisted by offering counselling/coaching support to officer’s family. A respite break was granted to allow the officer and his family to get away and spend some valuable time together as a family unit.
The PFOA purchased a new cross trainer and have loaned this to the officer to enable him to remain active and hopefully return to Ops.
PFOA arranges support for the officers involved prior to the Inquest and after by way of a respite breaks and NLP Coaching or Counselling.
I would like to personally thank the PFOA for the gifts we received for our daughter. The timing could not have been better. the week the gifts arrived, she had lost her hair and was due to go back to hospital for her next round of chemotherapy treatment which she was not looking forward to. Opening the parcel put a big smile back on her face for two reasons. firstly, because you had chosen as gifts exactly what she would have chosen for herself. But secondly and more importantly, because she realised other people ere also thinking of her and willing her to get better. People she had never met.
Thank you so much for the shopping vouchers, they will come in very handy. Thank you for helping my daddy to be himself again. Keep helping police officers because some people don’t understand how hard it can be and they are doing a great thing.
This act of kindness was greatly appreciated by us both at what is a very difficult time for our family.
© 2017 PFOA - Police Firearms Officers Association
Head Office: Chatteris Police Station, 18 East Park Street, Chatteris,
Cambridgeshire PE16 6LD - Tel: 01354 697 890
Email: info@pfoa.co.uk