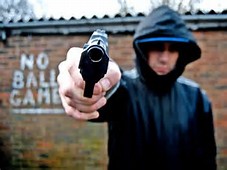 A leading trauma surgeon has told how the number of patients treated for gunshot injuries at a major London hospital has doubled in the last five years.

Martin Griffiths, a consultant vascular and trauma surgeon, said medics at the Royal London Hospital in Whitechapel where he works were expecting to treat 50 to 60 victims of gun crime this year alone.

He said the hospital’s major trauma centre had seen a bigger rise in gunshot injuries compared to knife wounds and that the average age of victims was getting younger.

Dr Griffiths, who works with at-risk teenagers to prevent them from becoming involved in gangs and violent crime, made the remarks at a meeting held by the London Assembly Police and Crime Committee on Thursday.
Last year, gun crime offences in London increased for a third year running and by 42 per cent, from 1,793 offences in 2015/16 to 2,544 offences in 2016/17. Police have seized 635 guns off the streets so far this year.

Dr Griffiths, who also teaches medical students, said: “Our numbers of victims of gun injury have doubled [since 2012]. Gunshot injuries represent about 2.5 per cent of our penetrating trauma.

“Year on year, we have seen a 20 to 30 per cent rise in the past two or three years. We will admit 50 to 60 patients this year with gunshot injuries.
“We’ll also seen a dozen or so under the care of our pre-hospital team who will die at the scene of injury.”

Dr Griffiths said the average age of gun crime victims needing treatment at the hospital had decreased from 25 to the mid to late teens since 2012.

He added that medics at the Barts Health hospital’s major trauma centre in Whitechapel had seen a bigger rise in patients with gun injuries rather than knife wounds and that most were caused by pistols or shotguns.
Met Police commander Jim Stokley, who was also invited to speak at the meeting, said that handguns and shotguns were the weapons of choice and that 46 per cent of London’s gun crime discharges were gang-related.

He said: “We believe that a lot of it is associated with the drugs trade, and by that I mean people dealing drugs at street level and disagreements between different gangs.”

Detective Chief Superintendent Kevin Southworth, head of the Met’s Trident and Area Crime Command, said: “Seventy per cent of crimes we recover a cache of class A drugs with the weapon.”

Dr Griffiths said he believed that introducing at-risk young people to a victim of gun crime who has been left disabled could be a useful prevention technique.

“When you talk to people about knife and gun injury, they think they’re going to either be alive and fine or dead but they are very concerned about cosmetic injuries about colostomy bags about smelling bad, about being disfigured and about being disabled and those are much more horrific than being alive or dead. I think that’s where the real leverage comes from when we’re talking about gun injury,” he said.

“I think meeting a gun victim who has been disabled is much more of a powerful stimulus for change.”

He added that most victims of violence often want to retaliate and that investing in supporting families and building communities could help to prevent that.

“We need to fund initiatives properly and deliver into the community; that way we will have success. We need long-term planning and delivery. It’s about planning from birth through to
death and helping to support and build communities.

Taser Protect The Protectors Metropolitan Police Armed Police Numbers WSP Police Scotland illegal firearms PFEW wellbeing Terror Threat College of Policing Mental Health West Mids Police Home Office welfare ARV Assault on Police Armed Police Welfare Support Programme AFO NPCC PTSD Terror attack Firearms Officers PFOA
I have recently been medically retired from the police with PTSD following a serious injury on duty a few years ago. I would not be here if it was not for the PFOA - they literally saved my life. In February 2017 I was long-term sick off of work and I was in a very bad place. Whilst I have been unable to continue as a serving officer, I will forever be indebted to the PFOA. I will never be able to repay them for all that they did. All I can say is thank you so much from me and my family.
PFOA assisted by offering counselling/coaching support to officer’s family. A respite break was granted to allow the officer and his family to get away and spend some valuable time together as a family unit.
The PFOA purchased a new cross trainer and have loaned this to the officer to enable him to remain active and hopefully return to Ops.
PFOA arranges support for the officers involved prior to the Inquest and after by way of a respite breaks and NLP Coaching or Counselling.
I would like to personally thank the PFOA for the gifts we received for our daughter. The timing could not have been better. the week the gifts arrived, she had lost her hair and was due to go back to hospital for her next round of chemotherapy treatment which she was not looking forward to. Opening the parcel put a big smile back on her face for two reasons. firstly, because you had chosen as gifts exactly what she would have chosen for herself. But secondly and more importantly, because she realised other people ere also thinking of her and willing her to get better. People she had never met.
Thank you so much for the shopping vouchers, they will come in very handy. Thank you for helping my daddy to be himself again. Keep helping police officers because some people don’t understand how hard it can be and they are doing a great thing.
This act of kindness was greatly appreciated by us both at what is a very difficult time for our family.
© 2017 PFOA - Police Firearms Officers Association
Head Office: Chatteris Police Station, 18 East Park Street, Chatteris,
Cambridgeshire PE16 6LD - Tel: 01354 697 890
Email: info@pfoa.co.uk