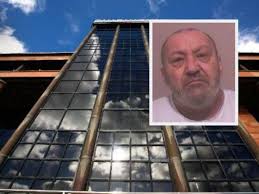 Sgt Andrew Prestedge was trying to help Melvin Scott's partner when he was met with aggression and suffered a horrendous injury to his ankle in Houghton-le-Spring.

A police firearms officer suffered a broken ankle in a scuffle with a crook while trying to help his girlfriend - but the thug who left him partly disabled has walked free from court.

Sgt Andrew Prestedge was concerned for the welfare of Melvin Scott's partner after speaking to her in a car outside his house and so knocked on his door.

He got a hostile and unhelpful reception and Scott ended up coming towards the policeman, who formed the view he was about to attack him.

A court heard the sergeant grabbed hold of Scott and tried to take him to the ground and he resisted and there was a struggle.

Sgt Prestedge then realised his left foot was at an angle of 45 degrees to his leg in an unnatural position and his ankle was badly broken.

Newcastle Crown Court heard the officer has been left 15% disabled and may not be able to return to his role as a firearms officer.

Now Scott, who admitted inflicting GBH on the basis it was a reckless assault, has been spared prison.

The court heard police had followed a car driven by Scott's partner on November 9 last year and it pulled up outside his home on Cathedral View, Houghton-le-Spring.

After speaking to her, they were concerned for her state of health and welfare and after she referred to Scott's address as being that of her boyfriend, Sgt Prestedge went to speak to him.

Prosecutor Michael Bunch said: "He describes how he knocked at the door and the defendant answered and he made inquiries about the defendant's ownership of the vehicle. He confirmed it was his before shutting the door on the officer.

"The officer then re-opened the door to try to continue the conversation with the defendant and he says the defendant responded by aggressively shouting 'don't open my f****** door'.

"The officer continued to try to speak to him about the vehicle and the defendant again said 'don't you open my door, now f*** off' and shut the door again.

"Needing to continue his communication with the defendant, the officer again re-opened the door and again tried to speak to him.

The officer backed down the steps but Scott continued towards him down the path towards the garden gate.

Concerned by his demeanour that he was going to assault him, Sgt Prestedge grabbed hold of him by his shoulder and tried to take him to the ground.

"During that, as the officer pushed the defendant away from himself, he realised his left foot was at a 45 degree angle to his leg, in an unnatural position and he called his colleague for help."

Sgt Prestedge had to have surgery on his broken ankle and needed nine screws and pins inserted into it.

Six months later, he could put weight on it but had a limp and needed to use a walking stick and was requiring further surgery to remove the metal holding it together.

The dad, who has two young sons, is classed as 15% disabled by the DWP and has suffered financially as a result of his inability to work.

Scott told police that while he had been aggressive and abusive, he did not intend to cause any injury and claimed the officer had lunged at him.

The 53-year-old admitted inflicting GBH on the basis it was reckless rather than deliberate.

The judge said Scott has worked well on a community order imposed after he caused the injury last November, for an unrelated, earlier, offence, and it would be "arguably wrong" for her to reverse that good progress.

Judge Mallett said Scott is now responding to medication, after it was reviewed, and has been in no further trouble.

The judge told him: "You have put forward your apologies to the officer.

"I accept you did not intend to cause the injury."

Adam Birkby, defending, said he apologises, adding: "He now accepts the officer was doing his job and he didn't deserve to suffer an injury and the consequences he has.

"He didn't intend to cause the injury.

"He has long term mental health issues exacerbated by alcohol and has an impulse control disorder."

Mr Birby said Scott could feel himself losing control and believes his medication was not strong enough at the time.

Metropolitan Police Firearms Officers Taser Terror Threat College of Policing AFO West Mids Police Home Office WSP Terror attack PSNI wellbeing welfare Mental Health PTSD Armed Police illegal firearms Assault on Police PFEW Police Scotland ARV Welfare Support Programme Armed Police Numbers Protect The Protectors PFOA
I have recently been medically retired from the police with PTSD following a serious injury on duty a few years ago. I would not be here if it was not for the PFOA - they literally saved my life. In February 2017 I was long-term sick off of work and I was in a very bad place. Whilst I have been unable to continue as a serving officer, I will forever be indebted to the PFOA. I will never be able to repay them for all that they did. All I can say is thank you so much from me and my family.
PFOA assisted by offering counselling/coaching support to officer’s family. A respite break was granted to allow the officer and his family to get away and spend some valuable time together as a family unit.
The PFOA purchased a new cross trainer and have loaned this to the officer to enable him to remain active and hopefully return to Ops.
PFOA arranges support for the officers involved prior to the Inquest and after by way of a respite breaks and NLP Coaching or Counselling.
I would like to personally thank the PFOA for the gifts we received for our daughter. The timing could not have been better. the week the gifts arrived, she had lost her hair and was due to go back to hospital for her next round of chemotherapy treatment which she was not looking forward to. Opening the parcel put a big smile back on her face for two reasons. firstly, because you had chosen as gifts exactly what she would have chosen for herself. But secondly and more importantly, because she realised other people ere also thinking of her and willing her to get better. People she had never met.
Thank you so much for the shopping vouchers, they will come in very handy. Thank you for helping my daddy to be himself again. Keep helping police officers because some people don’t understand how hard it can be and they are doing a great thing.
This act of kindness was greatly appreciated by us both at what is a very difficult time for our family.
© 2017 PFOA - Police Firearms Officers Association
Head Office: Chatteris Police Station, 18 East Park Street, Chatteris,
Cambridgeshire PE16 6LD - Tel: 01354 697 890
Email: info@pfoa.co.uk