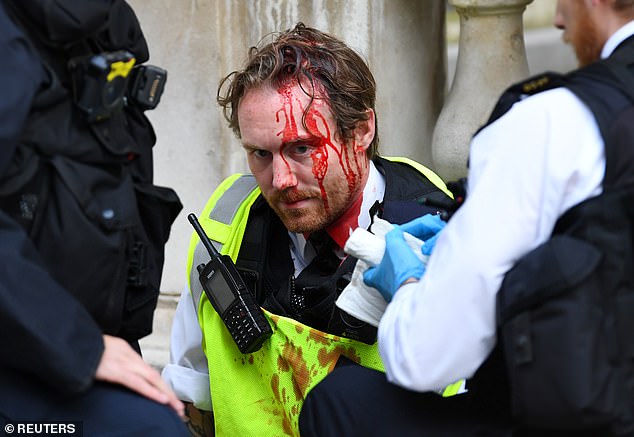 Penny-pinching police chiefs are attacking the pensions paid to hero officers injured in the line of duty.

Disabled and traumatised former officers are being hauled before medical review panels in 'unlawful' attempts to cut their pension packets, campaigners claim.

Around 13,000 wounded officers who can no longer work receive an injury pension, with the money coming out of their old police force's budget.

This week 17 former officers are taking their fight to court in a landmark case. If they lose, it could mean that police injury pensions become fair game for cost-cutting chief constables across the country.

If a police officer can no longer work due to harm suffered in the line of duty, they can qualify for an injury pension for the rest of their life.

But they first have to exhaust all medical treatments and undergo specialist tests to prove they can no longer work, in a process that can take years.

Once they qualify for an injury pension, the level of pay is calculated on their time served and the severity of their injury.

The law allows for the pension rate to be reviewed to determine if there have been any major changes in an officer's condition, which could mean the pay is increased or cut.

But campaigners say that since police budgets have been slashed, some forces are bullying fragile retired officers into undergoing stressful re-examinations — purely to save money.

Former officers have told Money Mail their injuries and integrity are called into question during such reviews, which they feel are set up to cut their pensions.

"I felt so let down by the force I had served"

In more than two decades of front-line policing, Mark routinely attended scenes of death and horror without question.

He also suffered numerous physical injuries in his career with Avon and Somerset Police.

But it wasn't until he was violently assaulted on duty one day in 2011 that it all suddenly overwhelmed him.

The mental toll of what he had seen throughout his career became too much to bear, and he suffered a severe mental breakdown.

Now 58, he has been diagnosed with post-traumatic stress disorder and is still plagued by nightmares and flashbacks.

An expert psychiatrist deemed his mental health to be so bad that in 2012 he was retired from the force with an injury pension now worth around £1,000 a month.

Mark, who does not want his full name printed for fear of repercussions, says of being a police officer: 'We all deal with death and gore. Some people it affects and some people it doesn't.

'I'd like to go to work, I'd like a normal life. But I cannot function on a daily basis.'

Mark's injury pension was first reviewed in 2014 and he was awarded the highest rate because his condition had worsened. But a year later he was told he was due for another review under the force's cost-cutting drive, which was later abandoned after uproar.

Mark, a father-of-five, says he feels betrayed: 'It is really draining. I feel so let down and kicked in the teeth.'

He says he'd swap the pension for his old job back if only he could, adding: I've been a police officer for more than half of my life. I enjoyed it — it was great. I mourn every day for the career I left behind.'

Former Staffordshire Police officers are today taking Chief Constable Gareth Morgan to a judicial review in Birmingham after he demanded access to their full medical history, and cut their pensions by as much as £1,200 a month when they refused.

Solicitor Mark Lake, acting for six of the officers, says: 'It is a very aggressive way of treating former officers injured in the line of duty.

He says if Staffordshire Police win the case, other chief constables could see the pensions of injured officers as legitimate targets for savings

Mr Morgan, who is paid in excess of £150,000, has ordered the reviews of 360 injury pensions since he took over Staffordshire Police in 2017.

His former force, Avon and Somerset Police, abandoned an attempt to review the most costly pensions paid to the youngest and most severely injured officers in the year that he left.

After more than 30 years in the police, Mr Morgan is expected to retire with a gold-plated pension packet paying more than £100,000 a year.

The chief constable, who has denied the reviews are a money-saving move, sobbed earlier this year when discussing strained police resources in a BBC documentary.

He told the TV crew: 'We've had difficult choices to make, where you prioritise the limited resource you've got. My job is to try and balance those competing needs ... It does weigh heavily on you.'

Solicitor Ron Thompson, who is representing the other 11 former officers against Staffordshire Police, said he had taken on hundreds of cases on behalf of injured officers whose pensions were under threat since the cuts began in 2010.

He says: '[Police forces] are all looking to save money from somewhere. Often these injured former police officers are a soft target.

These officers have lost their policing careers as a result of carrying out their duties. They only want what they are entitled to. Nothing more, nothing less.'

The Injury on Duty Pensioners Association (IODPA), a charity set up to help injured officers, says it has seen increased attempts to 'circumvent regulations' in order to cut pensions.

It adds that more than 50 judicial reviews had been launched against forces trying to review the pension awards — with 80 per cent of them won by injured officers.

n IODPA spokesman says: 'Police officers who have been injured through no fault of their own should be treated respectfully, with compassion and, most importantly, lawfully.

'What we are seeing are more and more officers being subjected to unlawful demands. This is often at a time when the officer is at their most vulnerable and needs the support of their force.

'We understand that forces, with their ever-reducing budgets, may face difficult times, but targeting their injured officers for savings is not the appropriate solution.'

After uproar, Avon and Somerset Police eventually abandoned its attempt to review the pensions of its injured officers, which were costing it £5.5 million a year.

One of the force's injured officers says: 'The mental trauma it causes is huge. It is destroying lives. You are sold the line that if you get injured, you will be looked after. But if you are, you are cast aside.'

Many forces do not go back over injury pension payments. The country's largest, the Metropolitan Police, does not — despite the pensions costing the force close to £30 million a year.

A spokesman says: 'The Met has an enduring responsibility to our officers who must retire on ill-health grounds linked to an injury sustained in the course of their duty serving the public.

'We are confident in our process to award an injury payment in such circumstances, so would only review in cases where a former colleague asks us to, due to a significant change in their circumstances.'

Chief Constable Matt Jukes, the National Police Chiefs' Council lead for pay and conditions, says: 'While chief constables are always mindful and diligent when spending public money, they fully recognise the commitment, contribution and sacrifices made by officers.'

The judicial review is due to be heard at Birmingham Administrative Court today and Thursday. A Staffordshire Police spokesman says: 'No change to the claim- ants' pensions has been implemented pending the outcome of those proceedings.'

It’s a disgrace. Officers who have put themselves in harms way on a daily basis are often injured. Those who are badly injured are retired from their force because that officer can no longer perform a good days work, and now they are trying to take away from them the compensation for their injuries. Unbelievable.

0 Cancel Reply
It’s a disgrace. Officers who have put themselves in harms way on a daily basis are often injured. Those who are badly injured are retired from their force because that officer can no longer perform a good days work, and now they are trying to take away from them the compensation for their injuries. Unbelievable.
Cancel Update Comment

Terror attack illegal firearms welfare Metropolitan Police Armed Police Numbers Welfare Support Programme PFEW AFO West Mids Police Mental Health wellbeing Police Scotland Home Office College of Policing NPCC Terror Threat PFOA Armed Police WSP Protect The Protectors Taser PTSD Assault on Police ARV Firearms Officers
I have recently been medically retired from the police with PTSD following a serious injury on duty a few years ago. I would not be here if it was not for the PFOA - they literally saved my life. In February 2017 I was long-term sick off of work and I was in a very bad place. Whilst I have been unable to continue as a serving officer, I will forever be indebted to the PFOA. I will never be able to repay them for all that they did. All I can say is thank you so much from me and my family.
PFOA assisted by offering counselling/coaching support to officer’s family. A respite break was granted to allow the officer and his family to get away and spend some valuable time together as a family unit.
The PFOA purchased a new cross trainer and have loaned this to the officer to enable him to remain active and hopefully return to Ops.
PFOA arranges support for the officers involved prior to the Inquest and after by way of a respite breaks and NLP Coaching or Counselling.
I would like to personally thank the PFOA for the gifts we received for our daughter. The timing could not have been better. the week the gifts arrived, she had lost her hair and was due to go back to hospital for her next round of chemotherapy treatment which she was not looking forward to. Opening the parcel put a big smile back on her face for two reasons. firstly, because you had chosen as gifts exactly what she would have chosen for herself. But secondly and more importantly, because she realised other people ere also thinking of her and willing her to get better. People she had never met.
Thank you so much for the shopping vouchers, they will come in very handy. Thank you for helping my daddy to be himself again. Keep helping police officers because some people don’t understand how hard it can be and they are doing a great thing.
This act of kindness was greatly appreciated by us both at what is a very difficult time for our family.
© 2017 PFOA - Police Firearms Officers Association
Head Office: Chatteris Police Station, 18 East Park Street, Chatteris,
Cambridgeshire PE16 6LD - Tel: 01354 697 890
Email: info@pfoa.co.uk