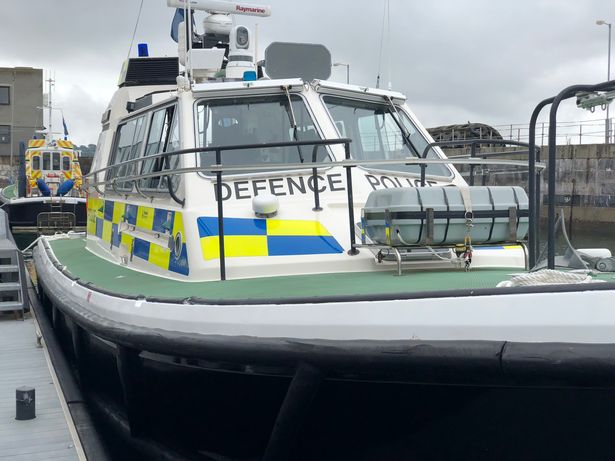 As large as Plymouth Sound is, it can be a veritable people-soup once bathers, kayakers, yachties, speedboats, jet-skis, luxury cruisers, military craft, fishing vessels, windsurfers and paddle boarders all take to the water.

Making sure everyone gets along is a task which often befalls the ‘cops of the sea’, the Ministry of Defence Police’s marine unit, which is based within the long wall of HMS Drake and as expected, sits in a prime position overlooking the River Tamar.

While the land is the domain of Devon and Cornwall Police, it’s fair to say Insp Tony Micallef’s team of 60 officers are the constables of the local waters.

In fact they have a patch of nearly 200 square miles, which includes the historic two-and-a-half mile long militarised waterfront, said to be one of the biggest naval bases in Western Europe.

As a team of officers, they have access to five large 14m vessels, a number of large and small Rigid Inflatable Boats (RIBS), firearms – it is a military base, after all – and similar specialist resources employed by the civilian policeforce.

Insp Micallef is quick to point out that his officers have to be particularly specialised in their skill set, such as in the use firearms.

He said: “Our officers have the same training as civilian officers on land, but we also have to be trained in the use of firearm tactics on the water. We have to be able to fire from a moving platform if necessary.”

As members of the MoD Marine Unit, they can be deployed anywhere in the world if necessary and so many have operated in combat and peace-keeping locations. Search-trained officers aren’t just ready to look for drugs and cash, they also have to be on the lookout for Improvised Explosive Devices (IEDs), so that when, for instance, Queen Elizabeth II comes to Devonport to attend the decommissioning of HMS Ocean, there are no nasty surprised anywhere on land or sea.

“We ensure there is a 50m exclusion zone around the dockyard waterfront.

“Our main responsibility is to protect the integrity of the naval base – to detect, deter and deny hostile reconnaissance. We give a physical barrier between the sea and the naval b

In additional to the naval base at Devonport the team is also responsible for protecting the defence munitions establishment of RNAD Ernesettle.

The role entails the team have to be on patrol in all weathers, 24/7, 365 days a year and with at the national security threat level still at severe they have to be in a heightened awareness state round the clock, as well as carrying out their usual daily tasks of patrolling, investigating and making sure the routes to and from the naval base are clear for warships and submarines.

Their continued presence on the water means they end up being the first on scene at a lot of emergency situations, such as sailors who get into difficulty or vulnerable people seeking to harm themselves at various points along the shoreline or from specific access points to the water.

Insp Micallef said: “We want people to enjoy being on the water, but we also want people to be safe. We do deal with a number of public safety issues and regularly assist Devon and Cornwall Police assisting them with cases of vulnerable people and missing persons.

"We are frequently involved in searching the waterways and shorelines across our entire patch and we are often the first on the scene and routinely engage in cases involving emotionally vulnerable people.”

They also find themselves acting as the friendly neighbourhood beat officer on the waters, often having a quiet word in some seafarer’s ear about their behaviour and unsurprisingly the summer months mean more words of advice and appeals for people to play nicely with others while they’re at sea.

While not wanting to single out any particular kind of recreational user of the waterways, Insp Micallef accepts that his team are often requested by the public to tackle antisocial behaviour by jet-ski owners, some of whom pay little heed to speed restrictions or bathing spots.

Along the shoreline Plymouth has a number of restricted areas where swimmers can hopefully enjoy a safe swim, but the marine unit have received complaints about fast moving vessels who ignore these safety zones.

Some jet-ski users get a bad reputation for acting like the Sound is their personal playground, whizzing around more sedate yachts and kayakers. In addition to the complaints from other water users, the marine team receive angry complaints from local residents who are fed up with the roaring engines near their waterfront homes.

Insp Micallef said: “We communicate information we receive with our colleagues at Devon and Cornwall Police, such as the description of the jet-skis, any trailers or vehicles linked to them. There is a transient nature to these boat-users because they sometimes just visit the once during the summer or turn up on rare occasions.

"Added to which, unlike our counterparts on land, it’s not as easy to pull someone over on the water. A lot of what we do is about education, explaining the various rules of the water, encouraging people to act responsibly and share the water.”

Insp Micallef said: “Regrettably, in the course of our work we come across boat users who are ill-equipped to be out on the sea. We would appeal to all boat owners who use this beautiful and busy harbour to treat the sea with respect.

“Don’t take fine weather or the reliability of your boat for granted. Take the right kit with you; if you need it, you need it with you, not at home.”

The MoD Police Marine Unit, working on behalf of the QHM, can issue warnings, cautions and can prosecute water users who do not comply with the regulations for operating within the Port of Plymouth.

Firefighters to be trained as police officers for seven Devon towns

NPCC Armed Police PFEW PTSD Terror attack AFO Welfare Support Programme ARV illegal firearms College of Policing Home Office Assault on Police Metropolitan Police WSP Firearms Officers Police Scotland welfare Taser PFOA wellbeing West Mids Police Mental Health Protect The Protectors Armed Police Numbers Terror Threat
I have recently been medically retired from the police with PTSD following a serious injury on duty a few years ago. I would not be here if it was not for the PFOA - they literally saved my life. In February 2017 I was long-term sick off of work and I was in a very bad place. Whilst I have been unable to continue as a serving officer, I will forever be indebted to the PFOA. I will never be able to repay them for all that they did. All I can say is thank you so much from me and my family.
PFOA assisted by offering counselling/coaching support to officer’s family. A respite break was granted to allow the officer and his family to get away and spend some valuable time together as a family unit.
The PFOA purchased a new cross trainer and have loaned this to the officer to enable him to remain active and hopefully return to Ops.
PFOA arranges support for the officers involved prior to the Inquest and after by way of a respite breaks and NLP Coaching or Counselling.
I would like to personally thank the PFOA for the gifts we received for our daughter. The timing could not have been better. the week the gifts arrived, she had lost her hair and was due to go back to hospital for her next round of chemotherapy treatment which she was not looking forward to. Opening the parcel put a big smile back on her face for two reasons. firstly, because you had chosen as gifts exactly what she would have chosen for herself. But secondly and more importantly, because she realised other people ere also thinking of her and willing her to get better. People she had never met.
Thank you so much for the shopping vouchers, they will come in very handy. Thank you for helping my daddy to be himself again. Keep helping police officers because some people don’t understand how hard it can be and they are doing a great thing.
This act of kindness was greatly appreciated by us both at what is a very difficult time for our family.
© 2017 PFOA - Police Firearms Officers Association
Head Office: Chatteris Police Station, 18 East Park Street, Chatteris,
Cambridgeshire PE16 6LD - Tel: 01354 697 890
Email: info@pfoa.co.uk