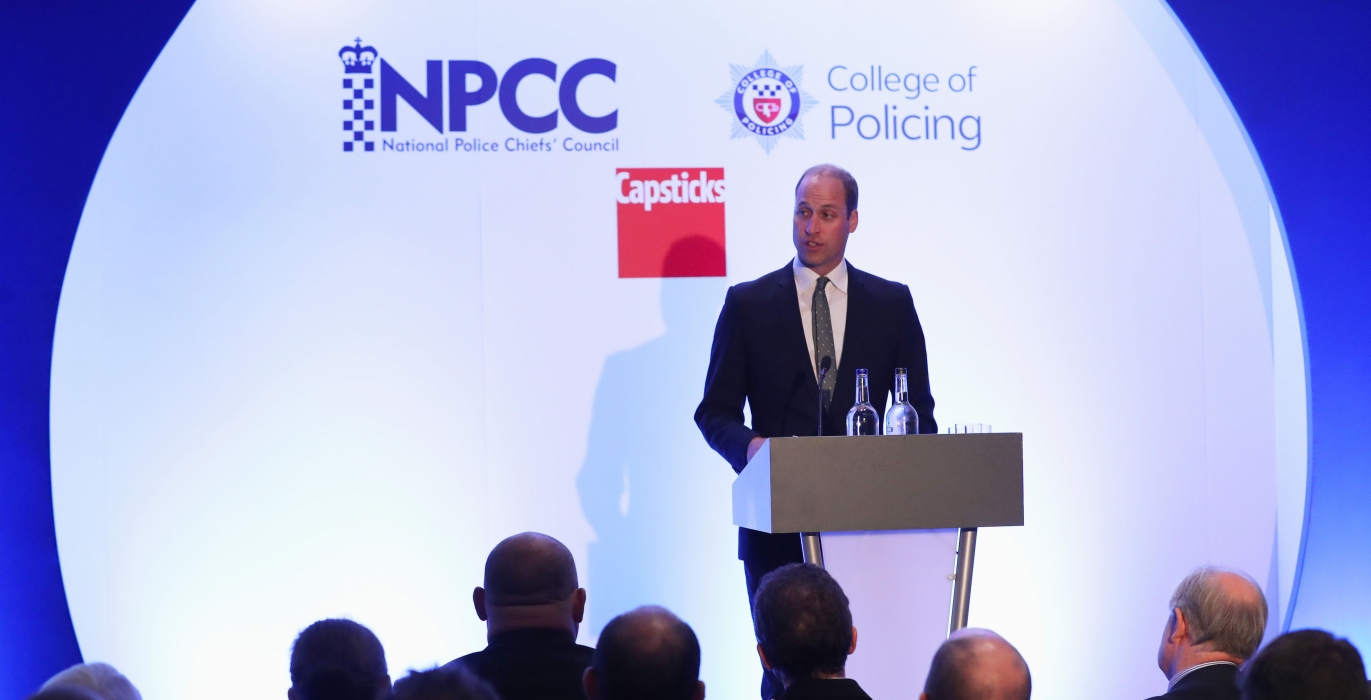 His Royal Highness - The Duke of Cambridge gave a speech this morning at the National Mental Health and Policing Conference.

Thank you, Chief Constable. And thank you very much for inviting me here today.  I am extremely grateful to have the opportunity to join you all today as you discuss some important topics, which I know you've been speaking about.

I'd like to start, if I may, by acknowledging the role you play in our society and the considerable pressures you are under.  The police service only ever seems to make the news when one of two things happen: either a terrible tragedy or atrocity occurs, and quite rightly the police are praised for their extraordinary bravery and sacrifice.  Or at the other end of the spectrum, a decision is held up to account and censor.

Amidst all this, the reality of policing day to day is often overlooked. Your officers face the most difficult and chaotic elements of society every day: broken families; serious injury; terrifying assault; alcohol and drugs abuse; trying to maintain the peaceful and ordered society that most of us take for granted, and to do so whilst maintaining the British concept of policing by consent. It's a really difficult job, and the fact that it goes on every day under our noses without most of us noticing is testament to your skill in doing it.  Our whole way of being as a nation owes its peaceful existence to what you do, day in day out; and we are very proud of you.

One of the things that I most enjoy about travelling overseas is observing how different nations do policing.  There are some terrific examples, but I can honestly say that I have never encountered a culture of policing as it is in this country – discreet, low-key, with a sense of humour and great common sense.  It would probably be diplomatically remiss of me to name countries whose policing is different to this.  I would never be permitted to make a speech again if I did!  So I won't name anyone … but, as an aside, one of my favourite moments on an overseas trip a few years ago was watching two rival tiers in a police force – one local, one state – vying for supremacy to escort a convoy I was in.

The two motorcycle groups repeatedly bumped into one another at high speed, nudging one another off the road, until one force caved in and relinquished the road in favour of the other.  What was very funny was that the visit was semi-private but I think that by the end of my very first journey the whole city knew I was there. Discreet policing it was not!

Policing by consent – in the way that you do it, and for which British police services are so rightly praised around the world – is hard work.  Policing is physically and mentally tough.  The stresses of uncertain and tense situations take their toll.  It is also hugely rewarding and at times enjoyable, and I know many of you talk about a policing family.

You have been talking this morning about the issue of mental health and the impact it has on policing.  One in four adults will experience a mental health problem, so it is perhaps not a surprise that an estimated one third of all policing demand is connected to a vulnerable person in mental distress. This has a significant impact on policing time and effort, and it can also have a personal impact on those on the front line dealing with these cases. As a former RAF Search and Rescue and Air Ambulance pilot, I know what this feels like.

Over the past two years I worked with the East Anglian Air Ambulance alongside the police and other emergency services. My team was frequently tasked to help people in extreme distress, and I know I was not alone in being affected by some of the calls I attended. One of my first call outs was to a young man who had taken his own life. Looking at the statistics, I was astounded by how prevalent this was. Suicide is the biggest killer of young men in this country. Not cancer, knife crime, or road deaths – but suicide. This had a big impact on me.

I was very fortunate to work with a team where we were encouraged to talk through the things we had seen when we returned to base.  There were days when, like you, we would have to watch our colleagues save some lives, and lose others. We saw traumatised parents dealing with the shock of having children involved in catastrophic accidents.

There were patients we lost who we fought hard to save. I know that these real life tragedies can stay with you for a long time afterwards – even when we like to pretend they don't.

Being a member of the emergency services takes considerable mental strength and resilience, and I believe there is more that we can and should do to support all first responders to look after their mental health. You are skilled at helping people in extreme distress – so you should be looked after just as much.

Members of the police service are twice as likely to suffer from mental health problems as the general public. The recent Police Federation survey also showed that officers fear disclosing mental health problems due to stigma, the reaction they would receive from supervisors and colleagues, and the possible impact on their careers. Two thirds of respondents had come to work, despite serious concerns about their mental well-being.

This issue is by no means confined to the police force – the fear of stigma and a negative reaction is common in many workplaces. Over the past 18 months, through our Heads Together campaign, Catherine, Harry and I have been working with leading charities to change the conversation about mental health, and I'm really pleased MIND is here today. Don't get me wrong: there is a place for a stiff upper lip, and for a sense of humour to help get through a situation.  But there is also a place for openness and mutual support – that has to be part of the mix and, till now, it has not been sufficient.  Our aim has been to help tackle the stigma surrounding the issue, and to make it easier for people to get help as soon as they need it, without worrying what others will think of them.

We are beginning to see progress, with more people talking about mental health than ever before, but we still have a long way to go.

The National Police Chiefs Council and College of Policing have a real opportunity to lead from the front on this issue. Police Officers are quite rightly respected for their courage and bravery. By creating an atmosphere where colleagues feel comfortable to talk openly and honestly about their issues, you can show that asking for support should be seen as a sign of strength, and not of weakness.

There are a number of organisations able to provide immediate support on the phone or online, an in particular, the MIND Blue Light Infoline that offers specialist support for those serving in the emergency services.  I am delighted that MIND’s Blue Light programme is represented here today.  As you may know, it supports many police services across the country to provide simple and easy access to immediate support.​

Building on this work by MIND Blue Light, and the Heads Together campaign, I will be convening representatives of the emergency services to consider ways in which society might better support the work you do.  The tragedy at Grenfell, and the conclusion of my work as an Air Ambulance pilot, spurred me to look into doing what I can to support you in a practical way.

The reason I think all of this is important is that being a first responder is tough enough as it is.  These pressures are not going to go away.  Therefore, it is properly essential you are equipped to withstand the realities of 21st century policing.  If more openness about mental wellbeing is part of the solution, as I believe it is, then I would like to help you with that.

I sincerely hope that the remainder of the day goes very well, and that today marks an important milestone in improving the support that you get and so rightly deserve.

Thank you very much indeed for having me to speak.

welfare Terror attack illegal firearms PSNI Metropolitan Police IPCC Armed Police Numbers Welfare Support Programme Terror Threat Mental Health Protect The Protectors wellbeing Police Scotland Firearms Officers Taser WSP PFOA Home Office ARV PFEW West Mids Police PTSD Armed Police AFO Assault on Police
I have recently been medically retired from the police with PTSD following a serious injury on duty a few years ago. I would not be here if it was not for the PFOA - they literally saved my life. In February 2017 I was long-term sick off of work and I was in a very bad place. Whilst I have been unable to continue as a serving officer, I will forever be indebted to the PFOA. I will never be able to repay them for all that they did. All I can say is thank you so much from me and my family.
PFOA assisted by offering counselling/coaching support to officer’s family. A respite break was granted to allow the officer and his family to get away and spend some valuable time together as a family unit.
The PFOA purchased a new cross trainer and have loaned this to the officer to enable him to remain active and hopefully return to Ops.
PFOA arranges support for the officers involved prior to the Inquest and after by way of a respite breaks and NLP Coaching or Counselling.
I would like to personally thank the PFOA for the gifts we received for our daughter. The timing could not have been better. the week the gifts arrived, she had lost her hair and was due to go back to hospital for her next round of chemotherapy treatment which she was not looking forward to. Opening the parcel put a big smile back on her face for two reasons. firstly, because you had chosen as gifts exactly what she would have chosen for herself. But secondly and more importantly, because she realised other people ere also thinking of her and willing her to get better. People she had never met.
Thank you so much for the shopping vouchers, they will come in very handy. Thank you for helping my daddy to be himself again. Keep helping police officers because some people don’t understand how hard it can be and they are doing a great thing.
This act of kindness was greatly appreciated by us both at what is a very difficult time for our family.
© 2017 PFOA - Police Firearms Officers Association
Head Office: Chatteris Police Station, 18 East Park Street, Chatteris,
Cambridgeshire PE16 6LD - Tel: 01354 697 890
Email: info@pfoa.co.uk