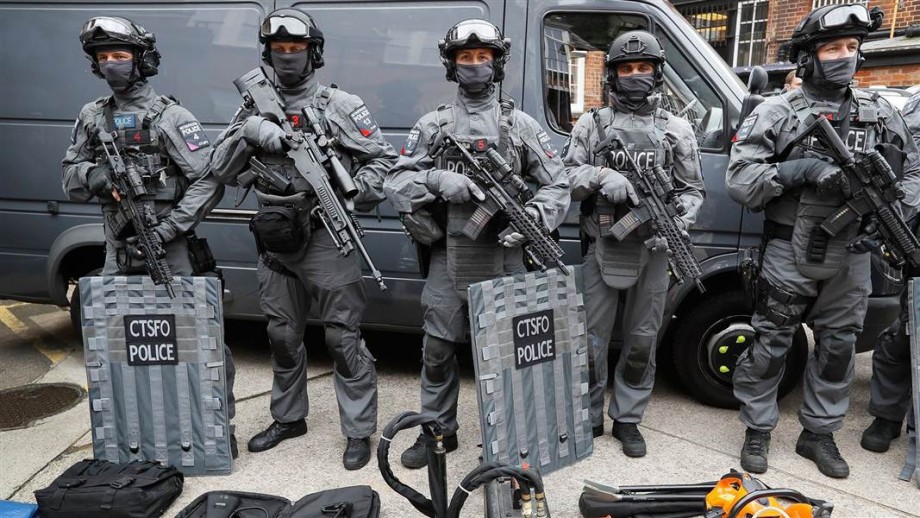 BBC - Britain is upgrading its armed police response to terror attacks, with £114m to fund an extra 1,000 armed police over five years. What capability does this buy, and how prepared is the UK for what is known as a marauding terrorist firearms attack?

Wind the clock back to November 2008 and the answer was - almost totally unprepared.

Over a near two-day period, a 10-man cell of heavily-armed jihadists from Pakistan carried out a prolonged massacre in the heart of India's commercial capital, Mumbai, killing 164 people.

All over the world, police and counter-terrorism officials asked themselves the uncomfortable question: How would we cope if it happened here in our cities?

In Britain there was a realisation that the police would probably be so outgunned that they would likely have to call in military assistance. At the very least, there would be an unacceptably long time gap between the first shots being fired by terrorists and the threat from them being eliminated, during which time large numbers of hostages could quite possibly have been killed.

The national security response was to massively "up-gun" the police response.

New, mobile armouries were introduced with modern high-powered weapons in the back, capable of bringing concentrated firepower onto a terrorist target.

A series of realistic exercises were staged across the country, codenamed "Wooden Pride", involving police firearms officers, snipers, SAS operatives and even lawyers.

Participants were made to take part in mock law courts where they had to explain to a sceptical "judge" exactly why they had pulled the trigger at certain points during the exercise. Today, while patently nowhere is entirely safe from terrorist attack, the precautions put in place have dramatically changed the security environment in London and other cities.

Anyone watching the horrific events in Westminster on 22 March could not fail to notice the speed of the armed police response.

Within minutes of a car being deliberately driven into pedestrians on Westminster Bridge, and the assailant then running into the Palace of Westminster, the whole area was sealed off by heavily armed specialist firearms officers (SFOs) from the Metropolitan Police's Specialist Firearms Command.

They were carrying a mixture of powerful, recently-acquired weapons comprising the Swiss-made Sig Sauer SG516 5.56mm Automatic Rifle, the MCX Carbine variant with its telescopic stock and red dot sight, and the Austrian-made Glock 17 Pistol, a lightweight 9mm 17-round handgun often seen strapped to the right-hand leg.

Another weapon in the SFO's armoury is the German-made Heckler & Koch G36 Carbine.

All of these weapons have been steadily replacing the older Heckler & Koch MP5 Carbines, a familiar sight at Heathrow Airport and often mistakenly called submachine guns, (they are configured to fire single shots, not bursts of automatic fire). The rapid response on 22 March was hardly surprising given that this attack took place in the heart of Whitehall.

But throughout central London police Armed Response Vehicles (ARVs) are constantly patrolling, using BMW X5s with secured armouries in the back.

In theory, these ARVs should never be more than eight minutes away from the scene of an incident.

Similar arrangements exist in other major cities and regions across the country, such as the West Midlands.

They are trained to tackle a wide spectrum of terrorist and hostage situations, including fast-roping down from Eurocopter EC-145 helicopters, and are equipped with a range of specialist equipment.

This includes pump-action shotguns, polycarbonate body shields, chainsaws, crowbars and motorbikes capable of speeds up to 140mph. But all of this "physical" response is, of course, only part of the picture in counter-terrorism.

A major component of stopping attacks takes place out of public sight, much of it in cyberspace, a war waged daily by analysts and codebreakers at GCHQ and MI5.

Tip-offs by the public have also been crucial.

This week the National Police Chiefs Council revealed that in the last two months the police had received more than 3,000 tip-offs by the public about possible terrorist attacks.

Forging that link between the police and communities has taken years of painstaking work in this country, with frequent setbacks, but in several other European countries it is almost non-existent.

So without timely and accurate intelligence no amount of state-of-the-art hardware will prevent the next attack.

NPCC Assault on Police illegal firearms Welfare Support Programme Armed Police Numbers welfare Terror Threat Home Office Mental Health Armed Police AFO PFEW Taser Police Scotland West Mids Police ARV Firearms Officers PFOA wellbeing Metropolitan Police PTSD IPCC Terror attack PSNI WSP
I have recently been medically retired from the police with PTSD following a serious injury on duty a few years ago. I would not be here if it was not for the PFOA - they literally saved my life. In February 2017 I was long-term sick off of work and I was in a very bad place. Whilst I have been unable to continue as a serving officer, I will forever be indebted to the PFOA. I will never be able to repay them for all that they did. All I can say is thank you so much from me and my family.
PFOA assisted by offering counselling/coaching support to officer’s family. A respite break was granted to allow the officer and his family to get away and spend some valuable time together as a family unit.
The PFOA purchased a new cross trainer and have loaned this to the officer to enable him to remain active and hopefully return to Ops.
PFOA arranges support for the officers involved prior to the Inquest and after by way of a respite breaks and NLP Coaching or Counselling.
I would like to personally thank the PFOA for the gifts we received for our daughter. The timing could not have been better. the week the gifts arrived, she had lost her hair and was due to go back to hospital for her next round of chemotherapy treatment which she was not looking forward to. Opening the parcel put a big smile back on her face for two reasons. firstly, because you had chosen as gifts exactly what she would have chosen for herself. But secondly and more importantly, because she realised other people ere also thinking of her and willing her to get better. People she had never met.
Thank you so much for the shopping vouchers, they will come in very handy. Thank you for helping my daddy to be himself again. Keep helping police officers because some people don’t understand how hard it can be and they are doing a great thing.
This act of kindness was greatly appreciated by us both at what is a very difficult time for our family.
© 2017 PFOA - Police Firearms Officers Association
Head Office: Chatteris Police Station, 18 East Park Street, Chatteris,
Cambridgeshire PE16 6LD - Tel: 01354 697 890
Email: [email protected]