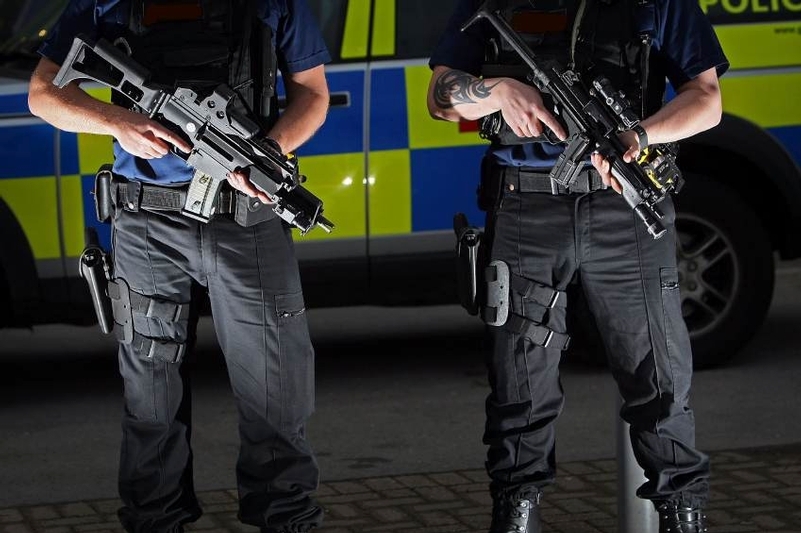 The public in West Yorkshire are to be asked whether police in the county should be routinely armed with guns and Taser electric stun weapons. The local Police Federation, which represents rank and file officers, has launched a survey on the issue alongside an internal poll of its members.

In the first survey of its kind since the spate of terror attacks in London and Manchester earlier this year, officers are being asked if they would be willing to carry a sidearm or a Taser while on duty. The results will be passed onto the West Yorkshire Police command team and the national policing authorities to consider whether there ought to be a change in policy. Questions in the survey include whether the routine arming of police officers will fundamentally change how policing is delivered.Respondents will also be asked if officers should deploy Taser when officers are going out by themselves, whether they would personally be prepared to carry and use Taser and whether officers think carrying Taser would keep them and the public safer.

It will also allow us as a Federation to make effective representation with key stakeholders moving forwards, such as our Command Team, Police and Crime Commissioner and local MPs.” He added that it was “only right and appropriate that we survey the public of West Yorkshire to get their view” on whether the force’s total of authorised firearms officers, currently around 200, and those trained to use Taser, currently around 400, should increase.

He said: “We’ve always policed upon the principle of consent and engagement and we feel that it’s right that we consult the public about these two important issues. Ultimately, it’s the question of, ‘what do the public want the police to do and how best to protect them?’”Currently, only those with two years’ experience are allowed to carry Taser. But it was reported this weekend that senior officers nationwide are urgently reconsidering the restriction.Last week,

Greater Manchester Police announced plans to double the number of officers trained in the use of Tasers to 1,100. Chief Constable Ian Hopkins said the decision was “necessary” in the wake of the recent terror attacks in Manchester and London. In April,

The Yorkshire Post revealed that the number of trained firearms officers by West Yorkshire Police had increased as a result of a review carried out after the Charlie Hebdo attack in France.

.Assistant Chief Constable Andy Battle of West Yorkshire Police said: “The British policing model remains that we are primarily an unarmed service. “We have Taser and firearms capabilities which are deployed in support of our unarmed colleagues and which are regularly reviewed to make sure they are in line with operational requirements to help us keep the public safe.“Nevertheless we will await the results of the Police Federation’s survey and welcome the opportunity to discuss the matter with them in the coming days.”

PFEW Mental Health Terror attack West Mids Police illegal firearms ARV Armed Police Numbers IPCC Firearms Officers Assault on Police WSP Welfare Support Programme Taser PSNI wellbeing Police Scotland PTSD welfare PFOA Home Office Protect The Protectors AFO Armed Police Metropolitan Police Terror Threat
I have recently been medically retired from the police with PTSD following a serious injury on duty a few years ago. I would not be here if it was not for the PFOA - they literally saved my life. In February 2017 I was long-term sick off of work and I was in a very bad place. Whilst I have been unable to continue as a serving officer, I will forever be indebted to the PFOA. I will never be able to repay them for all that they did. All I can say is thank you so much from me and my family.
PFOA assisted by offering counselling/coaching support to officer’s family. A respite break was granted to allow the officer and his family to get away and spend some valuable time together as a family unit.
The PFOA purchased a new cross trainer and have loaned this to the officer to enable him to remain active and hopefully return to Ops.
PFOA arranges support for the officers involved prior to the Inquest and after by way of a respite breaks and NLP Coaching or Counselling.
I would like to personally thank the PFOA for the gifts we received for our daughter. The timing could not have been better. the week the gifts arrived, she had lost her hair and was due to go back to hospital for her next round of chemotherapy treatment which she was not looking forward to. Opening the parcel put a big smile back on her face for two reasons. firstly, because you had chosen as gifts exactly what she would have chosen for herself. But secondly and more importantly, because she realised other people ere also thinking of her and willing her to get better. People she had never met.
Thank you so much for the shopping vouchers, they will come in very handy. Thank you for helping my daddy to be himself again. Keep helping police officers because some people don’t understand how hard it can be and they are doing a great thing.
This act of kindness was greatly appreciated by us both at what is a very difficult time for our family.
© 2017 PFOA - Police Firearms Officers Association
Head Office: Chatteris Police Station, 18 East Park Street, Chatteris,
Cambridgeshire PE16 6LD - Tel: 01354 697 890
Email: [email protected]