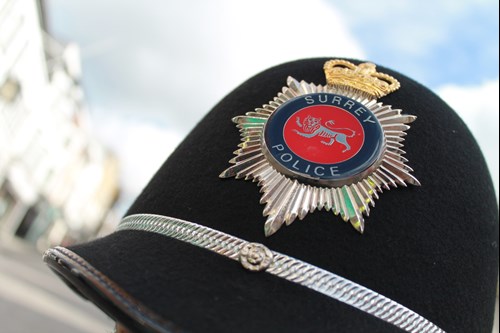 A police officer cleared of wrongdoing after a 16-month Independent Police Complaints Commission investigation has told how the stress cost him his marriage and he is now “bitter and angry” towards a job he used to love.

At a Gross Misconduct hearing this week Sgt Gary Lefort, of Surrey Police, was told he “no case to answer” for a use of force incident in Guildford Custody Suite in 2016.

While saying he feels “vindicated” at the result, for 16 months a cloud has been hanging over Sgt Lefort, who has been on restricted duties. And today he opens up about how the investigation has taken its toll.

“I knew all along I had done nothing wrong,” said Sgt Lefort. “I was carrying out my duties professionally and yet was still subjected to this investigation. I feel that the IPCC already had a conclusion in mind no matter what the evidence.

“The impact this has had on my life and career since 13 May 2016 when I was served notices and restricted from frontline duties has been huge.

“This investigation and subsequent hearing have left me bitter and angry towards the career I love. I did my job to the best of my ability and yet I have had to endure 16 months of stress and anxiety as a result of doing my job.

“My marriage has broken up in large part as a result of the stress of the investigation, with my family having moved to Devon and me having to remain in Surrey.

“I am grateful for the panel finding the correct and proper judgement but can't help feeling vulnerable to investigation by an organisation that in my view lacks independence and seems obsessed with trying to sanction officers and staff doing their best in trying circumstances.”

Mel Warnes, Chair of Surrey Police Federation, said the Staff Association had been supporting Sgt Lefort throughout the investigation.

She added: “This case is just one of many examples of the impact an IPCC investigation has on an officer when they did their job to the best of their ability, and within the boundaries of legislation and practice, with no intention of doing anything wrong.

“The impact of a 16-month long investigation on Gary is clear. An investigation doesn't just restrict a competent officer from their duties, it has an impact financially when pay and morale is already low, it restricts any career aspirations, it impacts on family life, and leaves officers feeling bitter about policing.

“This week it was found that there was no case to answer following a recommendation by the IPCC that Gary faced a Gross Misconduct hearing.

“Police forces have an option to Judicially Review an IPCC decision but this is costly and forces are unlikely to take this course of action with dwindling budgets. So it’s important that the IPCC gets these decisions right.

“Whilst it is of course appropriate that police actions should be independently scrutinised, I feel that often the IPCC appear to be politically motivated – and to be seen to be justifying their existence – in investigating officers working within their scope of practice.

“Too often the IPCC demonstrate a lack of understanding of what police officers have to do. This must end.”

West Mids Police wellbeing Protect The Protectors PTSD IPCC Terror attack Assault on Police WSP welfare illegal firearms PFEW ARV Armed Police Numbers Police Scotland Home Office Welfare Support Programme Firearms Officers AFO Terror Threat PFOA Armed Police Taser Mental Health Metropolitan Police PSNI
I have recently been medically retired from the police with PTSD following a serious injury on duty a few years ago. I would not be here if it was not for the PFOA - they literally saved my life. In February 2017 I was long-term sick off of work and I was in a very bad place. Whilst I have been unable to continue as a serving officer, I will forever be indebted to the PFOA. I will never be able to repay them for all that they did. All I can say is thank you so much from me and my family.
PFOA assisted by offering counselling/coaching support to officer’s family. A respite break was granted to allow the officer and his family to get away and spend some valuable time together as a family unit.
The PFOA purchased a new cross trainer and have loaned this to the officer to enable him to remain active and hopefully return to Ops.
PFOA arranges support for the officers involved prior to the Inquest and after by way of a respite breaks and NLP Coaching or Counselling.
I would like to personally thank the PFOA for the gifts we received for our daughter. The timing could not have been better. the week the gifts arrived, she had lost her hair and was due to go back to hospital for her next round of chemotherapy treatment which she was not looking forward to. Opening the parcel put a big smile back on her face for two reasons. firstly, because you had chosen as gifts exactly what she would have chosen for herself. But secondly and more importantly, because she realised other people ere also thinking of her and willing her to get better. People she had never met.
Thank you so much for the shopping vouchers, they will come in very handy. Thank you for helping my daddy to be himself again. Keep helping police officers because some people don’t understand how hard it can be and they are doing a great thing.
This act of kindness was greatly appreciated by us both at what is a very difficult time for our family.
© 2017 PFOA - Police Firearms Officers Association
Head Office: Chatteris Police Station, 18 East Park Street, Chatteris,
Cambridgeshire PE16 6LD - Tel: 01354 697 890
Email: [email protected]