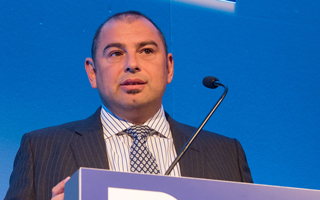 Post Incident Procedures (PIPs) are not only for specialists – they can affect any officer any time.

This was the take-away message from the Federation’s annual PIPs seminar,which was held at Hinckley, Leicestershire on 15-16 October, and attended by 225 delegates and speakers.

PFEW Vice-Chair, Ché Donald summed up the importance of PIPs when he said: “Whether you are an officer involved in a serious incident or the family of someone who has lost their life, PIPs can deliver the best possible outcome following a traumatic or life-changing event.”

Now in its third year, this was the most interactive PIPs seminar to date. Audience questions played a large part and volunteers were even invited to try a  VIPER Firearms Training simulator as part of a session entitlrd 'Shoot Don't Shoot'.

Scenarios including a hostage situation, a drugs den and an armed man threatening to shoot himself, were shown on screen as volunteers armed with laser enabled guns had a split second to decide whether to shoot. The exercise also prompted a discussion around perception and distortion as tunnel vision comes into place in the moment an officer is faced with a life or death situation.

It was agreed that Body Worn Video (BWV) is vital tool in the aftermath of a death or serious injury involving police contact but the officers’ ‘honestly held belief’ remains key to understanding the outcome and whether blame should or should not be apportioned.

Lawyer Mark Wardley told the seminar that police dog bites should be considered under PIPs, adding that it “fits the definition of a serious injury and we need to be ready”.

He said: “The new statutory guidance does offer some wriggle room and is much better now than it was in its original form when it first came out in 2014. But the APP has been tested in court and if you stick to it, you can’t go wrong.”

Mr Chesterman also tackled issues around the separation of officers – this makes people who have just been through a life-changing incident feel like suspects rather than witnesses he said – and discussed the issue of anonymity in today’s world of body worn video.

The seminar also heard from the Federation’s National Custody Forum Chair Chris Bentley who said PIPs was not always easy to accommodate in the custody arena. “At 3am where are you going to find three custody sergeants and seven jailers needed for the 39 other detainees being held that night?” he said. Chris called for better PIPs training for non-police custody staff such as detention officers and custody nurses.

Cambridge University and Police Dependants’ Trust researcher, Dr Jess Miller, unveiled some new work around trauma processing for police officers, and Essex Police Federation Chair Steve Taylor presented a training video which explains the PIPs process. The seminar also heard from lawyer Tim Coolican from Slater & Gordon spoke about the process of applying for anonymity, and some of the pitfalls.

Federation Chair, John Apter, underlined the importance of working closely with other organisations such as the police watchdog, the Independent Office for Police Conduct, Professional Standards staff and local unions, saying: “I accept that we are not always going to agree, but it’s how you disagree that matters. We have to keep the conversations going and work together. It’s not about being too cosy with them, it’s about being challenging.”

John also congratulated his Vice Chair on the success of the seminar, as Ché Donald prepares to hand over the reigns of future events. In closing it was noted that the benefits of good post incident procedures (PIPs) can make all the difference between ‘career death’ or keeping the job officers love.

Armed Police welfare Taser NPCC West Mids Police WSP wellbeing Mental Health Welfare Support Programme Metropolitan Police Assault on Police Firearms Officers Terror attack Home Office PFOA Terror Threat IPCC illegal firearms PSNI Armed Police Numbers PTSD PFEW Police Scotland AFO ARV
I have recently been medically retired from the police with PTSD following a serious injury on duty a few years ago. I would not be here if it was not for the PFOA - they literally saved my life. In February 2017 I was long-term sick off of work and I was in a very bad place. Whilst I have been unable to continue as a serving officer, I will forever be indebted to the PFOA. I will never be able to repay them for all that they did. All I can say is thank you so much from me and my family.
PFOA assisted by offering counselling/coaching support to officer’s family. A respite break was granted to allow the officer and his family to get away and spend some valuable time together as a family unit.
The PFOA purchased a new cross trainer and have loaned this to the officer to enable him to remain active and hopefully return to Ops.
PFOA arranges support for the officers involved prior to the Inquest and after by way of a respite breaks and NLP Coaching or Counselling.
I would like to personally thank the PFOA for the gifts we received for our daughter. The timing could not have been better. the week the gifts arrived, she had lost her hair and was due to go back to hospital for her next round of chemotherapy treatment which she was not looking forward to. Opening the parcel put a big smile back on her face for two reasons. firstly, because you had chosen as gifts exactly what she would have chosen for herself. But secondly and more importantly, because she realised other people ere also thinking of her and willing her to get better. People she had never met.
Thank you so much for the shopping vouchers, they will come in very handy. Thank you for helping my daddy to be himself again. Keep helping police officers because some people don’t understand how hard it can be and they are doing a great thing.
This act of kindness was greatly appreciated by us both at what is a very difficult time for our family.
© 2017 PFOA - Police Firearms Officers Association
Head Office: Chatteris Police Station, 18 East Park Street, Chatteris,
Cambridgeshire PE16 6LD - Tel: 01354 697 890
Email: [email protected]