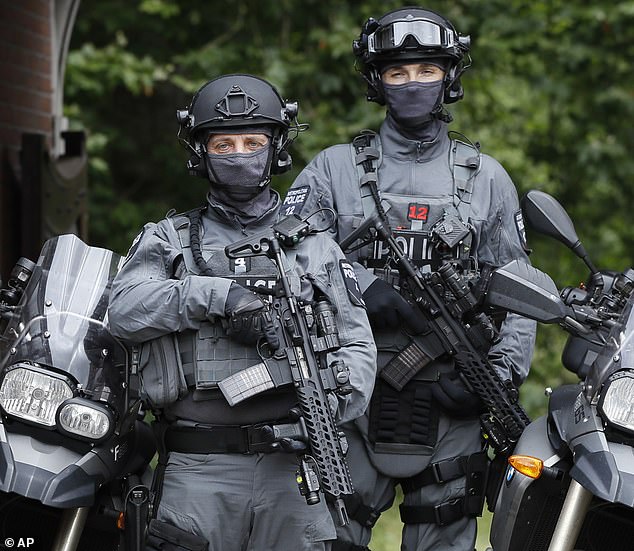 The lives of Britain’s elite soldiers and police officers could be at risk from inadequate new body armour, a safety test carried out for The Mail on Sunday has revealed.

Safety experts said the result of our experiment on the lightweight polyethylene chest plates, increasingly being rolled out among Special Forces, Royal protection teams and anti-terrorism units was ‘alarming’.

And one serving SAS soldier said: ‘I’d sooner go into battle wearing no ballistic protection than using this plate. It shouldn’t have been brought into service.’

The Ministry of Defence and the Home Office have declared the armour safe, but there are fears the tests they used to come to that conclusion are inadequate.

‘The testing process isn’t fit for purpose so lives are being put at risk,’ said defence manufacturer Andrew Kerr, who added that he had raised his concerns officially, but they had been ignored.

The risk comes from what’s called ‘behind armour blunt trauma’, caused as the plate bulges into the body when it absorbs the force of a bullet, and which could cause major injury or even death.

In one of the tests we commissioned at a Government-approved laboratory, a polyethylene chest plate was put in front of part of a pig’s torso, traditionally used in such tests as it has similar properties to a human body, and shot.

The impact caused severe damage, ripping into the heart. After examining photographs, a senior NHS trauma consultant said: ‘These are unsurvivable injuries. The heart has been macerated by the blunt force trauma projected through the plate. This evidence gives genuine cause for concern.

‘There is an urgent need for further study. An enormous amount of force is pushed through the plate even though the plate stops the round. While a human heart has more protection than a pig’s heart, due to the positioning of the chest wall, this is still alarming.’

Yet in the same series of tests, conducted using official standards on variables such as the speed of the bullet, the armour passed MoD and Home Office safety limits.

Neither body makes public which body armour plates they use, citing security reasons, so our experts chose a make commonly worn around the world.

The first test replicated the process used by the Government when a plate is mounted in front of a clay mould and a 7.62mm round fired into it from a set distance.

The depth of the indentation the impact made in the clay through the armour was 24mm – less than the 25mm maximum required by the Home Office and the 44mm MoD limit, also used by other countries.

But that same impact force was enough to cause such major damage to the pig. In comparison, tests on the heavier ceramic plates, which the plastic ones are replacing, showed there was no damage to either the clay or the pig, which had been humanely killed at an abattoir and was otherwise destined to be sold as food.

Mr Kerr, a former member of the Home Office safety standards committee, said: ‘The standards of 25mm and 44mm are entirely arbitrary, bearing no relation to injuries caused by this trauma.

Lee Trueman, a former police firearms officer and ballistics expert, also said the current tests were inadequate: ‘There would appear to be no direct relationship between the 25mm and 44mm standards to any human injuries.’

Che Donald, of the Police Federation, and Mark Williams, CEO of the Police Firearms Officers Association, last night issued a joint statement saying: ‘Anything that suggests equipment may not be fit for purpose needs to be further investigated as a matter of urgency before any serious injury or loss of life.’

Calling for an investigation, former Shadow Defence Minister John Spellar said: ‘The Mail on Sunday’s findings clearly show the need for a rapid review and update of safety standards to save lives.’

A Government spokesman said: ‘We take the safety of our police officers and Armed Forces extremely seriously.

‘The MoD and Home Office procure various types of body armour, all of which are rigorously assessed using internationally recognised test standards with the relevant roles and threat level in mind. We have not seen any evidence to indicate that the current standards do not provide adequate protection.’

College of Policing Police Scotland AFO welfare Home Office PFOA NPCC WSP Firearms Officers PFEW Terror attack Terror Threat Armed Police Numbers Metropolitan Police Protect The Protectors Welfare Support Programme West Mids Police Taser Armed Police wellbeing PTSD Assault on Police Mental Health illegal firearms ARV
I have recently been medically retired from the police with PTSD following a serious injury on duty a few years ago. I would not be here if it was not for the PFOA - they literally saved my life. In February 2017 I was long-term sick off of work and I was in a very bad place. Whilst I have been unable to continue as a serving officer, I will forever be indebted to the PFOA. I will never be able to repay them for all that they did. All I can say is thank you so much from me and my family.
PFOA assisted by offering counselling/coaching support to officer’s family. A respite break was granted to allow the officer and his family to get away and spend some valuable time together as a family unit.
The PFOA purchased a new cross trainer and have loaned this to the officer to enable him to remain active and hopefully return to Ops.
PFOA arranges support for the officers involved prior to the Inquest and after by way of a respite breaks and NLP Coaching or Counselling.
I would like to personally thank the PFOA for the gifts we received for our daughter. The timing could not have been better. the week the gifts arrived, she had lost her hair and was due to go back to hospital for her next round of chemotherapy treatment which she was not looking forward to. Opening the parcel put a big smile back on her face for two reasons. firstly, because you had chosen as gifts exactly what she would have chosen for herself. But secondly and more importantly, because she realised other people ere also thinking of her and willing her to get better. People she had never met.
Thank you so much for the shopping vouchers, they will come in very handy. Thank you for helping my daddy to be himself again. Keep helping police officers because some people don’t understand how hard it can be and they are doing a great thing.
This act of kindness was greatly appreciated by us both at what is a very difficult time for our family.
© 2017 PFOA - Police Firearms Officers Association
Head Office: Chatteris Police Station, 18 East Park Street, Chatteris,
Cambridgeshire PE16 6LD - Tel: 01354 697 890
Email: info@pfoa.co.uk