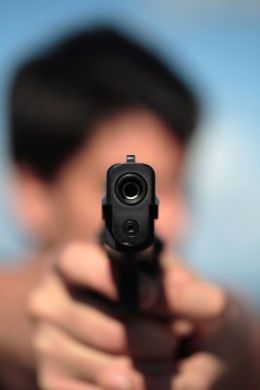 Police have warned that teenagers are putting themselves in danger if they brandish ‘fake’ firearms in the streets.

Officers have previously highlighted that the dangerous practice always gets worse in the summer, as youngsters have far more time on their hands.

In one terrifying incident West Midlands Police said a 16-year-old was just “two millimetres” from being shot in the chest after armed police responded to reports he was carrying a gun.

Police highlighted the case after a huge rise in the number of incidents involving ‘fake’ guns on the city’s streets.

Chief Superintendent Rachel Jones, force lead for gun crime, said : “We will not tolerate the recent surge in gun crime and will continue to bring perpetrators to justice.”

The spate of gun crime means that the force is on heightened alert - the Mail has covered many instances of armed officers involved in incidents in recent weeks.

In just three months last year - in the run up to summer, of people carrying replica, ball bearing (BB) or air guns in public.

An incident took place in Erdington High Street where a 16-year-old was just “two millimetres” from being shot in the chest after armed police responded to reports he was carrying a gun.

The teenager and his friend had been seen with a gun tucked into the waistband of his trousers and a member of the public made a 999 call.

The boy had a BB gun on him, and without appearing to consider the consequences, he withdrew it in front of the officers, causing both policemen to draw their own weapons.

An officer who attended the incident later said he was just millimetres from pulling the trigger and shooting the teenager.

At the time Constable Rob Pedley, from West Midlands Police firearms unit, said: “The officer drew his gun and he squeezed the trigger and saw the hammer coming back and knew if he squeezed another two to three millimetres he would be shooting this person in the chest. It could have been a lot more serious.”

Inspector Richard Webb, from the firearms unit, has blamed the increased availability of the weapons online and a ‘gaming culture’ for the spike in recent fake firearm incidents.

He said: “There is just no excuse for carrying these weapons in the street and my message is that people should just not do it in the first place.

“The availability of the guns is one of the issues and the other is a gaming culture where some younger people seem to be replicating what they have done in a virtual world without considering the very real consequences in the real world.

“They could come face-to-face with armed police officers because that is how we respond to reports of a gun.”

In three years to 2015 air pistols, ball bearing and pellet guns resulted in 524

crimes reported to police in the West Midlands over the past three years – equivalent to one every other day.

More than 160 cases involved minor injuries, but 19 also involved ‘serious’ injuries with piercing of the skin.

Last summer West Midlands Police launched a campaign to raise awareness about the dangers of carrying replica guns after the spate of scares sparked by fake firearms.

One incident even saw motorway police impose a rolling road block on the M42 while an Armed Response Vehicle (ARV) intercepted a BMW heading south near junction five.

A passenger had been seen at Keele Services pointing a firearm from a window, but officers discovered the men had been “messing around” with a BB gun bought during a lads’ trip to Blackpool.

Detective Inspector Jim Colclough said it was important to raise awareness ahead of a predicted summer increase in replica gun-related emergency calls.

He said: “Some of these air weapons are very realistic. We always want people to report their concerns to us, the last thing we want is a blasé attitude and someone assuming it’s probably a BB gun.
Our armed officers always have to treat callouts seriously, they can’t let their guard down and would treat the incident as a genuine threat until it becomes apparent they aren’t dealing with a live firearm.

“We’re reaching out to parents, teenagers and schools to hammer home the message that anyone carrying or using a BB gun in public could quickly find themselves at the centre of an armed response by firearms officers.”

It is an offence to carry an air weapon in public without a reasonable excuse, which might include carrying a weapon to and from a shooting club or taking a new weapon home from a dealer.

To report suspicions of firearm possession call West Midlands Police on the 101 number or Crimestoppers anonymously on 0800 555111. In an emergency dial 999.

welfare Mental Health AFO WSP ARV Taser Terror attack Police Scotland Welfare Support Programme Terror Threat Protect The Protectors wellbeing Armed Police Numbers PFEW PTSD College of Policing Home Office illegal firearms Assault on Police Metropolitan Police PFOA NPCC West Mids Police Firearms Officers Armed Police
I have recently been medically retired from the police with PTSD following a serious injury on duty a few years ago. I would not be here if it was not for the PFOA - they literally saved my life. In February 2017 I was long-term sick off of work and I was in a very bad place. Whilst I have been unable to continue as a serving officer, I will forever be indebted to the PFOA. I will never be able to repay them for all that they did. All I can say is thank you so much from me and my family.
PFOA assisted by offering counselling/coaching support to officer’s family. A respite break was granted to allow the officer and his family to get away and spend some valuable time together as a family unit.
The PFOA purchased a new cross trainer and have loaned this to the officer to enable him to remain active and hopefully return to Ops.
PFOA arranges support for the officers involved prior to the Inquest and after by way of a respite breaks and NLP Coaching or Counselling.
I would like to personally thank the PFOA for the gifts we received for our daughter. The timing could not have been better. the week the gifts arrived, she had lost her hair and was due to go back to hospital for her next round of chemotherapy treatment which she was not looking forward to. Opening the parcel put a big smile back on her face for two reasons. firstly, because you had chosen as gifts exactly what she would have chosen for herself. But secondly and more importantly, because she realised other people ere also thinking of her and willing her to get better. People she had never met.
Thank you so much for the shopping vouchers, they will come in very handy. Thank you for helping my daddy to be himself again. Keep helping police officers because some people don’t understand how hard it can be and they are doing a great thing.
This act of kindness was greatly appreciated by us both at what is a very difficult time for our family.
© 2017 PFOA - Police Firearms Officers Association
Head Office: Chatteris Police Station, 18 East Park Street, Chatteris,
Cambridgeshire PE16 6LD - Tel: 01354 697 890
Email: info@pfoa.co.uk