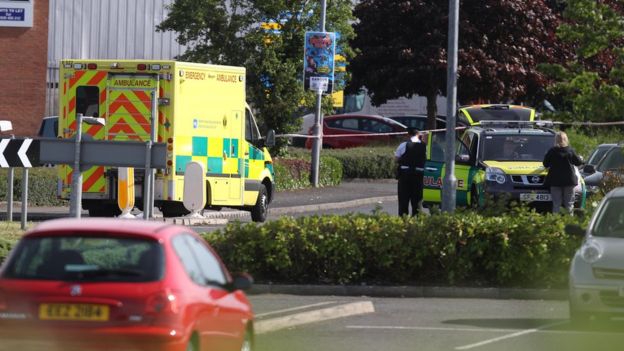 BBC News - Police are investigating a possible link between a man's murder in a supermarket car park and a loyalist paramilitary feud.

Colin Horner, 35, was shot in front of his three-year-old son at Balloo Link, Bangor, at 14:45 BST on Sunday. He was a friend of loyalist Geordie Gilmore who was shot dead in March in a feud between factions of the Ulster Defence Association (UDA).

Police believe dashcam footage from other motorists could prove vital. They want to trace Mr Horner's movements between the time that he left the Rathgael area of Bangor, where he was living, at 13:30 BST and 14:30 BST when he arrived at the car park.

They also want to find out more about a red Ford Mondeo car with false number plates which was seen leaving the scene of the shooting - it was later found burnt out near the Six Road Ends. Speaking at a press conference on Monday, Det Supt Richard Campbell said Mr Horner was murdered in a "very brutal" and "completely reckless" way. "We know that he went into the store with his son for about ten minutes, got back in his car, put his son in the rear and was just about to get into car," he said. "He was approached by a single gunman, we believe." The police officer said Mr Horner was hit three times and died in hospital. He said the child was immediately beside his father when he was shot in what he called a "hugely barbaric act". One stray bullet hit another vehicle. Police have described the killing as a "brutal, senseless and horrendous" attack that Mr Horner's son will carry with him throughout life. It is understood the gunman was wearing a dark hoody with the hood up and had his face covered.

Ulster Unionist North Down MLA Alan Chambers, who arrived at the car park about 10 minutes after the shooting, said the scene was "surreal". "There was a casualty on the ground, there was about six paramedics round the person working very, very hard with CPR and also administering fluids to him," he said. "They worked on him for maybe 45 minutes, they put him then onto a trolley and moved him into an ambulance and worked on him in the ambulance for another 20 minutes and then the ambulance left the scene with a police escort." Mr Chambers said hundreds of people were there, unaware of what had happened. "On a sunny bank holiday weekend, as a man lay fighting for his life, people were walking by blissfully unaware of what happened carrying tins of paint and wallpaper under their arms," he said.

Northern Ireland Secretary James Brokenshire said the Bangor community would be "deeply shocked" by this murder. "To shoot someone in a busy supermarket car park in sight of children and shoppers shows a brutality and recklessness that will not be tolerated," he said. "The PSNI are doing all they can to bring to justice anyone involved."

DUP MLA Gordon Dunne said people were in "shock and disbelief" at what had happened. "This was something we thought was past us, but, sadly, on occasions, is still with us," he told BBC Northern Ireland's Good Morning Ulster. Mr Dunne said any suggestion of a link to a loyalist feud was "speculation". "Whoever is responsible must be brought before the courts for this terrible deed," he said. The DUP MLA said community relations were extremely good in Bangor and, as he and his colleagues were canvassing for the forthcoming election, they had a sense that things were "stable and settled".

Alliance North Down MLA Stephen Farry said the shooting had "sent shockwaves" throughout the town. "My thoughts are with the loved ones of the man shot dead. There can never be any excuse for carrying out such an act, which has left a man dead and a family mourning," he said. "Violence has no place in our society and those who carried out this attack must be taken off the streets. I would urge anyone with information on it to contact police immediately."

Sinn Féin MLA Chris Hazzard condemned the shooting. "Whoever was behind this shooting wants to drag us back to the past. It will not happen," he said

Green Party MLA Steven Agnew said the murder was "very shocking". "This took place in broad daylight on a busy shopping day, with children and families present. A large number of people will have been shocked by this incident. Anyone who has witnessed or was nearby, undoubtedly, this will live long in their memory."

Firearms Officers PFEW Terror attack Metropolitan Police Home Office PTSD PSNI West Mids Police PFOA Taser IPCC ARV Police Scotland AFO NPCC Welfare Support Programme Assault on Police wellbeing Armed Police Numbers Terror Threat welfare illegal firearms Armed Police Mental Health WSP
I have recently been medically retired from the police with PTSD following a serious injury on duty a few years ago. I would not be here if it was not for the PFOA - they literally saved my life. In February 2017 I was long-term sick off of work and I was in a very bad place. Whilst I have been unable to continue as a serving officer, I will forever be indebted to the PFOA. I will never be able to repay them for all that they did. All I can say is thank you so much from me and my family.
PFOA assisted by offering counselling/coaching support to officer’s family. A respite break was granted to allow the officer and his family to get away and spend some valuable time together as a family unit.
The PFOA purchased a new cross trainer and have loaned this to the officer to enable him to remain active and hopefully return to Ops.
PFOA arranges support for the officers involved prior to the Inquest and after by way of a respite breaks and NLP Coaching or Counselling.
I would like to personally thank the PFOA for the gifts we received for our daughter. The timing could not have been better. the week the gifts arrived, she had lost her hair and was due to go back to hospital for her next round of chemotherapy treatment which she was not looking forward to. Opening the parcel put a big smile back on her face for two reasons. firstly, because you had chosen as gifts exactly what she would have chosen for herself. But secondly and more importantly, because she realised other people ere also thinking of her and willing her to get better. People she had never met.
Thank you so much for the shopping vouchers, they will come in very handy. Thank you for helping my daddy to be himself again. Keep helping police officers because some people don’t understand how hard it can be and they are doing a great thing.
This act of kindness was greatly appreciated by us both at what is a very difficult time for our family.
© 2017 PFOA - Police Firearms Officers Association
Head Office: Chatteris Police Station, 18 East Park Street, Chatteris,
Cambridgeshire PE16 6LD - Tel: 01354 697 890
Email: [email protected]