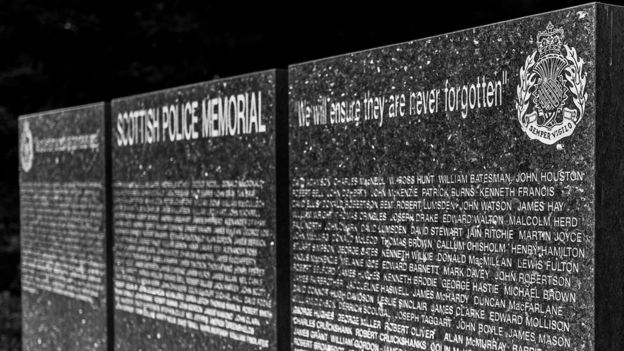 A policeman who died after being shot by an armed robber has been remembered at a special ceremony, a century on from his murder.

PC James Campbell was on patrol in the east end of Glasgow when he was critically injured in January 1919.

His killer, who is thought to have used a revolver smuggled home from World War One, was never caught.

PC Campbell's memory has been kept alive over the years by retired chief inspector Sandy Geddes.

To mark the centenary the Scottish Police Federation commissioned a plaque to honour their fallen colleague, which was officially unveiled in Bannockburn cemetery, Stirling.

The tribute also records the deaths of PC Campbell's two young children, who died within months of their father.

Mr Geddes, 62, first became aware of the story when he was a boy.

He said: "My mother's family were from Cowie and the maternal plot was in Bannockburn Cemetery.

"That's the phrase that sticks in my mind. It planted a seed early on."

Mr Geddes joined Strathclyde Police in 1975 and later became a sergeant in Glasgow's E Division, which covered the same streets once patrolled by PC Campbell.

He diligently researched the case and brought the story to life in the late 1980s in an article for the force's internal magazine.

While on patrol at around 22:30 he disturbed up to four burglars in the back court of a tenement on Great Eastern Road, now Tollcross Road.

PC Campbell managed to grab a member of the gang but the robber broke free and pulled a revolver from his jacket.

He shot the officer twice, in the neck and in the stomach, at point blank range.

Newspaper reports said PC Duncan McLaughlin rushed from Parkhead Cross to his colleague's aid and took a description of the gunman.

But two days later, on 20 January, PC Campbell died from his injuries in Glasgow Royal Infirmary.

The former coalminer, who was originally from Bannockburn, was 39.

At the time of his death PC Campbell had been with the City of Glasgow Police for 18 years and was attached to the Eastern Division.

Hundreds gathered for his funeral and heard Chief Constable J V Stevenson describe him as an officer of "high quality and resource".

The murder weapon is believed to have been smuggled into the country by a returning soldier.

But despite a massive investigation detectives never solved the case.

Mr Geddes' article included an appeal for PC Campbell's modest headstone, which had fallen into disrepair, to be cleaned.

In 1989 a monumental sculptor based in the southside of Glasgow restored the stone and in 2011 Mr Geddes' sister paid for the same procedure.

The former officer, who is now a humanist celebrant, was keen to do something to mark the 100th anniversary and made the SPF aware of the story.

The body, which represents the country's 18,000 rank-and-file officers, agreed to commission a plaque which has been been secured to a wall behind the grave.

The inscription also records the deaths of PC Campbell's six-month-old son, Robert, on 19 April 1919, and two-year-old daughter, Susan, on 10 December 1919.

The SPF has also paid for the headstone, which is 2ft by 18in, to be cleaned.

Mr Geddes, of Lenzie, East Dunbartonshire, said he is grateful to the federation for getting involved.

He added: "I am very pleased that his sacrifice is to be recognised 100 years after his death and that other young boys and girls will be able to read the story of James Campbell."

SPF chair Andrea MacDonald, local MSP Bruce Crawford and Assistant Chief Constable Bernard Higgins were among the dignitaries at the event, which included a piper from the police band.

Ms MacDonald said: "When retired chief inspector Geddes contacted us about the idea of a permanent memorial to Constable Campbell, we were delighted to help.

"It is an honour to pay tribute to an officer who gave his life to the service 100 years ago, particularly as this is also our own centenary year."

Police murders are mercifully rare in Scotland and the last officer killed in the line of duty was PC Lewis Fulton.

The father-of-one was stabbed in the Gorbals area of Glasgow on 17 June 1994.

His widow, Christine, later set up the Care of Police Survivors (Cops) charity in his memory and is the co-founder and secretary of the Scottish Police Memorial Trust.

It maintains a memorial within the grounds of the Scottish Police College at Tulliallan, Fife, which features the names of the 278 officers who have lost their lives on duty in Scotland since 1812.

It is engraved with the words: "We Owe Them A Debt We Can Never Repay. We Will Ensure They Are Never Forgotten."

Ms Fulton said: "PC Campbell was brutally murdered 100 years ago, as a police officer he bravely went towards danger when others ran away.

"It is our duty to pay tribute to that bravery and keep his memory alive, not just for this generation and the next but for every generation to come.

"Policing through the ages has changed but the danger has not. These heroes deserve our support and respect."

West Mids Police Welfare Support Programme PTSD WSP PFOA Metropolitan Police Mental Health Terror attack Protect The Protectors IOPC ARV Assault on Police Home Office AFO Terror Threat wellbeing illegal firearms Taser Firearms Officers College of Policing PFEW Armed Police Numbers Police Scotland welfare Armed Police
I have recently been medically retired from the police with PTSD following a serious injury on duty a few years ago. I would not be here if it was not for the PFOA - they literally saved my life. In February 2017 I was long-term sick off of work and I was in a very bad place. Whilst I have been unable to continue as a serving officer, I will forever be indebted to the PFOA. I will never be able to repay them for all that they did. All I can say is thank you so much from me and my family.
PFOA assisted by offering counselling/coaching support to officer’s family. A respite break was granted to allow the officer and his family to get away and spend some valuable time together as a family unit.
The PFOA purchased a new cross trainer and have loaned this to the officer to enable him to remain active and hopefully return to Ops.
PFOA arranges support for the officers involved prior to the Inquest and after by way of a respite breaks and NLP Coaching or Counselling.
I would like to personally thank the PFOA for the gifts we received for our daughter. The timing could not have been better. the week the gifts arrived, she had lost her hair and was due to go back to hospital for her next round of chemotherapy treatment which she was not looking forward to. Opening the parcel put a big smile back on her face for two reasons. firstly, because you had chosen as gifts exactly what she would have chosen for herself. But secondly and more importantly, because she realised other people ere also thinking of her and willing her to get better. People she had never met.
Thank you so much for the shopping vouchers, they will come in very handy. Thank you for helping my daddy to be himself again. Keep helping police officers because some people don’t understand how hard it can be and they are doing a great thing.
This act of kindness was greatly appreciated by us both at what is a very difficult time for our family.
© 2017 PFOA - Police Firearms Officers Association
Head Office: Chatteris Police Station, 18 East Park Street, Chatteris,
Cambridgeshire PE16 6LD - Tel: 01354 697 890
Email: info@pfoa.co.uk