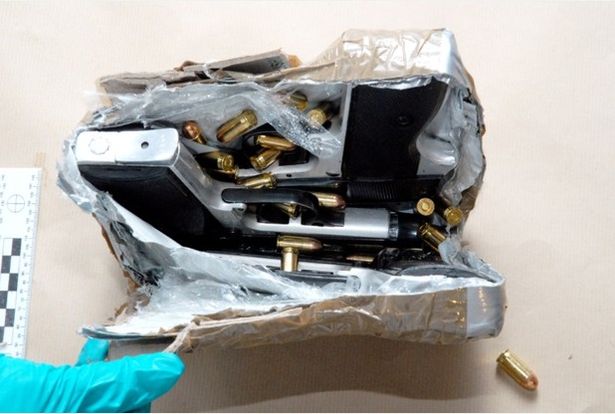 Police intercepted a consignment of guns and ammunition as it was delivered to a crime gang in Leicester.

On Monday, five men from Luton were found guilty of bringing the weapons into the UK and supplying them to Leicester criminals.

The three Hungarian FEG semi-automatic handguns and 21 rounds of ammunition were seized by police last year.

The seizure followed a joint surveillance operation by officers from the East Midlands Special Operations Unit and its counterparts in the East of England.

They said he had been responsible for sourcing the weaponry in the Netherlands before using other members of the group to provide security and storage as well as collecting money and delivering the weapons to other criminal groups.

The investigation was supported by Dutch Police and the National Crime Agency.

Two members of the Luton group were stopped at the border with the UK in Coquelles, France in May 2016.

They were arrested after firearms were found hidden behind the dashboard of the hired Ford Mondeo estate they were travelling in.

During the trial, evidence was heard that the group had used more than 60 mobile phone numbers in a four month period, 18 of which were attributed to Muzaffer Ali.

Detective Sergeant James Panter, who led the investigation for the Eastern Region Special Operations Unit, said: “This was a complex and lengthy investigation which has involved numerous defendants and items of evidence.

“By working jointly with our neighbouring regional crime units as well as overseas law enforcement partners we have managed to bring to justice those responsible for bringing the scourge of firearms criminality into the UK.

“The profits and consequences of gun crime have far-reaching effects in the community, not least to mention the potential loss of life which could have been caused had we not managed to intercept these overseas arms transfers.

“We are committed to stopping dangerous offenders and putting a stop to the illegal firearms trade.”

The five men, who are all from Luton, will be sentenced on a later date.

The trial at Luton Crown Court concluded on Monday.

• Haroon Khatab, 41, of Jasmine Road – was found guilty of conspiracy to import guns and ammunition.

• Faisal Mahmood, 20, of Maidenhall Road – Pleaded guilty during the trial of the transfer of firearms and ammunition.

Three other defendants were found not guilty of all charges.