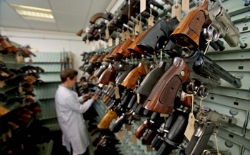 Police forces across the UK are appealing for people to hand over any unwanted guns with a two week surrender of firearms and ammunition, starting on Monday 13 November 2017.
It has been three years since the last national firearms surrender, when forces again asked members of the public to surrender unlawfully held or unwanted guns and ammunition to prevent them from getting into criminal hands.

Many firearms are held in innocence and ignorance of their illegality or are overlooked and forgotten in people's homes. Others are acquired and distributed by criminal networks to threaten or harm their local communities.

The surrender gives members of the public the chance to dispose of a firearm or ammunition by simply taking it to a local designated police station and handing it in.

National Police Chiefs' Council Lead for Criminal Use of Firearms, Assistant Chief Constable Helen McMillan, said: "I am urging anyone with an unwanted firearm to hand it over to police. You don't have to give your name or address; we just want
more guns out of harm's way.

Each firearm we retrieve has the potential to save a life so do the right thing and surrender your weapon."
The surrender initiative is being co-ordinated by the National Ballistics Intelligence Service (NABIS). The surrender will run for two weeks from Monday 13 November to Sunday 26 November 2017.

Detective Chief Superintendent Jo Chilton, Head of NABIS, added: "Surrendering unwanted or illegal firearms avoids the risk of them becoming involved in crime and means that members of the community can dispose of them in a safe place.
"Perhaps you have a gun that has been handed down through the family or you have found a firearm in your loft or shed which has been gathering dust and you had forgotten about.

During the campaign this November you can contact your local force and hand in any unwanted or illegal firearms. This way you can be confident you have got rid of a firearm safely."

During that period, those handing over firearms will not face prosecution for the illegal possession, at the point of surrender, and can remain anonymous.

Guns and ammunition can be surrendered at designated police stations across the UK but anyone handing in a firearm, ammunition or any other weapon during the surrender is advised to check the opening times of their station in advance by calling 101 or visiting their local force website.

Latest crime figures issued on 19 October 2017 by the Office for National Statistics (ONS) show that crime involving firearms in England & Wales has increased by 27% (to 6,696). This is for year ending June 2017 compared with the previous year (5,269 offences)
Illegal possession of a firearm can mean five years behind bars and if you are found guilty of possession with intent to supply that can lead to a life sentence.

During the last national firearms surrender in 2014 more than 6,000 items were handed in to police. These included hand guns, rifles, shotguns, antique (obsolete calibre) guns and imitation firearms - as well as ammunition.

David Jamieson is Police and Crime Commissioner for the West Midlands area and sits on the NABIS Governance Board. He said "In common with PCCs across the country I am pleased to be supporting the national firearms surrender.
"I would urge people to hand in their guns.

Any firearm in the wrong hands can have a devastating impact. It is no exaggeration to say that each gun we retrieve has the potential to save a life.
"If you or a family member possess an illegal or unwanted firearm please hand it in to the police. It might just be the best decision you ever make. Destroying these firearms will make us all safer."

NABIS and police forces across the UK are working with partners such as the Crown Prosecution Service (CPS) and the Local Government Association (LGA), to ensure the surrender fortnight of action is a success.

Councillor Simon Blackburn, Chair of the Safer and Stronger Communities Board at the Local Government Association,said: "Councils know their areas best and play a vital role in reducing crime, working alongside their community safety partnership partners to make their towns and cities safer and protect residents from harm.

"Gun crime can devastate lives and spread fear in communities. With latest annual figures showing gun crime has risen in the UK, councils - working with the police, local businesses and voluntary organisations - are determined to help rid these lethal weapons from our streets and fully support the national firearms surrender."

If you know of anyone involved with illegal firearms call police on 101 or independent charity Crimestoppers (anonymously) on 0800 555 111. If you are a licensed firearm holder who wants advice please contact your local force.

Firearms Officers Mental Health Home Office wellbeing AFO Assault on Police PTSD Police Scotland Armed Police PFEW West Mids Police Terror Threat College of Policing Welfare Support Programme WSP welfare Armed Police Numbers Protect The Protectors Metropolitan Police illegal firearms NPCC Taser PFOA Terror attack ARV
I have recently been medically retired from the police with PTSD following a serious injury on duty a few years ago. I would not be here if it was not for the PFOA - they literally saved my life. In February 2017 I was long-term sick off of work and I was in a very bad place. Whilst I have been unable to continue as a serving officer, I will forever be indebted to the PFOA. I will never be able to repay them for all that they did. All I can say is thank you so much from me and my family.
PFOA assisted by offering counselling/coaching support to officer’s family. A respite break was granted to allow the officer and his family to get away and spend some valuable time together as a family unit.
The PFOA purchased a new cross trainer and have loaned this to the officer to enable him to remain active and hopefully return to Ops.
PFOA arranges support for the officers involved prior to the Inquest and after by way of a respite breaks and NLP Coaching or Counselling.
I would like to personally thank the PFOA for the gifts we received for our daughter. The timing could not have been better. the week the gifts arrived, she had lost her hair and was due to go back to hospital for her next round of chemotherapy treatment which she was not looking forward to. Opening the parcel put a big smile back on her face for two reasons. firstly, because you had chosen as gifts exactly what she would have chosen for herself. But secondly and more importantly, because she realised other people ere also thinking of her and willing her to get better. People she had never met.
Thank you so much for the shopping vouchers, they will come in very handy. Thank you for helping my daddy to be himself again. Keep helping police officers because some people don’t understand how hard it can be and they are doing a great thing.
This act of kindness was greatly appreciated by us both at what is a very difficult time for our family.
© 2017 PFOA - Police Firearms Officers Association
Head Office: Chatteris Police Station, 18 East Park Street, Chatteris,
Cambridgeshire PE16 6LD - Tel: 01354 697 890
Email: [email protected]