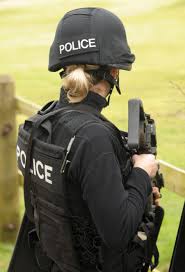 Police Scotland is facing a sexism row after an inspector said female firearms officers should not be deployed together if men were available.

In an internal email, obtained by BBC Scotland, the officer acknowledged he may be accused of being sexist.

But while stating the need for a gender balance for searches he also highlights "physical capacity" and the "balance of testosterone perspective".

Police Scotland said the wording of the email was "unacceptable".

The email has also been criticised by a former deputy chief constable as well as Justice Secretary Humza Yousaf.

At the time new Chief Constable Iain Livingstone said any suggestion of a deep-rooted problem was "unfair".

The force currently has 572 Authorised Firearms Officers (AFOs). The vast majority, 539, are male while only 33 (6%) are female.

The email was sent in January by a then temporary inspector, based in the east of the country.

It read: "Im (sic) going to plunge in with both feet and open myself up to being accused of being sexist!

"For operational reasons I don't want to see 2 x female officers deployed together when there are sufficient male staff on duty.

"This is based on my experience in the firearms and routine policing environment, other than the obvious differencies (sic) in physical capacity, it makes more sense from a search, balance of testosterone perspective.

"If you want to discuss my door is open."

It concludes: "Ladies, For the purpose of transparency I have included you in this email.

"Likewise if you want to discuss my door is always open."

Former Tayside Deputy Chief Constable Angela Wilson, one of the officers who openly criticised the force in August, said the email highlighted a serious problem.

Ms Wilson said: "To be quite frankly honest with you it is outrageous, it is disappointing and really you shouldn't see emails like that in this day and age.

"Female officers are trained exactly the same as their male counterparts in firearms so are totally, equally capable of dealing with an incident so it is irrelevant what the crew is made up of."

Ms Wilson said firearms officers go through the same rigorous physical and mental training regardless of their gender.

But she said she was not taken aback by the contents of the email.

She added: "Sadly it doesn't surprise me as I know there are still pockets of people with these types of attitudes.

"I think Police Scotland should be doing more to root out people with these attitudes because it tends to lie at the middle supervisory ranks, not necessarily at the top of the organisation and not necessarily officers coming in at the lower ranks. It's in the middle."

He said: "That is not the kind of language I would expect any police officer, junior or senior in rank, to be using but it will be for the chief constable, undoubtedly, to investigate and we will leave that in his hands.

"He will be of the same opinion as me, I am sure, that that language is just utterly unacceptable."

Jillian Merchant, a solicitor with Thompsons, said: "I think the first thing that comes to mind is that it might be an act of sex discrimination.

Police Scotland told the BBC the Code of Practice for Stop and Search states officers cannot search people of the opposite sex.

But Ms Merchant speculated as to how that could be applied as only a small percentage of firearms officers are women.

Ch Supt Matt Richards, divisional commander for specialist services, said: "The email was dealt with immediately and the matter was investigated fully.

"The officer fully accepts the wording was unacceptable and does not meet our values of fairness, integrity and respect.

"He was spoken to by senior management and issued with corrective advice.

"The officer has apologised and the matter was dealt with internally."

illegal firearms Terror attack wellbeing Metropolitan Police Mental Health Home Office Firearms Officers Terror Threat PTSD Armed Police Assault on Police AFO Armed Police Numbers PFOA WSP West Mids Police Police Scotland Taser NPCC ARV Welfare Support Programme Protect The Protectors PFEW welfare College of Policing
I have recently been medically retired from the police with PTSD following a serious injury on duty a few years ago. I would not be here if it was not for the PFOA - they literally saved my life. In February 2017 I was long-term sick off of work and I was in a very bad place. Whilst I have been unable to continue as a serving officer, I will forever be indebted to the PFOA. I will never be able to repay them for all that they did. All I can say is thank you so much from me and my family.
PFOA assisted by offering counselling/coaching support to officer’s family. A respite break was granted to allow the officer and his family to get away and spend some valuable time together as a family unit.
The PFOA purchased a new cross trainer and have loaned this to the officer to enable him to remain active and hopefully return to Ops.
PFOA arranges support for the officers involved prior to the Inquest and after by way of a respite breaks and NLP Coaching or Counselling.
I would like to personally thank the PFOA for the gifts we received for our daughter. The timing could not have been better. the week the gifts arrived, she had lost her hair and was due to go back to hospital for her next round of chemotherapy treatment which she was not looking forward to. Opening the parcel put a big smile back on her face for two reasons. firstly, because you had chosen as gifts exactly what she would have chosen for herself. But secondly and more importantly, because she realised other people ere also thinking of her and willing her to get better. People she had never met.
Thank you so much for the shopping vouchers, they will come in very handy. Thank you for helping my daddy to be himself again. Keep helping police officers because some people don’t understand how hard it can be and they are doing a great thing.
This act of kindness was greatly appreciated by us both at what is a very difficult time for our family.
© 2017 PFOA - Police Firearms Officers Association
Head Office: Chatteris Police Station, 18 East Park Street, Chatteris,
Cambridgeshire PE16 6LD - Tel: 01354 697 890
Email: info@pfoa.co.uk