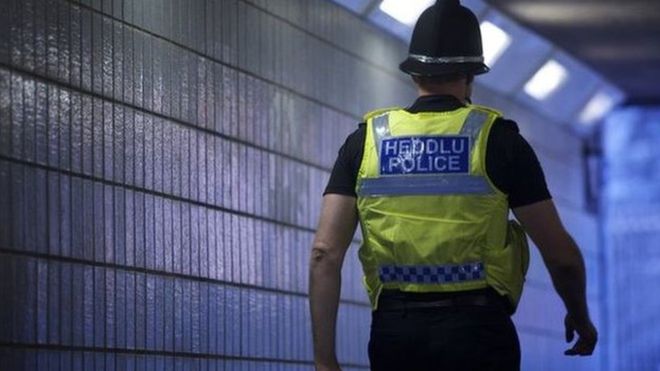 The number of police officers in Wales signed off work due to stress has more than doubled over the past four years, according to new figures.

A Freedom of Information request showed 86 officers across the four Welsh police forces were too ill to work in June due to mental health issues.

South Wales Police, the force with the most officers, had the highest number - 60 - off work due to stress in June.

North Wales and Dyfed-Powys Police both had eight officers signed off, while Gwent had 10.

The Police Federation described the figures as "the tip of the iceberg".

Vice-chairman Calum Macleod said: "This is because of the stigma attached, because they don't want to let their colleagues and the public down as well as concerns it might hamper their career prospects."

He said a cut of 20,000 officers in England and Wales since 2009 increased the pressure on those on the front line.
"You are having officers' rest days cancelled without being given appropriate notice - so they are spending less time with families," he added.
In April, mental health charity Mind Cymru launched its Blue Light Programme, offering support and training to emergency workers dealing with stress but Mr Macleod believes this should be done by employers, not charities.

South Wales Police Assistant Chief Constable Richard Lewis said the force gave officers "all the support" it could, adding: "We are continuing to work hard to ensure we create a workplace where it's okay to talk about mental health."

Gwent Police said it had a confidential service for all employees, available "seven days a week, 365 days a year", which included counselling.

North Wales Police welcomed its reduction in officers signed off, putting it down to "colleagues working together to support police officers" and counselling services.

Dyfed-Powys Police did not respond to a request for comment.

The Home Office said it recognised the "uniquely-challenging" work officers did and demands placed on them, saying Home Secretary Amber Rudd had announced £7.5m for a new National Police Welfare Service to complement support provided by individual forces.