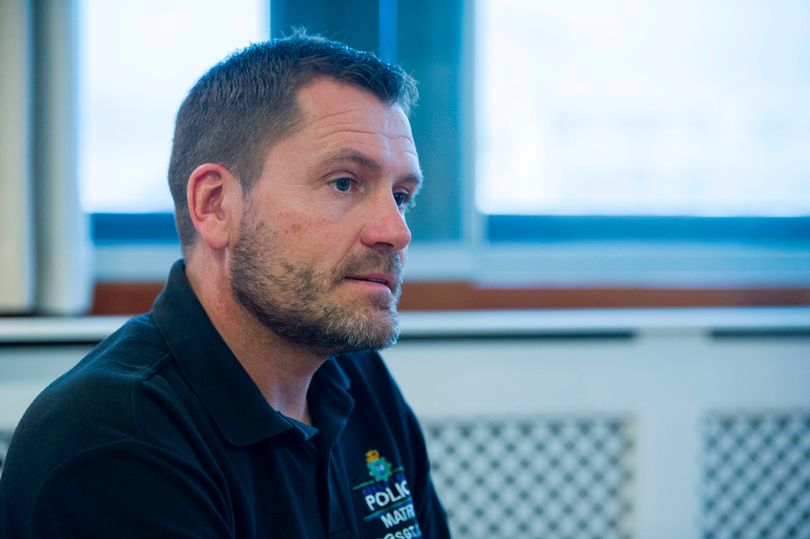 Sergeant Jim Morgan is back at work following an inspirational recovery after he was run over by Martin Stowell, who was later found not guilty of any wrongdoing

A police officer who suffered horrific injuries after being run over while on duty has spoken out about his ordeal and the inspirational recovery that has seen him return to work.

Sergeant Jim Morgan feared his left leg would need to be amputated after Martin Stowell drove over it with a stolen van  in Norris Green.

He has now been hailed a hero by Merseyside Police’s top police officer after defying the expectations of doctors to return to duty less than a year after the incident.

Speaking to the Echo after being handed a special award by Chief Constable Andy Cooke, Sgt Morgan relived the moment he felt his body crumple beneath the front wheel of the Ford Transit.

And he also revealed his thoughts on the trial that led to Stowell being cleared of any offence  in the November 25 incident.

Stowell, from Everton, was sitting in the driver’s seat of the van on Hasfield Road when Sgt Morgan and his colleagues approached it.

The then 35-year-old told jurors he did not know the vehicle was stolen and was scared the officers were part of a gang he had been told were attacking people in the area.

A court heard the officers were wearing uniform and had been parked in front of him in a bright yellow MATRIX van.

“I was out and in the front of the driver’s side of this white van that was parked up and everything snowballed so fast from there.

“This was beyond my control. Once you are in there and trying to make an arrest and he is in this powerful engine - if you are getting assaulted you get a physical force - but this was a mechanical energy and there is no way you can fight against it.

“I just felt myself slipping under the wheel.

“It just caught my leg and from there I had this self-preservation - realising the manner of his driving prior to going under I just thought ‘what’s going to happen next?’

“My adrenaline must have been through the roof and I rolled to the other side of the pavement and thought I was safe.”

From there, the 46-year-old remembers feeling pain, the rain falling on him and umbrellas being held over him as people in the area - who he said were generally very supportive of him - came to help.

The dad-of-two was taken to Aintree hospital where doctors found that, as well having horrific injuries to his left leg, he had a collapsed lung and 15 rib fractures.

Recalling those first days in hospital, he said: “I went into surgery and they said there was a chance I would lose a leg.

“In my own mind there are so many positive role models out there, from the Invictus Games to the Paralympics, I had settled for going into surgery and coming out with a leg amputated at some point and I thought I could live with that.”

His injuries were not so severe that amputation was required and, after his initial treatment, he began the long road to recovery - supported by staff at Aintree, his family and his colleagues, all of whom he wished to thank for their support.

Describing his path back to work, he said the main difficulties were psychological.

He said: “The battle was where you are going to go with yourself afterwards - whether you see yourself going back to what you used to do, or going into other channels, or whether you can see yourself even being in the police.

“It was very difficult to walk back into a police station.

“I had sort of lost a bit of faith in society - that was the court case as much as anything.”

That court case concluded in May when Stowell, who has a history of stealing vehicles, armed robbery and driving dangerous, was found not guilty of causing GBH to Sgt Morgan with intent to resist arrest; causing serious injury by dangerous driving; aggravated vehicle taking; handling stolen goods and dangerous driving.

The verdict came as a shock to Sgt Morgan, who was surprised the case even went to trial.

He said: “All of a sudden a jury is being sworn in and you think ‘this is going ahead'. I was a little bit gobsmacked at that - not so much taking me through court but all of the other people who had experienced it.

“You hear third party stories about how it had affected other people who worked with me.

“You only have to see the footballers who have the double leg fractures on the football pitch and everyone turns away in disgust and some throw up. They had seen it at much closer quarters and they weren’t able to turn away, they had to deal with what was front in front of them.

“They had to be positive in arresting the fella, looking after me or preserving the scene."

“I was very annoyed that he was dragging everyone through court and then obviously the court case went through.

“So to come back after an hour and a half for a not guilty, I was gobsmacked.

“You want to put a strong front on things but it is what it is.

“I was disappointed by it [the verdict].

“I felt it was an out of body experience. I just felt like ‘no, let’s do the real one now’.

“It was quite weird then to go home to explain it to your family and friends.”

Since the case Sgt Morgan has returned to the scene of the incident in a bid to come to terms with what happened.

When he started with Merseyside Police 25 years ago Norris Green was his first beat and he has always viewed the area with affection as a result.

In September he returned to work and, despite the psychological blow of the court case, he said the support he had received had countered his initial loss of faith in society.

He said: “I know that intelligence comes in from communities and it’s fabulous and I think it was even coming in that night, resulting in a number of warrants.

“People, good people, are out there and they do want to help. As a police officer you can get bogged down. You are not always dealing with the best people, you are dealing with the bad people. Then you come to with the nice people who will point you in the right direction.”

Welfare Support Programme West Mids Police illegal firearms AFO ARV Police Scotland PTSD PFEW PFOA Taser Terror attack Mental Health Armed Police Armed Police Numbers Metropolitan Police College of Policing welfare Home Office Protect The Protectors wellbeing Firearms Officers NPCC Terror Threat Assault on Police WSP
I have recently been medically retired from the police with PTSD following a serious injury on duty a few years ago. I would not be here if it was not for the PFOA - they literally saved my life. In February 2017 I was long-term sick off of work and I was in a very bad place. Whilst I have been unable to continue as a serving officer, I will forever be indebted to the PFOA. I will never be able to repay them for all that they did. All I can say is thank you so much from me and my family.
PFOA assisted by offering counselling/coaching support to officer’s family. A respite break was granted to allow the officer and his family to get away and spend some valuable time together as a family unit.
The PFOA purchased a new cross trainer and have loaned this to the officer to enable him to remain active and hopefully return to Ops.
PFOA arranges support for the officers involved prior to the Inquest and after by way of a respite breaks and NLP Coaching or Counselling.
I would like to personally thank the PFOA for the gifts we received for our daughter. The timing could not have been better. the week the gifts arrived, she had lost her hair and was due to go back to hospital for her next round of chemotherapy treatment which she was not looking forward to. Opening the parcel put a big smile back on her face for two reasons. firstly, because you had chosen as gifts exactly what she would have chosen for herself. But secondly and more importantly, because she realised other people ere also thinking of her and willing her to get better. People she had never met.
Thank you so much for the shopping vouchers, they will come in very handy. Thank you for helping my daddy to be himself again. Keep helping police officers because some people don’t understand how hard it can be and they are doing a great thing.
This act of kindness was greatly appreciated by us both at what is a very difficult time for our family.
© 2017 PFOA - Police Firearms Officers Association
Head Office: Chatteris Police Station, 18 East Park Street, Chatteris,
Cambridgeshire PE16 6LD - Tel: 01354 697 890
Email: info@pfoa.co.uk