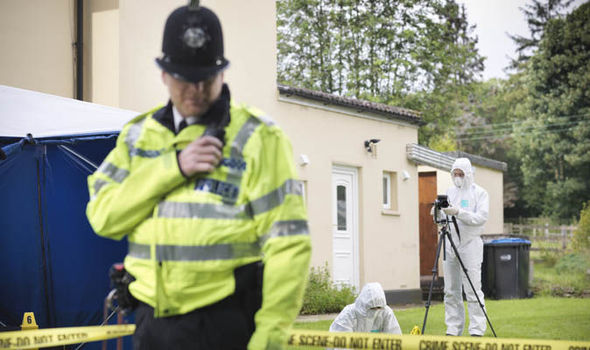 Che Donald, the Federation’s lead on Police Officer Mental Health, said: 'There is a systematic failure of care to these officers'.

The number of police officers taking time off work for mental health-related illnesses is rising at an alarming rate - up 47 per cent in the last five years in fact.

According to a survey of all forces in the United Kingdom, there has been a seven per cent increase in the number of police officers experiencing stress, anxiety, depression or other psychological illnesses in the last financial year. A total of 9,267 police officers have taken time off with mental ill health, representing an increase of 635 officers from the figures provided the previous year, according to a Freedom of Information Act request of all forces .

This represents roughly one in 15 officers in the forces that responded to the survey for 2016/17. The largest number was in London, where 971 police constables from the Met took time off sick for mental health illnesses, along with 137 sergeants and 41 inspectors/above – a total of 1,149.

At Police Scotland meanwhile, 642 police officers went off sick; 594 constables, 38 sergeants and ten inspectors/above. Other forces with high numbers of officers taking time off work over the past year for stress, anxiety, depression or other psychological illnesses include West Midlands Police (711 officers) and Greater Manchester Police (590 officers). One figure that stands out – given the size of the workforce – are the numbers for Northamptonshire Police, where 387 officers took time off for mental health related illness over the past year.

A total of 41 forces responded - every constabulary in the UK apart from Durham, Dyfed Powys, Leicestershire and Sussex. And Derbyshire did not provide officer numbers, but stated that 4,735 working days were lost to psychological disorders, which amounted to a total of 6,861 police officer days.

The overriding theme seems to be that police officers are falling ill due to the stresses and strains of their jobs. And concerningly, when Police Oracle first ran this survey for the financial year 2012/13, 6,294 UK police officers were signed off work with psychological illnesses – with the number now at 9,267, that is an increase of 47 per cent in past five years.

Earlier this year Police Oracle launched its BluePrint campaign which calls on the government to meet its obligation of protecting our officers both in the job and when they have been forced out of the service because of physical injuries or mental trauma. In March we revealed 60 per cent of police officers believed their workload is too high. The Police Federation of England and Wales has described the latest figures “perfect storm” comprising single crewing, remote supervision, increased demand and reduced capacity.

Che Donald, the Federation’s lead on Lead on Police Officer Mental Health says: “The fact that more police officers are falling ill is no surprise at all. We have seen a significant decrease in officer numbers while demand remains the same. Officers everywhere are feeling under pressure.” Mr Donald described an environment of presenteeism, whereby officers are afraid to take time off sick, are coming into work when they shouldn’t and using their annual leave to recover from ill health. He said: “All this does is compound the issue.

They are not being looked after and they are not looking after themselves. There is still this feeling that if they go off sick they will be putting additional pressure on their colleagues because the front line is so thin. It is taking its toll on officers one at a time and it is causing long term sickness.

” Nottinghamshire Police recorded that ten police officers fell ill with psychological disorders as a result of injury on duty - of these seven were constables, two were sergeants and one was a detective constable. Hampshire Police recorded that three PCs were forced off with work-related stress - as opposed to other forms of stress or depression. This was also an issue at Avon and Somerset Police, where 171 police officers reported they had to take time off for stress, compared to 54 for anxiety, 52 for depression and 14 for other conditions listed as “alcohol or drug dependency, insomnia, shock and mental illness”.

South Yorkshire Police stipulated that 46 officers took time off with work-related stress; that is outside the 173 police officers going absent through stress, depression, and post traumatic stress disorder. And stress significantly outweighs other disorders at Merseyside Police; 112 police officers have reported debilitating levels of stress, compared with 36 dealing with anxiety, 33 struggling with depression and 3 facing post traumatic stress disorder. Mr Donald added: “So many officers are single crewed, so if they do want to speak to someone, when does that opportunity arrive? They are spending eight hours alone in the car every day.

This doesn't lend itself to adequate supervision. There is a systematic failure of care to these officers. If these factors are not addressed the mental health of officers is just going to deteriorate ever further. “The candle is burning at both ends. We can only push police officers so far before they break and we are at that critical point right now. We cannot continue to keep public safe if we cannot keep our own officers safe.” So what can be done about the escalating mental health illness in policing?

Sussex Police Chief Constable Giles York is National Workforce Lead for the National Police Chief’s Council – ironically his force did not reply to the FOI request. CC York said: “I tell my everyone in my organisation: ‘I will ask you to do dangerous and difficult things and in return I will make sure I will look after you’. Whether that is in the form of a tax-free bicycle to cycle to work on, to five per cent off the cost of an Apple iPhone, or whether we think you have been exposed to something traumatic and we offer immediate defuse sessions or professional counselling.

There is mindfulness training, grants available nationally, help from the Police Dependents Trust so that officers who are sectioned can receive private health care. There is a whole spectrum of things available - to keep officers healthy or to react when they are not.” CC York said the increase in officers reporting mental illness could reflect an atmosphere in which they are more readily able to talk. He added: “There is so much out there to help people but this is only good if someone has put their hands up said that they have a problem. We support the #TimeToTalk movement - held every year on the first Thursday in February and which aims to break the silence around mental health problems.

“A chief superintendent challenged me about working for the force while suffering from depression, so he and some colleagues met with the head of HR and set up new policies as a result. We now have 200 mental health first aiders in force who can act as a point of contact for people who are struggling and help them get the help they need.” And there is help available right now for officers wherever they are in the country in the form of the Police Federation’s Welfare Support Programme, the website oscarkilo.org.uk, which has a whole host of police-specific mental health resources, as well as in an app called Backup Buddy designed to help police officers normalise the traumatic events they have been through.Or the Mind Blue Light programme.

Patrick Cairns, Chief Executive of the Police Treatment Centres, also emphasises the need for police officers to talk about what they are experiencing. He said: “You need to discuss what you’re feeling and get those issues out in the open. For too long police officers have been reluctant to talk about their concerns because of a fear that they might be judged. However, you can’t get help until you talk about these things, and I know that people will be sympathetic and help you to get the treatment you need.”

Mr Cairns said much more than judgement or derision, police officers are more likely to receive understanding of a common ground with colleagues who are going through similar experiences. He added: “This may seem like a very big step, or a very small one. But either way it is beneficial to get these things out in the open if you are to recover.” Mr Cairns spoke of the PTC’s residential Psychological Wellbeing Programme.

The two-week stay enables officers to courses of stress management, relaxation and sleep workshops, mindfulness, group exercise sessions along with counselling and complementary therapy sessions. The programme is open on a self-referral basis and could be of special value to those in roles that carry a higher psychological risk, such as family liaison officers. If you think you could benefit from taking part, and you are from one of the 22 forces served by PTC, contact the centre for a questionnaire which you can fill out before you are assessed by a nurse.

More than 800 police officers have gone through the programme since its introduction in April last year, and Mr Cairns said it has literally saved lives - as well as careers and relationships. “I have had five officers in my office telling me the programme has been a lifesaver. And I am not exaggerating; one had already attempted suicide. It provides a great support network.”