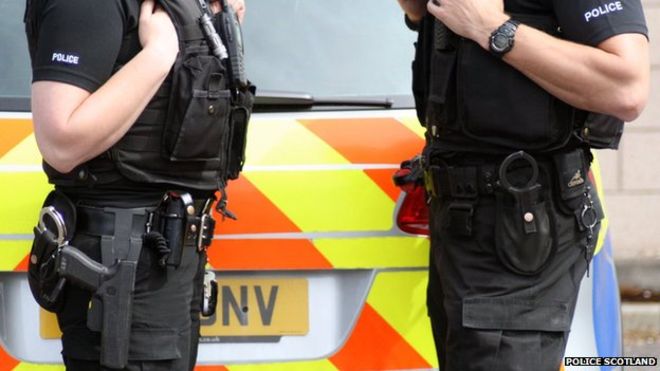 The National Police Chiefs’ Council (NPCC) will meet next month to discuss a range of ideas to combat a marauding terror attack, including arming patrol officers in key locations.

The idea is that officers who are not part of Britain’s firearms squads could react quickly to shoot a terrorist such as the Westminster or London Bridge attackers if they were first on the scene.

Yesterday West Midlands Chief Constable Dave Thompson called on the Government to ‘think very carefully’ about the need for ‘enhanced protection’ for officers who run towards terrorists.

But critics yesterday dismissed the notion of giving a sidearm to ordinary officers on the beat as ‘hysterical’.

They said the move would overturn Britain’s 188-year-old history of policing by consent and would position the UK closer to our continental neighbours whose police are routinely armed.

In a paper being drawn up by Deputy Chief Constable Simon Chesterman, the national police lead on firearms, a number of measures have been proposed for discussion to boost Britain’s armed response to terror attacks.

One idea is to give pistols to constables who routinely patrol sensitive locations and key landmarks considered at risk of a terror attack, such as Government buildings and major tourist attractions, so they could respond before firearms officers arrived.

Currently only highly trained firearms officers carry guns. They have to go through a rigorous selection process with a high failure rate.

They must pass several selection tests before completing a nine-week training course, and officers in counter-terrorism face additional training of at least three months.

The discussion paper suggests that beat officers who are currently unarmed would get only about two weeks of training in how to handle a handgun. They would then get a day of refresher training and reaccreditation twice a year.

The NPCC stressed that any decision regarding arming patrol officers would be subject to extensive assessments and approval by chief constables to ensure it was justified by the nature of the threat.

But no change in the law would be required for police chiefs to increase the number of officers who carry guns.

In the wake of PC Keith Palmer’s murder at Westminster in March, former Northern Ireland secretary Theresa Villiers suggested it was time for all police who patrol areas ‘known to be of interest to terrorists’ to be armed. The heroic officer, who was stabbed to death by terrorist Khalid Masood while guarding the Houses of Parliament, was not carrying a firearm.

Two armed close protection officers shot dead his attacker within a few seconds of the stabbing, ending Masood’s bloody rampage, which claimed five lives.But investigators have said that even if PC Palmer had been armed it is unlikely he would have been able to defend himself in time.

However, others point to the fact that in the 2013 terrorist murder of Fusilier Lee Rigby, in Woolwich, South London, police could not intervene until armed colleagues arrived on the scene.

There are also concerns about how some areas outside London would cope with a marauding terrorist attack.

Any move towards arming ordinary officers is likely to be unpopular with the rank and file.

Some 80 per cent of officers recently voted against carrying guns. Security expert Dai Davies, a former head of royalty protection at Scotland Yard, said: ‘I am appalled that anyone is thinking of putting lethal force into the hands of untrained officers who have not gone through the rigorous training and selection of firearms officers.

‘We have armed response units which should be deployed in sufficient numbers in high risk areas to protect the public. Someone needs to put a stop to this hysterical outcry for guns in the hands of all officers. The fact is it does not stop terrorism, what it can only do is contain the situation.

‘Arming officers across Britain will not prevent terrorism, if anything it could increase alienation. This is an over-reaction.’