Police Chief wants to arm all his officers with Tasers 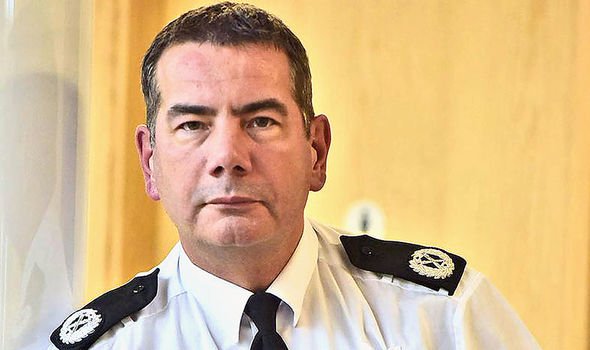 A CHIEF CONSTABLE is fighting back against violence in lawless Britain by arming all his officers with Taser stun guns.

Nick Adderley of Northampton Police, said “enough is enough” and pledged to tackle the scourge of violent assaults with the 50,000-volt weapons for frontline staff.

Mr Adderley’s force will become the first in Britain to issue Tasers as standard, in a move backed by his police and crime commissioner.

Speaking exclusively to the Daily Express last night, he said: “I can’t sit here and preside over a situation where my officers are exposed to increasing levels of violence when at my disposal is equipment that could save an officer’s life. Enough is enough. Mine will be the first force to issue a Taser to every officer who wants one.”

There is mounting concern tens of thousands of beat officers are ill-equipped to deal with the life-threatening danger posed by criminals operating with impunity on Britain’s Wild West streets.

In Northamptonshire, there has been a near 50 percent increase in attacks on police in two years.

But the deployment of Tasers is a matter for individual forces, meaning the majority of officers do not carry them because of the cost.

Experts want the Home Office to fund the purchase, training and use of the weapon to ensure there is blanket coverage to combat the violence officers face every day.

Police Federation of England and Wales national chairman John Apter said: “We should ensure every officer who wants to carry a Taser can do so. Officer safety should never come second to balancing the books.

“We can’t have police officers feeling vulnerable because they don’t have the equipment to protect and defend themselves – that’s morally incomprehensible.”

The call to arms comes after one of policing’s darkest weeks.

Newlywed PC Andrew Harper, 28, was dragged to his death on Thursday night while responding to a reported burglary in Berkshire.

PC Harper, with the Thames Valley force, was the first officer to die on duty since PC Keith Palmer was stabbed to death outside Parliament in March 2017.

A week earlier, Metropolitan Policeman PC Stuart Outten, 28, was stabbed in the head as he tried to stop a van in Leyton, east London.

He Tasered his assailant, despite his horrific injuries.

PC Gareth Phillips, 42, was left with a broken pelvis and head, abdominal and other internal injuries after he was run over with his own patrol car in Birmingham.

Mr Adderley said it would take 18 months to two years to train and equip all frontline officers, at an initial cost of £220,000.

Priority will be given to first response officers and neighbourhood units before the weapon is rolled out across the force.

Mr Adderley said: “It is my submission Taser will be standard issue equipment in three years, but I am not prepared to wait, so I have pressed the button now.

“I went to see the Police and Fire Crime Commissioner [Stephen Mold] yesterday and he was fully supportive.

“There are people out there who are prepared to seriously injure, or worse.

“We haven’t moved with the times and we have to move with the times to combat the threat we are facing daily from those who simply have no respect for law and order.

“I wouldn’t be doing my job if I sat here and didn’t take the steps necessary to give my officers equipment that could save their lives and the lives of the public we serve.”

However, in 85 per cent of cases, they were not discharged.

If an officer draws, aims and places a Taser red dot on the suspect, the weapon is “used”, but not discharged.

It is usually enough to quell the threat.

The most common reason for Taser use is personal protection and to make an arrest.

An officer’s ability to carry a Taser is determined by the amount of time they have been in the force.

They are required to have the support of their supervisor, endorsement at superintendent level and pass the training course.

The weapon was first introduced in 2004 on a trial basis before it was used by specially trained units.

Officers receive 18 hours of training over three days, the longest of anywhere in the world.

Tory MP David Davies, a former Special Constable who received Taser instruction, said: “All officers should be trained to use Taser and carry them if they wish.

“It is more effective in many situations than the asp [baton] and is less likely to cause injury to the subject.”

“The point of the Taser is to keep somebody at bay. In the vast majority of cases, it is not deployed.”

There were a further 20,578 assaults that did not cause injuries.

NPCC Welfare Support Programme PFEW Home Office PFOA wellbeing Terror attack PTSD Terror Threat Armed Police Numbers Metropolitan Police West Mids Police College of Policing Firearms Officers AFO welfare illegal firearms Armed Police WSP Protect The Protectors Assault on Police Mental Health Taser ARV Police Scotland
I have recently been medically retired from the police with PTSD following a serious injury on duty a few years ago. I would not be here if it was not for the PFOA - they literally saved my life. In February 2017 I was long-term sick off of work and I was in a very bad place. Whilst I have been unable to continue as a serving officer, I will forever be indebted to the PFOA. I will never be able to repay them for all that they did. All I can say is thank you so much from me and my family.
PFOA assisted by offering counselling/coaching support to officer’s family. A respite break was granted to allow the officer and his family to get away and spend some valuable time together as a family unit.
The PFOA purchased a new cross trainer and have loaned this to the officer to enable him to remain active and hopefully return to Ops.
PFOA arranges support for the officers involved prior to the Inquest and after by way of a respite breaks and NLP Coaching or Counselling.
I would like to personally thank the PFOA for the gifts we received for our daughter. The timing could not have been better. the week the gifts arrived, she had lost her hair and was due to go back to hospital for her next round of chemotherapy treatment which she was not looking forward to. Opening the parcel put a big smile back on her face for two reasons. firstly, because you had chosen as gifts exactly what she would have chosen for herself. But secondly and more importantly, because she realised other people ere also thinking of her and willing her to get better. People she had never met.
Thank you so much for the shopping vouchers, they will come in very handy. Thank you for helping my daddy to be himself again. Keep helping police officers because some people don’t understand how hard it can be and they are doing a great thing.
This act of kindness was greatly appreciated by us both at what is a very difficult time for our family.
© 2017 PFOA - Police Firearms Officers Association
Head Office: Chatteris Police Station, 18 East Park Street, Chatteris,
Cambridgeshire PE16 6LD - Tel: 01354 697 890
Email: info@pfoa.co.uk