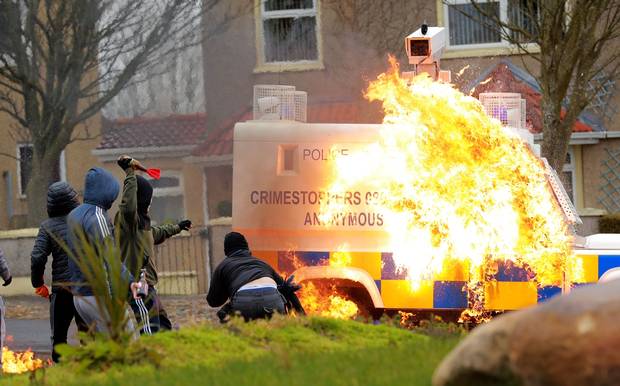 Police have been pelted with petrol bombs and projectiles at an illegal dissident republican march in Londonderry.

The Derry 1916 Commemoration Committee began their march through the Creggan estate to the city’s cemetery at 2pm on Easter Monday.

The parade was not listed with the Parades Commission. Ahead of the march police landrovers in the Creggan area were pelted with petrol bombs and bottles as hundreds gathered for the parade.

Police were again attacked as the parade entered Derry City Cemetery. There are not thought to have been any injuries.

Sporadic trouble continued for around two hours on Monday.

Police have confirmed around seven petrol bombs were thrown at police as well as items of masonry.

There was some damage to police vehicles but there are no reports of any injuries and no arrests have made at this time.

Chief Inspector Ivor Morton said: “In relation to today’s event in Derry/Londonderry we attempted to engage with the organisers of the parade over a period of time in a bid to facilitate their event within the law.

"The organisers declined to enter into any discussions with police on this matter.

"The organisers also stated in the run-up to today’s event they were informed by police the parade would be stopped and would not be allowed to go ahead.

"This was patently untrue and can only be viewed as an attempt by those behind the parade as a bid to raise tensions in the area.

"It is, therefore, regrettable that in raising those tensions a small number of people saw fit to attack police officers with petrol bombs in what was clearly a premeditated attack.

"I want to be clear that for anyone who engaged in actions that were unlawful or detrimental to community safety, there will be consequences through the criminal justice system.

"Police will review all video footage collected today and will robustly pursue all possible enquiries to identify those involved and bring them before the courts."

DUP Foyle MLA Gary Middleton has called on the PSNI to investigate the parade.

"This was an unregistered parade and today the scenes coming from the Creggan area have been totally disgraceful," he said.

"People in paramilitary style uniform is wrong and the continued glorification of terrorism is abhorrent.

"Nobody has a desire to see the violence on display today, except for barbaric thugs intent on endangering life and property. The PSNI were there to protect the community - people who live in fear at displays and parades such as this one today.

"The Police have to be praised for the work they continue to do this weekend, as they uphold the law and thoroughly deal with illegal parades and displays of such a disturbing nature.

"Among those that were involved in hurling petrol bombs were young people.

"I hope the actions of all involved are investigated and those responsible feel the full weight of the law. The over-riding desire of many is to see events pass off peacefully and without any paramilitary trappings, unfortunately a minority in our communities are intent on creating destruction and fear.

"Again the demands of respect and equality from republicans ring hallow when there is little shown to those who uphold the law and work to keep communities safe. Those involved should not believe they are above the law."

welfare Welfare Support Programme Armed Police Numbers ARV AFO illegal firearms West Mids Police Firearms Officers Home Office WSP College of Policing Police Scotland wellbeing PFOA Armed Police Protect The Protectors PTSD Terror attack PSNI PFEW Metropolitan Police Terror Threat Mental Health Taser Assault on Police
I have recently been medically retired from the police with PTSD following a serious injury on duty a few years ago. I would not be here if it was not for the PFOA - they literally saved my life. In February 2017 I was long-term sick off of work and I was in a very bad place. Whilst I have been unable to continue as a serving officer, I will forever be indebted to the PFOA. I will never be able to repay them for all that they did. All I can say is thank you so much from me and my family.
PFOA assisted by offering counselling/coaching support to officer’s family. A respite break was granted to allow the officer and his family to get away and spend some valuable time together as a family unit.
The PFOA purchased a new cross trainer and have loaned this to the officer to enable him to remain active and hopefully return to Ops.
PFOA arranges support for the officers involved prior to the Inquest and after by way of a respite breaks and NLP Coaching or Counselling.
I would like to personally thank the PFOA for the gifts we received for our daughter. The timing could not have been better. the week the gifts arrived, she had lost her hair and was due to go back to hospital for her next round of chemotherapy treatment which she was not looking forward to. Opening the parcel put a big smile back on her face for two reasons. firstly, because you had chosen as gifts exactly what she would have chosen for herself. But secondly and more importantly, because she realised other people ere also thinking of her and willing her to get better. People she had never met.
Thank you so much for the shopping vouchers, they will come in very handy. Thank you for helping my daddy to be himself again. Keep helping police officers because some people don’t understand how hard it can be and they are doing a great thing.
This act of kindness was greatly appreciated by us both at what is a very difficult time for our family.
© 2017 PFOA - Police Firearms Officers Association
Head Office: Chatteris Police Station, 18 East Park Street, Chatteris,
Cambridgeshire PE16 6LD - Tel: 01354 697 890
Email: info@pfoa.co.uk