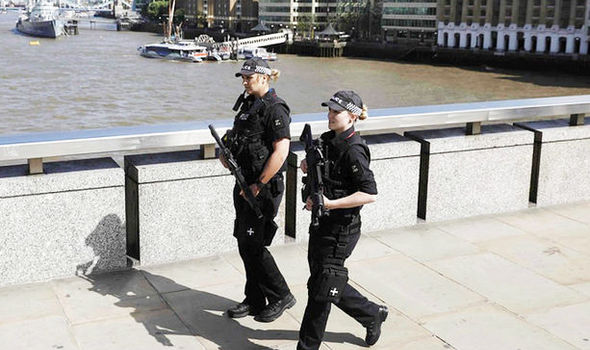 A year on from the murder of eight people, the UK's senior counter terror policing co-ordinator says the threat remains high.

Britain's resolve against terror has "never been stronger", the prime minister has said, as she remembered the victims and paid tribute to those who intervened during the London Bridge attack a year ago today.

Theresa May said the nationalities of the eight victims - from the UK, Canada, France, Australia and Spain - was "a reflection of our great cosmopolitan capital... and a tragic reminder that the threat from terrorism transcends borders".

She also praised "the bravery of our emergency services and those who intervened or came to the aid of others".

"The many stories of courage demonstrated that night will always stay with me," the PM said.

"Such as Ignacio Echeverria, who died after confronting the terrorists with the only thing he had, his skateboard, and Geoff Ho, who spent almost two weeks in hospital after being stabbed in the neck as he shielded his friends."

"My message to those who seek to target our way of life or try to divide us is clear - our resolve to stand firm and overcome this threat together has never been stronger," added Mrs May.

Some of those who worked on the London Bridge investigation will join other members of the emergency services, politicians, survivors and bereaved relatives for a memorial service at Southwark Cathedral today.

In a show of unity, the slogan #LondonUnited will also be projected on to the bridge throughout Sunday and there will be a minute's silence.

A year after the three attackers drove a van into pedestrians and then went on a knife rampage, a senior counter-terror officer told Sky News there is still a "very significant security threat" to the country.

Over the past year, police and the security services have been disrupting terrorist plots at a rate of roughly one every month.

Mr Haydon said although it was eight months since Parsons Green, the last attack that got through, the tempo of counter-terrorism investigations remained very high.

"The current threat level here in the UK is still at severe, that's where it's been since 2014," he said.

"It has gone to critical on two occasions, on the back of the Manchester and Parsons Green attacks, but we're currently at severe, which means an attack is highly likely."

Senior police and government officials have said counter-terrorism detectives and the security services are continuing to face an "unprecedented" level of investigations.

Mr Haydon said: "I'd encourage all members of the public to remain vigilant. The police and security services are working extremely hard, foiling and disrupting terrorist attacks all the time."

Across the capital and in other main centres of population, there has been a noticeable increase in security of late.

Hundreds of extra armed police officers have been recruited and trained to help improve response times to critical incidents.

At London Bridge, armed police managed to confront and shoot dead the three terrorists within eight minutes of the start of their attack.

Margaret Gilmore, a senior national security analyst, told Sky News that despite the large scale dismantling of Islamic State (IS or ISIS) in Syria and Iraq, the terror group still posed a significant threat and its surviving members continued to encourage supporters to launch attacks on the West, like the recent murder of two police officers and a member of the public in the Belgian city of Liege.

"These attacks really show that even though ISIS is now taking big hits in Iraq and Syria, they are still a threat back here," she said.

"That is because they are frantic to still be the terrorist group that any young person who wants to join will go to."

Ms Gilmore said that IS was desperate to direct or inspire more attacks in order to remain relevant and was using the internet to reach out to extremists here.

"They don't need territory, but they do need leaders and they need places to hide," she said. "The problem is that they are regrouping in other places where there is an element of lawlessness, places like Libya and the Philippines.

"Even though they've dispersed, they are still very adept at using the internet to continue trying to influence and radicalise others."

She added that even though authorities are stopping terrorist plots against the UK at a rate of one a month, officials know it is probably only a matter a time before another attack gets through.

As part of Sunday's London Bridge commemoration, candles will be lit by relatives of the victims during the Southwark Cathedral ceremony, before an olive tree - known as the Tree of Healing - is planted in the cathedral grounds using compost from floral tributes left on the bridge in the aftermath of the murders last year.

A procession from the cathedral to Southwark Needle, at the corner of London Bridge and Duke Street Hill, will take place following the ceremony, and a minute's silence will be held at 4.30pm.

Mayor of London Sadiq Khan said the city would honour the victims of terror attacks "through our actions and standing united against terrorism and in hope for the future".

Armed Police Numbers PSNI Assault on Police Police Scotland PFEW Metropolitan Police Welfare Support Programme IPCC Taser welfare PFOA West Mids Police Terror Threat AFO WSP wellbeing Home Office Protect The Protectors ARV Armed Police Mental Health PTSD Firearms Officers Terror attack illegal firearms
I have recently been medically retired from the police with PTSD following a serious injury on duty a few years ago. I would not be here if it was not for the PFOA - they literally saved my life. In February 2017 I was long-term sick off of work and I was in a very bad place. Whilst I have been unable to continue as a serving officer, I will forever be indebted to the PFOA. I will never be able to repay them for all that they did. All I can say is thank you so much from me and my family.
PFOA assisted by offering counselling/coaching support to officer’s family. A respite break was granted to allow the officer and his family to get away and spend some valuable time together as a family unit.
The PFOA purchased a new cross trainer and have loaned this to the officer to enable him to remain active and hopefully return to Ops.
PFOA arranges support for the officers involved prior to the Inquest and after by way of a respite breaks and NLP Coaching or Counselling.
I would like to personally thank the PFOA for the gifts we received for our daughter. The timing could not have been better. the week the gifts arrived, she had lost her hair and was due to go back to hospital for her next round of chemotherapy treatment which she was not looking forward to. Opening the parcel put a big smile back on her face for two reasons. firstly, because you had chosen as gifts exactly what she would have chosen for herself. But secondly and more importantly, because she realised other people ere also thinking of her and willing her to get better. People she had never met.
Thank you so much for the shopping vouchers, they will come in very handy. Thank you for helping my daddy to be himself again. Keep helping police officers because some people don’t understand how hard it can be and they are doing a great thing.
This act of kindness was greatly appreciated by us both at what is a very difficult time for our family.
© 2017 PFOA - Police Firearms Officers Association
Head Office: Chatteris Police Station, 18 East Park Street, Chatteris,
Cambridgeshire PE16 6LD - Tel: 01354 697 890
Email: [email protected]