PC 'blighted by unexpected deaths' died after falling from Viaduct 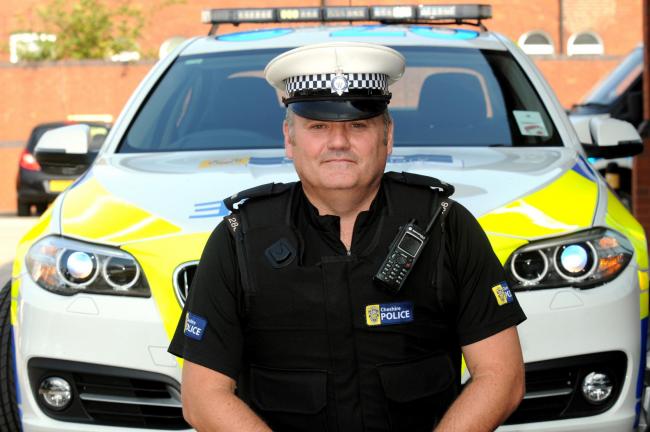 A POLICE officer struggled with stresses at work and a number of family deaths before he died, an inquest has heard.

Richard Hooley served as a family liaison officer and in the road traffic collisions unit for Cheshire Police.

Warrington Coroner's Court heard that on Tuesday, September 26 last year he drove to the Thelwall Viaduct and ended his life.

Coroner Alan Moore, 50, said Mr Hooley had been ‘blighted by unexpected deaths in his family’ and that grief ‘characterised his attitude to life’.

Eye witnesses who were driving along the M6 at the time gave statements to the court today, Wednesday.

She said: “I saw a white car pull over to the side of the road and a man got out.

“It was a matter of seconds between him leaving the car and jumping from the bridge, I didn’t even get time to roll down my window and shout out to him.”

CCTV confirmed the short amount of time between Hooley leaving his car and jumping.

Mr Hooley’s body was found a short time later by PC Brian Pritchard and paramedics confirmed his death at 9.51am.

Detective Inspector Hannah Friend was also on duty and attended the scene.

In a statement she said she was ‘saddened’ to be able to identify the man as her colleague PC Richard Hooley.

No note was found in the vehicle or at his home.

A forensic toxicology report found no traces of alcohol or drugs in Mr Hooley’s system and a post mortem examination confirmed he died of an extensive head injury with multiple bone fractures.

The court heard how Mr Hooley had visited his GP in Middlewich in the months leading up to his death and said he felt some stress that was affecting his work. He was given a sick note for work and counselling was suggested which he undertook.

Reduced hours appeared to help Mr Hooley with his stress but his counsellor, Fiona Damm, concluded in his session that he had moderate to severe depression and severe anxiety, the court heard.

The dad-of-two told Ms Damm that he had experienced suicidal thoughts but no intentions, because of his love for his two daughters.

told Ms Damm that others saw him as a ‘good egg’ but that the death of his sister had affected him badly.

Having lost 19 family members since he was a child, Ms Damm stated he appeared a ‘bystander in his life’ and there was ‘much more despair and trauma under the surface than he opened up about’.

During his last visit to the GP he said he was feeling a lot better in himself and had resumed his normal work duties.

Mr Hooley and his wife Hayley were married for 12 years and had separated a year before his death. However they remained in constant contact and friends and Mrs Hooley stated how ‘everything was the same we just lived in different houses’.

They decided to live apart after Mr Hooley was deeply affected by the death of her nephew.

The pair spoke the morning of Mr Hooley’s death after he spent the night at his dad’s house.

Mrs Hooley told the court how he had spoken on two occasions previously about ending his life but gave her no reason to believe he would do it.

Both Mrs Hooley and Edward Hooley, Mr Hooley's father, said there was no indication in the lead up to his death that he would end his life.

Coroner Alan Moore concluded his death was by suicide and offered his condolences to Richard’s family and friends.

Moore added: “He did a sterling job as a family liaison officer as seen in this court room many times in that capacity.”

Protect The Protectors NPCC West Mids Police Assault on Police welfare Mental Health College of Policing Taser PTSD Armed Police Terror Threat Home Office Metropolitan Police illegal firearms AFO wellbeing WSP ARV Terror attack Firearms Officers Welfare Support Programme PFEW Police Scotland PFOA Armed Police Numbers
I have recently been medically retired from the police with PTSD following a serious injury on duty a few years ago. I would not be here if it was not for the PFOA - they literally saved my life. In February 2017 I was long-term sick off of work and I was in a very bad place. Whilst I have been unable to continue as a serving officer, I will forever be indebted to the PFOA. I will never be able to repay them for all that they did. All I can say is thank you so much from me and my family.
PFOA assisted by offering counselling/coaching support to officer’s family. A respite break was granted to allow the officer and his family to get away and spend some valuable time together as a family unit.
The PFOA purchased a new cross trainer and have loaned this to the officer to enable him to remain active and hopefully return to Ops.
PFOA arranges support for the officers involved prior to the Inquest and after by way of a respite breaks and NLP Coaching or Counselling.
I would like to personally thank the PFOA for the gifts we received for our daughter. The timing could not have been better. the week the gifts arrived, she had lost her hair and was due to go back to hospital for her next round of chemotherapy treatment which she was not looking forward to. Opening the parcel put a big smile back on her face for two reasons. firstly, because you had chosen as gifts exactly what she would have chosen for herself. But secondly and more importantly, because she realised other people ere also thinking of her and willing her to get better. People she had never met.
Thank you so much for the shopping vouchers, they will come in very handy. Thank you for helping my daddy to be himself again. Keep helping police officers because some people don’t understand how hard it can be and they are doing a great thing.
This act of kindness was greatly appreciated by us both at what is a very difficult time for our family.
© 2017 PFOA - Police Firearms Officers Association
Head Office: Chatteris Police Station, 18 East Park Street, Chatteris,
Cambridgeshire PE16 6LD - Tel: 01354 697 890
Email: info@pfoa.co.uk