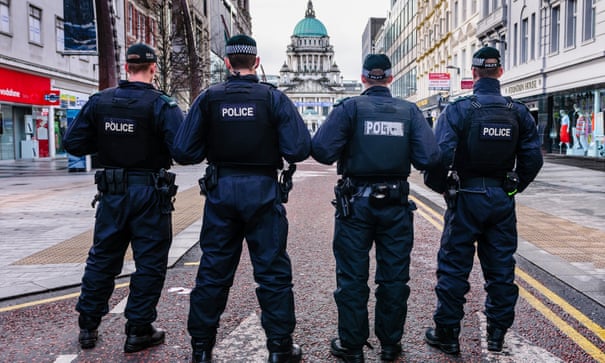 Rank and file police officers facing ongoing paramilitary death threats in Northern Ireland have come out against a special amnesty for members of the security forces who served during the Troubles.

The head of the Police Federation of Northern Ireland (PFNI) said on Wednesday that no one should be above the law.

The intervention of the federation’s chair, Mark Lindsay, in the debate over the Troubles’ legacy is at odds with the demands of the Conservative party leadership contender and defence secretary, Penny Mordaunt. She has backed calls for military veterans of the N.I conflict to be covered by amnestyfrom prosecution.

But Lindsay, who speaks for about 7,000 officers in the Police Service of Northern Ireland, also demanded that serving and retired personnel be given the same access to legal aid as law firms that are seeking to prosecute security forces’ veterans over controversial Troubles killings.

On legacy and mainly Tory-led demands for a military amnesty, Lindsay told the PFNI’s annual conference in Belfast: “There cannot be two different evidential thresholds. As police officers, both serving and retired, we have never sought to be treated any differently than other sections of our communities. A crime is a crime no matter who committed it.”

Referring to the IRA and loyalist paramilitary forces, which were responsible for the majority of violent deaths between 1969 and 1997, Lindsay continued: “Those who caused the bloodshed and mayhem must not be allowed to escape justice simply because their actions are weighed against a less rigorous legal test.

“It is perverse to set up institutions which will seek to investigate retired officers, whilst we have already had to release terrorist prisoners from prison, grant pardons and issue comfort letters. Let’s not forget also, that decommissioning [of IRA and loyalist weapons] legislation enabled terrorist groups to destroy ballistic and forensic evidence.”

He claimed there was a risk of “creating a new community of victims” among former and retired police officers who will “have to delve into their pensions and savings to mount their own legal defences” in legacy investigations.

Lindsay added: “The imbalance of the accuser getting seemingly unlimited legal aid, while the accused former officer is left to his or her own devices is not lost on anyone. That is wrong on every level. It is blatant discrimination.”

After a New IRA booby-trap murder attempt on a police officer at a Belfast golf club earlier this week, Lindsay said a recent PFNI workforce survey showed morale was low among nine out of 10 officers in the region.

The unilateral pursuit of police officers and security force personnel over the Troubles would only compound that rock bottom morale, Lindsay said.

He warned that the glorification of the murder of police officers even 100 years ago in the first shots of the Irish war of independence helped “radicalise the young people of today” and excused the murder of his officers in the 21st century.

In April this year a former paratrooper known as Soldier F was prosecuted for the murder of two people at a civil rights march on Bloody Sunday in Derry in 1972.

Soldier F’s cause has been championed by former army generals and Conservative MPs including the current defence secretary. Last month, Mordaunt said serving and retired troops should be covered by an amnesty that included conflicts stretching from Iraq and Afghanistan all the way back 50 years to the start of the Northern Ireland Troubles.

So far, the government and the Northern Ireland secretary, Karen Bradley, have resisted military veterans and their supporters’ demands for a blanket amnesty for troops in both present and past wars.

Police officers, both serving and retired, have opposed moves towards amnesties because it could lead to a catch-all amnesty regime that would also absolve former paramilitaries from prosecution over past Troubles crimes.

wellbeing Assault on Police illegal firearms AFO Mental Health WSP Metropolitan Police Protect The Protectors Home Office Terror Threat PFOA Firearms Officers ARV Armed Police Numbers PTSD West Mids Police IPCC welfare Armed Police Welfare Support Programme Police Scotland Taser College of Policing PFEW Terror attack
I have recently been medically retired from the police with PTSD following a serious injury on duty a few years ago. I would not be here if it was not for the PFOA - they literally saved my life. In February 2017 I was long-term sick off of work and I was in a very bad place. Whilst I have been unable to continue as a serving officer, I will forever be indebted to the PFOA. I will never be able to repay them for all that they did. All I can say is thank you so much from me and my family.
PFOA assisted by offering counselling/coaching support to officer’s family. A respite break was granted to allow the officer and his family to get away and spend some valuable time together as a family unit.
The PFOA purchased a new cross trainer and have loaned this to the officer to enable him to remain active and hopefully return to Ops.
PFOA arranges support for the officers involved prior to the Inquest and after by way of a respite breaks and NLP Coaching or Counselling.
I would like to personally thank the PFOA for the gifts we received for our daughter. The timing could not have been better. the week the gifts arrived, she had lost her hair and was due to go back to hospital for her next round of chemotherapy treatment which she was not looking forward to. Opening the parcel put a big smile back on her face for two reasons. firstly, because you had chosen as gifts exactly what she would have chosen for herself. But secondly and more importantly, because she realised other people ere also thinking of her and willing her to get better. People she had never met.
Thank you so much for the shopping vouchers, they will come in very handy. Thank you for helping my daddy to be himself again. Keep helping police officers because some people don’t understand how hard it can be and they are doing a great thing.
This act of kindness was greatly appreciated by us both at what is a very difficult time for our family.
© 2017 PFOA - Police Firearms Officers Association
Head Office: Chatteris Police Station, 18 East Park Street, Chatteris,
Cambridgeshire PE16 6LD - Tel: 01354 697 890
Email: info@pfoa.co.uk