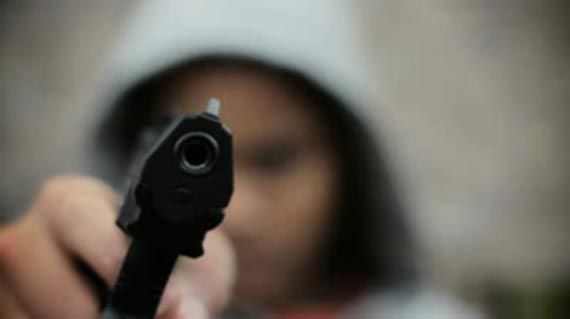 Scotland Yard launched a new campaign today urging people to give up their guns to keep them out of the hands of criminals.

Officers have urged members of the public to hand in any unwanted firearms, such as handguns, shotguns and antique weapons to "prevent them from falling into criminal hands".

The video, part of the Met's #GiveUpYourGuns campaign, comes following a 27 per cent hike in gun crime in the UK last year - with almost 50 per cent of offences recorded by the Metropolitan Police.

Launched to coincide with a national firearms surrender campaign, the Met's video targets gun crime among young people in the capital.
The social media video tells the story of a young man who underestimates the risks of carrying a gun.

Captions throughout the video show the young man's reasons for buying the gun, such as "it's just one weapon for protection" and challenges them.

It warned that the gun could take lives and may make the carrier a potential target.

The hard-hitting clip ends by showing the consequences of carrying a weapon, as the gun appears to be used to kill another young man.

"Whatever your reasons for carrying a gun, it will never be worth the risk. Give it up," the video says.
Data from the National Office of Statistics showed over two-thirds of police forces recorded a rise in offences involving firearms from June 2016 to June 2017.

Met Police was the force with the largest increase.

This came after a 42 per cent surge in gun crime offences were reported in London from April 2016 to April 2017, in addition to a worrying rise in the number of guns being carried on London's streets.

Met Police commissioner Cressida Dick spoke of her "huge concern" about the rise in gun crime in April.

Commander Jim Stokley, of the Met’s Trident and Area Crime Command, said: “We urge members of the public who may have any unwanted guns to hand them in to police to prevent them from falling into criminal hands.

“The guns we see being used in shooting incidents in London are often converted, formerly legally-owned, firearms.

“Others are acquired and distributed by criminal networks to threaten or harm their local communities.

“We know that friends, family members and girlfriends of gang members are often asked to look after firearms to hide them from police, but saying ‘it’s not my gun’ is not a defence.

"Illegal possession of a firearm can mean five years behind bars, and if you are found guilty of possession with intent to supply, that can lead to an even longer prison sentence.

“Each firearm we retrieve helps to reduce the threat of gun crime in London.”

“I would encourage anyone who knows about, or owns, an illegal firearm, to surrender it at one of the designated police stations across the UK.“This can help keep dangerous weapons out of the wrong hands.”

The surrender will run for two weeks from Monday, 13 to Sunday, 26 November. Those who would like to hand in a firearm or ammunition can check the opening times of their station in advance.

The national firearms surrender is organised by the National Ballistics Intelligence Service.

If you know of anyone involved with illegal firearms call police on 101 or independent charity Crimestoppers (anonymously) on 0800 555 111.

Protect The Protectors Home Office College of Policing Taser illegal firearms West Mids Police Welfare Support Programme Assault on Police Armed Police Numbers AFO Police Scotland Metropolitan Police Armed Police PFOA ARV Mental Health PTSD WSP PFEW Firearms Officers welfare Terror Threat Terror attack IPCC wellbeing
I have recently been medically retired from the police with PTSD following a serious injury on duty a few years ago. I would not be here if it was not for the PFOA - they literally saved my life. In February 2017 I was long-term sick off of work and I was in a very bad place. Whilst I have been unable to continue as a serving officer, I will forever be indebted to the PFOA. I will never be able to repay them for all that they did. All I can say is thank you so much from me and my family.
PFOA assisted by offering counselling/coaching support to officer’s family. A respite break was granted to allow the officer and his family to get away and spend some valuable time together as a family unit.
The PFOA purchased a new cross trainer and have loaned this to the officer to enable him to remain active and hopefully return to Ops.
PFOA arranges support for the officers involved prior to the Inquest and after by way of a respite breaks and NLP Coaching or Counselling.
I would like to personally thank the PFOA for the gifts we received for our daughter. The timing could not have been better. the week the gifts arrived, she had lost her hair and was due to go back to hospital for her next round of chemotherapy treatment which she was not looking forward to. Opening the parcel put a big smile back on her face for two reasons. firstly, because you had chosen as gifts exactly what she would have chosen for herself. But secondly and more importantly, because she realised other people ere also thinking of her and willing her to get better. People she had never met.
Thank you so much for the shopping vouchers, they will come in very handy. Thank you for helping my daddy to be himself again. Keep helping police officers because some people don’t understand how hard it can be and they are doing a great thing.
This act of kindness was greatly appreciated by us both at what is a very difficult time for our family.
© 2017 PFOA - Police Firearms Officers Association
Head Office: Chatteris Police Station, 18 East Park Street, Chatteris,
Cambridgeshire PE16 6LD - Tel: 01354 697 890
Email: info@pfoa.co.uk