BBC NEWS - PC Kelly Ellis has her finger hovering over the trigger of her Heckler and Koch G36 rifle.

She has a split second to decide whether to open fire on a man who appears to be drunk and suicidal and is holding a shotgun, pointing it at the ground.

Her colleague is calmly - but firmly - explaining the right thing to do is to put the weapon down.

But what if he does not? What if he raises the barrels? What then?

Welcome to the firearms training school. 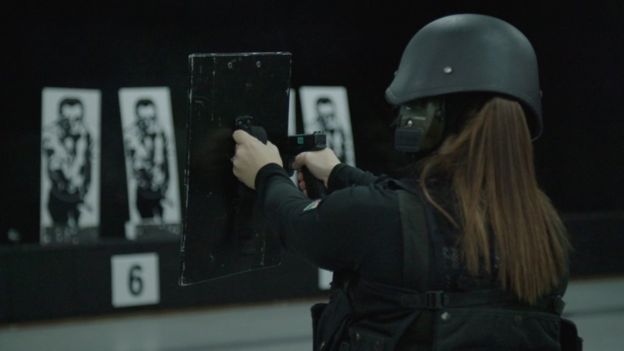 Over three months, the BBC's Victoria Derbyshire programme had unique access to some of the new recruits being assessed in Cheshire.

These are the scenarios - the life and death decisions - that any British officer who wants to carry a gun must go through.
And if they make the wrong decision - pull the trigger when there was no need, or pull it when it is too late - then they are out. They will not make the grade.

By the end of next year, the UK will have about 7,500 armed police officers, after the government reversed a fall in their numbers since 2010.

Officers with years of firearms experience had been leaving their forces as police budgets were cut.

Now the numbers are rising again because security chiefs want more firearms teams available to counter any attempted Paris-style attack on the streets of Britain.

But given that the job requires volunteers - and those volunteers may one day be accountable for their actions before a jury - have the new recruits got what it takes?

While her friends have dubbed her "Lara Croft" - after the Tomb Raider action hero - PC Ellis says her parents were "apprehensive" when she first told them she wanted to train as a police firearms officer.

However, she says: "I tried to explain to them that the training we get, the weapons we are carrying, that actually I'm going to be more protected than I am now as a regular office out on the streets."

She says the course is "easily the hardest thing I've ever had to do". "It's just a lot to take in and a lot to remember. It's exhausting really."
'Life on the line'

And she says the possibility of coming face to face with an armed situation is now becoming more of a reality.

"Sometimes I go home from here of an evening, and you see what's going on in the news and you just think, 'In a few months time, if I pass this course, that could be me, going out to that job, first on the scene, having to discharge a weapon.'"

She adds: "It is about putting your life on the line, but that's what I want to do.

"I get a massive sense of achievement from doing it, as well."

The firearms centre in Cheshire trains officers from all over the country.

We watched 15 recruits being taught how to:

And that includes saving the lives of people they have just shot: according to the programme, they are trained to incapacitate a threat - not to kill.

Did they pass? Well, watch our fly-on-the-wall film to find out.

Without giving too much away, what I and my colleagues John Owen, producer, and Martin McQuade, camera, witnessed was an awful lot of hard work.

There were some moments where recruits got a dressing down by their trainers for failing to learn fast enough.

The point was repeatedly made to them that if they were slow in making the right decision, the consequences could be fatal.

And they also needed to learn when to use words, rather than bullets, to stop a situation spiralling out of control.

Sir Bernard Hogan Howe, the recently retired Metropolitan Police Commissioner, warned that his force was recruiting from a very shallow pool of officers willing to carry a gun.

That, he says, is because many don't want the risks that come with the job - not necessarily the risk of being shot, but of ending up in court or under investigations for years.

Despite the political and media focus being on terrorism, the reality is that most of armed response policing work is unchanged from year to year.

Sometimes they'll be called to an armed robbery - less often than they used to be.

But most of the time they'll be dealing with extreme domestic violence situations, organised gang crime incidents and, sadly, mentally unwell people capable of doing themselves, or others harm.

So were the trainee officers I saw up to the task? Watch the film and decide for yourself.

Metropolitan Police WSP Terror Threat wellbeing PSNI welfare PTSD PFOA Armed Police PFEW Mental Health ARV Protect The Protectors West Mids Police Armed Police Numbers Terror attack Taser IPCC Police Scotland Home Office Welfare Support Programme Assault on Police Firearms Officers illegal firearms AFO
I have recently been medically retired from the police with PTSD following a serious injury on duty a few years ago. I would not be here if it was not for the PFOA - they literally saved my life. In February 2017 I was long-term sick off of work and I was in a very bad place. Whilst I have been unable to continue as a serving officer, I will forever be indebted to the PFOA. I will never be able to repay them for all that they did. All I can say is thank you so much from me and my family.
PFOA assisted by offering counselling/coaching support to officer’s family. A respite break was granted to allow the officer and his family to get away and spend some valuable time together as a family unit.
The PFOA purchased a new cross trainer and have loaned this to the officer to enable him to remain active and hopefully return to Ops.
PFOA arranges support for the officers involved prior to the Inquest and after by way of a respite breaks and NLP Coaching or Counselling.
I would like to personally thank the PFOA for the gifts we received for our daughter. The timing could not have been better. the week the gifts arrived, she had lost her hair and was due to go back to hospital for her next round of chemotherapy treatment which she was not looking forward to. Opening the parcel put a big smile back on her face for two reasons. firstly, because you had chosen as gifts exactly what she would have chosen for herself. But secondly and more importantly, because she realised other people ere also thinking of her and willing her to get better. People she had never met.
Thank you so much for the shopping vouchers, they will come in very handy. Thank you for helping my daddy to be himself again. Keep helping police officers because some people don’t understand how hard it can be and they are doing a great thing.
This act of kindness was greatly appreciated by us both at what is a very difficult time for our family.
© 2017 PFOA - Police Firearms Officers Association
Head Office: Chatteris Police Station, 18 East Park Street, Chatteris,
Cambridgeshire PE16 6LD - Tel: 01354 697 890
Email: [email protected]