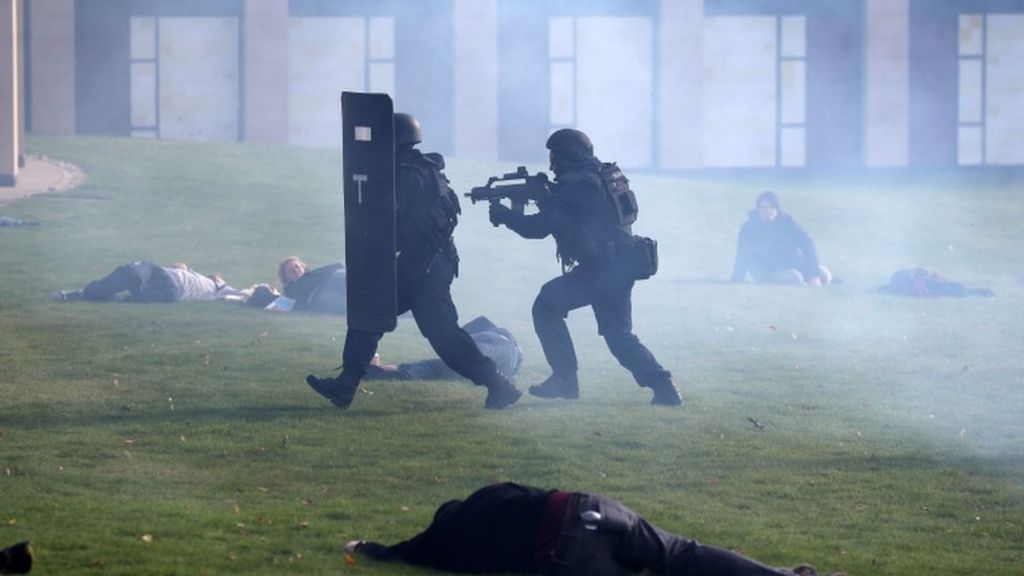 In the simulation, "terrorists" drove a truck into a building in Edinburgh, with dozens of volunteers posing as casualties.

A joint counter-terrorism exercise to enhance cross-border co-operation in the fight against terror has been launched by police forces in Scotland and England.

A mock attack has been staged at the Royal Bank Headquarters in Edinburgh, in which "terrorists" drove a truck into a building.

They then used knives and automatic weapons to "inflict" mass casualties.

The three-day training exercise, codenamed Operation Border Reiver, is designed to test the response of the police and emergency services.

It will last until 5 October, extending to other sites and properties in Scotland and the North East of England.
About 100 volunteers, posing as casualties, lay sprawled around the grounds of RBS near Edinburgh Airport following the mock attack. They were treated by ambulance crews carrying shields and wearing body armour.

The scenario involved a truck being driven into a building (represented by a tent) and the "terrorists" then shooting and stabbing people in the vicinity.

As armed police officers arrived on the scene, the "terrorists" retreated inside a building containing members of the public.

Groups of firearms officers laid siege to the building and the noise of gunfire and explosions rang out as the situation developed.
Police Scotland's Assistant Chief Constable, Bernard Higgins, told Sky News: "The scenario is based on recent tragic events. We have been planning for this for about 10, 11 months now.

"As recent events have unfolded, we've changed the tactical parameters of what we're going to do. It is based on a large-scale terrorist incident where there will be a significant number of casualties.

"Exercises in the past have been based on what had happened in the past. This is probably the most current exercise in terms of the threat that we believe we will face in the UK.

"I think many years ago, the terrorist threat was pretty sophisticated. As people have seen, what we now face is pretty much low sophistication, person-borne attacks using vehicle or bladed weapons but the impact is significant. That's the broad scenario that we are testing."

Home Secretary Amber Rudd played a role in the exercise, taking time out from the Conservative Party conference to chair a COBR meeting involving ministers from the UK and Scottish governments.

She said: "The events of this year have shown why it is vital that the emergency services, Government and agencies prepare and rehearse our response to potential terrorist attacks.

"The professionalism with which front line services dealt with the atrocities in London and Manchester is in part due to the planning and practice that goes into exercises like this."

Ah! This time they are admitting that it is an exercise!

0 Cancel Reply
Ah! This time they are admitting that it is an exercise!
Cancel Update Comment
Subscribe to our blog Unsubscribe from our blog

PTSD AFO Taser PFEW WSP welfare Terror attack West Mids Police Police Scotland IPCC Welfare Support Programme Mental Health Home Office Metropolitan Police Assault on Police ARV Terror Threat wellbeing PSNI Armed Police illegal firearms Armed Police Numbers Protect The Protectors Firearms Officers PFOA
I have recently been medically retired from the police with PTSD following a serious injury on duty a few years ago. I would not be here if it was not for the PFOA - they literally saved my life. In February 2017 I was long-term sick off of work and I was in a very bad place. Whilst I have been unable to continue as a serving officer, I will forever be indebted to the PFOA. I will never be able to repay them for all that they did. All I can say is thank you so much from me and my family.
PFOA assisted by offering counselling/coaching support to officer’s family. A respite break was granted to allow the officer and his family to get away and spend some valuable time together as a family unit.
The PFOA purchased a new cross trainer and have loaned this to the officer to enable him to remain active and hopefully return to Ops.
PFOA arranges support for the officers involved prior to the Inquest and after by way of a respite breaks and NLP Coaching or Counselling.
I would like to personally thank the PFOA for the gifts we received for our daughter. The timing could not have been better. the week the gifts arrived, she had lost her hair and was due to go back to hospital for her next round of chemotherapy treatment which she was not looking forward to. Opening the parcel put a big smile back on her face for two reasons. firstly, because you had chosen as gifts exactly what she would have chosen for herself. But secondly and more importantly, because she realised other people ere also thinking of her and willing her to get better. People she had never met.
Thank you so much for the shopping vouchers, they will come in very handy. Thank you for helping my daddy to be himself again. Keep helping police officers because some people don’t understand how hard it can be and they are doing a great thing.
This act of kindness was greatly appreciated by us both at what is a very difficult time for our family.
© 2017 PFOA - Police Firearms Officers Association
Head Office: Chatteris Police Station, 18 East Park Street, Chatteris,
Cambridgeshire PE16 6LD - Tel: 01354 697 890
Email: [email protected]