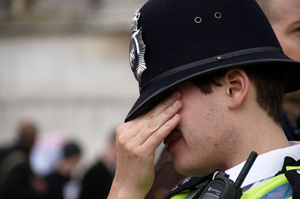 Up to 300,000 people with long-term mental health problems have to leave their jobs each year, a report says.
It also claims poor mental health costs the UK economy up to £99bn each year.

Prime Minister Theresa May, who commissioned the report, said it showed "we need to take action". She is asking NHS England and the civil service to accept the report's recommendations.

Paul Farmer, co-author of the Thriving At Work report, said mental health was a taboo subject in many workplaces.

Can you talk about mental health at work?

Mr Farmer, who is chief executive of mental health charity Mind, said: "Opportunities are missed to prevent poor mental health and ensure that employees who may be struggling get the support they need."In many instances employers simply don't understand the crucial role they can play, or know where to go for advice and support."'My confidence is back'

The review makes 40 recommendations about how employers and the government can better support employees to remain at work, such as through creating an online wellbeing portal and using digital technology to support workers in the gig economy.Companies are also being encouraged to include a section on employee mental health in their annual reports.

Currently only 11% of companies do this, the report found One employer the report praised is the insurer Aviva.

James Tringham has worked for them for seven years. He said the company helped him get his life back on track after it was crippled by his bipolar disorder:

"In 2009 I'd reached crisis point with my mental health, and I gave up my career as a solicitor."I was unable to work for over a year - the prospect of returning to work was just so frightening and not something that I could imagine."

Eventually he got a job in the insurer's contact centre. He said: "They gave me a way back into employment and I have worked my way back up.

"Aviva have been brilliant in supporting me to manage my mental health at work, and have given me my confidence back."There's an understanding, which means little things like adjusting my workload when I'm feeling on the low side can really help. And the staff - both officially and unofficially - form a great support network."

The review says employers should:

The review said that people with long term mental health problems were leaving jobs at twice the rate of colleagues with no such issues, although it did say that some people may be counted twice - if they left one job, returned to work elsewhere after a break but were then unable to continue in their new post.

The report also pointed out the cost to employers, estimating they were losing £42bn each year due to staff suffering from mental health problems.

Mrs May is asking NHS England and the civil service - which together employ more than two million people - to implement the recommendations.She said: "It is only by making this an everyday concern for everyone that we change the way we see mental illness, so that striving to improve your mental health - whether at work or at home - is seen as just as positive as improving our physical well-being."The government said it is considering the legislative changes suggested.

Firearms Officers Protect The Protectors Metropolitan Police Terror Threat illegal firearms Home Office AFO Armed Police Numbers welfare PFOA WSP PFEW PTSD Terror attack ARV IPCC Armed Police Taser Welfare Support Programme Police Scotland West Mids Police PSNI Mental Health Assault on Police wellbeing
I have recently been medically retired from the police with PTSD following a serious injury on duty a few years ago. I would not be here if it was not for the PFOA - they literally saved my life. In February 2017 I was long-term sick off of work and I was in a very bad place. Whilst I have been unable to continue as a serving officer, I will forever be indebted to the PFOA. I will never be able to repay them for all that they did. All I can say is thank you so much from me and my family.
PFOA assisted by offering counselling/coaching support to officer’s family. A respite break was granted to allow the officer and his family to get away and spend some valuable time together as a family unit.
The PFOA purchased a new cross trainer and have loaned this to the officer to enable him to remain active and hopefully return to Ops.
PFOA arranges support for the officers involved prior to the Inquest and after by way of a respite breaks and NLP Coaching or Counselling.
I would like to personally thank the PFOA for the gifts we received for our daughter. The timing could not have been better. the week the gifts arrived, she had lost her hair and was due to go back to hospital for her next round of chemotherapy treatment which she was not looking forward to. Opening the parcel put a big smile back on her face for two reasons. firstly, because you had chosen as gifts exactly what she would have chosen for herself. But secondly and more importantly, because she realised other people ere also thinking of her and willing her to get better. People she had never met.
Thank you so much for the shopping vouchers, they will come in very handy. Thank you for helping my daddy to be himself again. Keep helping police officers because some people don’t understand how hard it can be and they are doing a great thing.
This act of kindness was greatly appreciated by us both at what is a very difficult time for our family.
© 2017 PFOA - Police Firearms Officers Association
Head Office: Chatteris Police Station, 18 East Park Street, Chatteris,
Cambridgeshire PE16 6LD - Tel: 01354 697 890
Email: info@pfoa.co.uk