Man 'reaching for knife' tasered by police outside Parliament 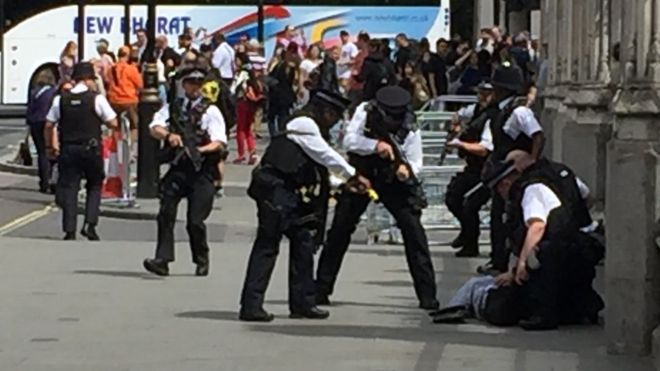 A man was brought down with a Taser outside the Palace of Westminster after he reached for a knife when approached by officers, Scotland Yard has said.

A bearded man, wearing black trousers and a grey sweatshirt, was seen being held against the fence with his arms behind his back by a police officer.

Police said the man was arrested on suspicion of possessing a knife.

But they "remain open minded as to whether terrorism was a motive", they said.

The man was held just yards from where PC Keith Palmer was stabbed to death by terrorist Khalid Masood in March.

Joe Murphy, London Evening Standard political editor, tweeted: "There were shouts of 'knife, knife, knife' and man was brought down with a Taser."

BBC deputy political editor John Pienaar said the latest incident ended very swiftly with the man being taken away in a police van.

While the gates are closed, the road and pavement opposite remained open and the incident had no effect on traffic in Parliament Square, he said. In a statement, the Metropolitan Police said "it is too early to understand the motivation" of the man "so we have not declared this a terrorist incident".

"However, given the location, the circumstances and recent tragic events, the MPS Counter Terrorism Command will be investigating this incident.

"We remain open-minded as to whether terrorism was a motive."

Eyewitness Bradley Allen, 19, from Barking, east London, who was walking past Parliament, said he saw a man "who looked quite angry with fists quite clenched".

"He stared at me and my mate and we walked past him. Within seconds there was a shout and police ran out of the front gate shouting at him 'Get on the floor, get on the ground'.

"Armed police everywhere, telling everyone to move back, and we all got pushed back."

Security around Westminster was tightened following the attack by Masood, who was shot dead after fatally stabbing PC Palmer as he guarded Carriage Gate.

A review of security at the perimeter of the parliamentary estate was ordered by Commons Speaker John Bercow following the incident.

The use of armed officers and physical barriers have become more visible, while a permanent barrier has been erected to protect pedestrians on Westminster Bridge, where Masood murdered five people and injured more than 50 others by mounting the pavement in a car.

Rigorous training for Kent Police to safely use Tasers

WSP wellbeing West Mids Police Assault on Police AFO illegal firearms PSNI Terror Threat NPCC Protect The Protectors PTSD Metropolitan Police PFEW Home Office Armed Police Numbers welfare Welfare Support Programme Mental Health Police Scotland Firearms Officers Taser Terror attack PFOA ARV Armed Police
I have recently been medically retired from the police with PTSD following a serious injury on duty a few years ago. I would not be here if it was not for the PFOA - they literally saved my life. In February 2017 I was long-term sick off of work and I was in a very bad place. Whilst I have been unable to continue as a serving officer, I will forever be indebted to the PFOA. I will never be able to repay them for all that they did. All I can say is thank you so much from me and my family.
PFOA assisted by offering counselling/coaching support to officer’s family. A respite break was granted to allow the officer and his family to get away and spend some valuable time together as a family unit.
The PFOA purchased a new cross trainer and have loaned this to the officer to enable him to remain active and hopefully return to Ops.
PFOA arranges support for the officers involved prior to the Inquest and after by way of a respite breaks and NLP Coaching or Counselling.
I would like to personally thank the PFOA for the gifts we received for our daughter. The timing could not have been better. the week the gifts arrived, she had lost her hair and was due to go back to hospital for her next round of chemotherapy treatment which she was not looking forward to. Opening the parcel put a big smile back on her face for two reasons. firstly, because you had chosen as gifts exactly what she would have chosen for herself. But secondly and more importantly, because she realised other people ere also thinking of her and willing her to get better. People she had never met.
Thank you so much for the shopping vouchers, they will come in very handy. Thank you for helping my daddy to be himself again. Keep helping police officers because some people don’t understand how hard it can be and they are doing a great thing.
This act of kindness was greatly appreciated by us both at what is a very difficult time for our family.
© 2017 PFOA - Police Firearms Officers Association
Head Office: Chatteris Police Station, 18 East Park Street, Chatteris,
Cambridgeshire PE16 6LD - Tel: 01354 697 890
Email: [email protected]