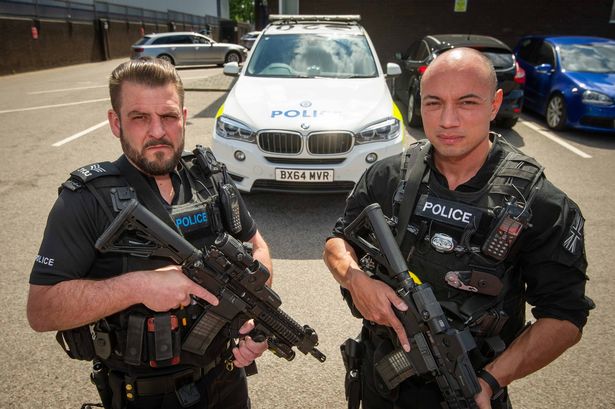 A car has been rammed and a passenger is believed to be carrying a gun - this isn't Line of Duty, this is a real-life situation that Birmingham armed officers have been sent to.

While most of us are tucked up in bed, these officers are patrolling the streets, ready to swoop on the latest incident - and sadly there are a lot in Birmingham and beyond.

We teamed up with Insp Charles Vale and Sgt John Symes, who are on the Birmingham East patrol team, based in Aston, to see what a typical night on duty is like.

Insp Vale, who is in charge of 60 officers, has a cool, calm, polite manner about him - essential qualities to have in this line of work.

The 40-year-old, who has been a firearms officer for ten years, is well kitted up and wears a protective bullet and stab proof vest, Sig Sauer 320 handgun, Taser gun, pepper spray, first aid kit, handcuffs, and walkie-talkie device.

He also wears glasses and a protective hat. In his hands, he carries a Sig Sauer 516 rifle. Sgt Symes is an amateur boxer who has been in the firearms unit since 2006.

The 45-year-old drives the BMW patrol car as we head out on the shift out of Aston and into Birmingham city centre. He is an advanced driver, so I'm confident I'm in safe hands.

The patrol concentrates on driving through crime hotspot areas.

At one point on our journey Sergeant Hymes points out a packed barber shop where customers are having a glance at the patrol car passing by and says: "That's where the gangsters go to get their hair cuts."

Sergeant Symes describes being at the centre of one dramatic situation, he was called out to in Weoley Castle where he had to face a man who was pointing a 'weapon' hidden under a sweatshirt at him.

He said: "It was a very fraught situation. The guy told us he had a gun which was being pointed in our direction but hidden under his sweater top.

"Finally we managed to persuade him to surrender to us and when he did we discovered it wasn't a gun under his sweater but a bar of Cadbury's Dairy Milk.

"I did go home that night and think 'God what if he had been shot for a bar of chocolate.' It was a close call."

As we make our way out towards Erdington a call comes through the operation command centre in Bournville. There has been an incident where a car has been rammed in Coventry, with claims the passenger in the vehicle has a shotgun.

Immediately Sergeant Symes springs into action, he puts his glasses with camera on, switches on the blue lights and we head down the M6 to Coventry weaving through the traffic at high speed as we go.

What soon becomes clear is how many terrible drivers are on the road and it takes a few persistent pips on the horn before those in front start to move.

At speed, we head to Coventry and enter the outskirts of the city looking for the car in question. In the end, we are told to stand down as another Armed Response Vehicle (ARV) has stopped the car.

As we head back down the M6 towards Birmingham another call comes in that a Skoda car has a shotgun in the vehicle. We race to the scene on blue lights where the driver has been pulled over. It turns out to be a malicious call.

Inspector Vale said malicious and hoax calls are something they are increasingly being called out to.

As the night draws on we get one final call and it is back to Coventry where a man is believed to have attacked his wife with a machete. Luckily she is safe and outside the property . The control centre tells us to go to the scene. His door has been forced in by police and he is being arrested. It turns out his wife has suffered superficial wounds to her fingers and the man is later released without charge.

We then make our way back to Birmingham. Our shift is coming to a close but we will respond to any other incidents before heading back to base in Aston. It remains quiet.

Inspector Vale sums up the events on the night and says: "It was quite a quiet evening for us in terms of firearms deployments but we were called to several incidents which were dealt with and we managed to do a good patrol of our target areas."

Sergeant Symes talks about the new body cameras introduced two years ago which all officers now use.

Armed officers wear cameras on their glasses and he said it has been a brilliant move for officers.

He said: "The body cameras have been a dream. They can be vital if there needs to be an investigation by the IPCC. As the cameras are worn on the glasses investigators can see exactly the view the officer had at the time. They are also excellent for us to go back after an incident and to just review the operation."

Then it was handover for the next team of firearms officers to go and do it all again.

Sergeant Symes tells us about his experiences over 13 years in the firearms unit.

He tells me he has never shot anyone in that time and neither has Inspector Vale during his 10 years in the force.

Sergeant Symes also explained how much support the armed officers are given and the necessity to let superiors know if they are struggling with stress.

He said: "I was struggling at one point with personal issues as my partner at the time had serious health issues. I knew my mind wasn't totally on the job, that my concentration levels weren't where they should be. I told my superior and I was taken off the unit for a short period until I got myself sorted. The support is there for any officer and they are all made aware of it."

Insp Vale explains what qualities the police look for in a new recruit. It is clear these guys are not only super-fit but super-smart.

He said: "I think some people have an image of firearms officers being ex-military, macho-type hard men, who are hot shots with guns.

"Well, that portrayal is certainly not reality.

PFOA welfare PTSD Protect The Protectors College of Policing PFEW Metropolitan Police AFO West Mids Police Terror attack Home Office wellbeing Police Scotland illegal firearms Mental Health PSNI Terror Threat Welfare Support Programme Taser ARV Armed Police WSP Assault on Police Armed Police Numbers Firearms Officers
I have recently been medically retired from the police with PTSD following a serious injury on duty a few years ago. I would not be here if it was not for the PFOA - they literally saved my life. In February 2017 I was long-term sick off of work and I was in a very bad place. Whilst I have been unable to continue as a serving officer, I will forever be indebted to the PFOA. I will never be able to repay them for all that they did. All I can say is thank you so much from me and my family.
PFOA assisted by offering counselling/coaching support to officer’s family. A respite break was granted to allow the officer and his family to get away and spend some valuable time together as a family unit.
The PFOA purchased a new cross trainer and have loaned this to the officer to enable him to remain active and hopefully return to Ops.
PFOA arranges support for the officers involved prior to the Inquest and after by way of a respite breaks and NLP Coaching or Counselling.
I would like to personally thank the PFOA for the gifts we received for our daughter. The timing could not have been better. the week the gifts arrived, she had lost her hair and was due to go back to hospital for her next round of chemotherapy treatment which she was not looking forward to. Opening the parcel put a big smile back on her face for two reasons. firstly, because you had chosen as gifts exactly what she would have chosen for herself. But secondly and more importantly, because she realised other people ere also thinking of her and willing her to get better. People she had never met.
Thank you so much for the shopping vouchers, they will come in very handy. Thank you for helping my daddy to be himself again. Keep helping police officers because some people don’t understand how hard it can be and they are doing a great thing.
This act of kindness was greatly appreciated by us both at what is a very difficult time for our family.
© 2017 PFOA - Police Firearms Officers Association
Head Office: Chatteris Police Station, 18 East Park Street, Chatteris,
Cambridgeshire PE16 6LD - Tel: 01354 697 890
Email: info@pfoa.co.uk