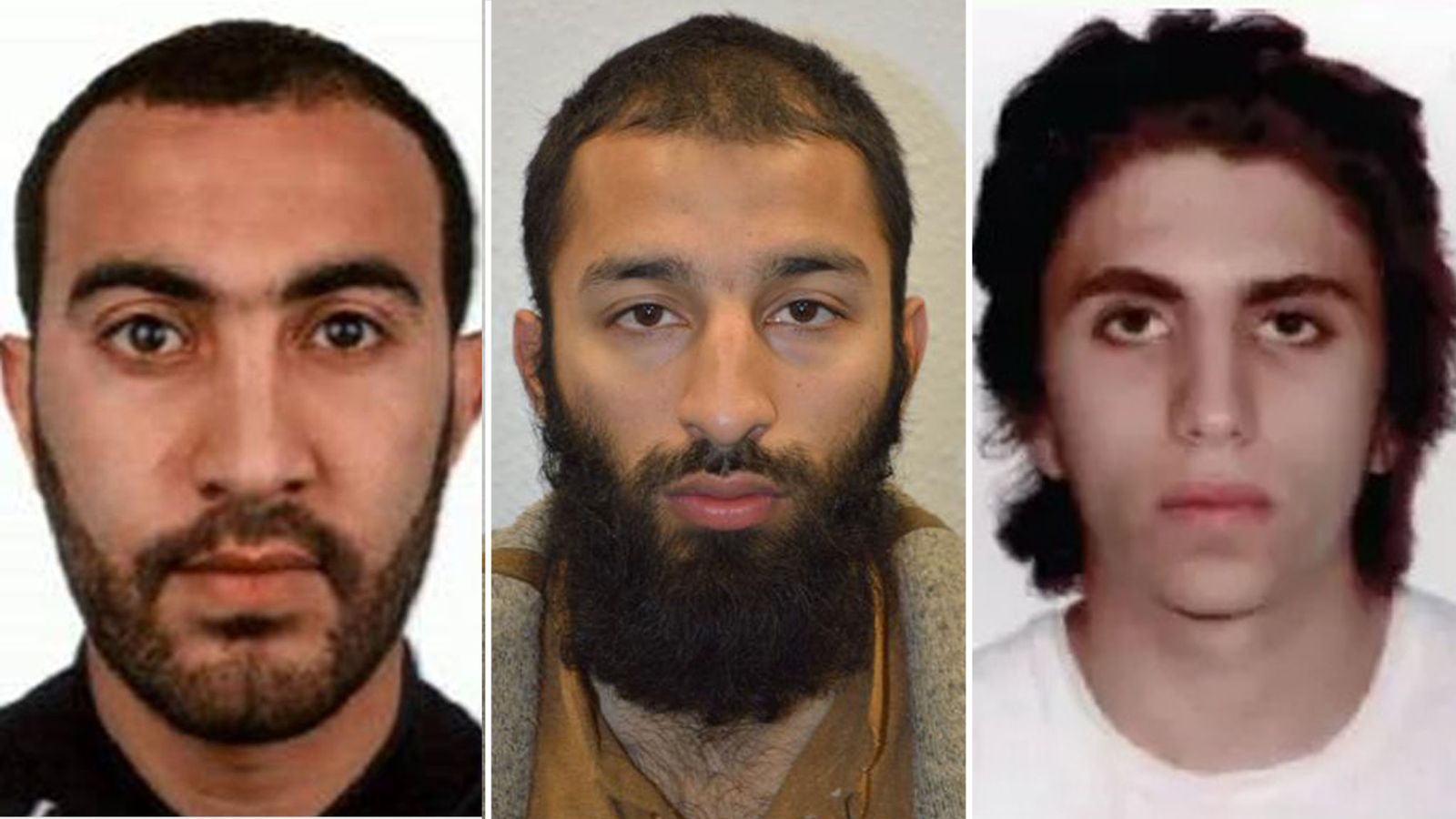 A jury at the inquest into the deaths of the three London Bridge attackers agrees they were lawfully killed by armed officers.

Three terrorists who murdered eight innocent people and injured almost 50 others around London Bridge were lawfully killed by armed police, an inquest jury has concluded.

Khuram Butt, Rachid Redouane and Youssef Zaghba were shot dead as they rampaged through the capital's Borough Market on 3 June 2017, stabbing members of the public after running people over on the nearby bridge.

An inquest into the deaths of the three men heard graphic accounts of how unarmed officers tried to confront and track the attackers in the minutes before armed back-up arrived.

PC Bartosz Tchorzewski and PC Sam Balfour were among the first officers to arrive at Borough Market, as the three terrorists continued to confront and stab members of the public.

PC Balfour said: "There was a call that came out pretty much as we were arriving at the back gates of Waterloo police station, a call came out to say a van had hit a number of pedestrians on London Bridge and had crashed.

"Westminster Bridge was still very much in our memory, how that attack was carried out.

"We had been briefed a lot on the sort of tactics that we know that Islamist-inspired terrorists would use.

"So I was very aware that is what we were going into."

PC Tchorzewski said the officers were being updated on police radio, with multiple reports suggesting a very serious incident was unfolding.

"You assume the worst and you try to think what you may encounter and what you will do but, to be honest, nothing can prepare you for that," he said.

"No kind of briefings or news can give you a proper overview, to face something like that in real life.

"It is totally different, a different experience."

The officers said when they reached the street the attackers were on, all they had for protection were their police issue batons.

PC Balfour said: "Three of them are stood there in a line, holding knives.

"One of them was raising it above their head and they were shouting at us.

"Straight away I drew my baton and tried to get on the radio and tell everyone where they were."

The officers said they had little choice but to back off, continue to track the terrorists, and help guide armed units to their location.

When armed response vehicles reached the scene, the attackers were in the process of stabbing their final victim, Antonio Filis.

Mr Filis told the hearing at the Old Bailey in central London that he wandered into the middle of the attack, as he was looking at his mobile phone.

"I was walking at quite a quick pace," he said.

"My sight was not directed in front, but down. I didn't notice any people initially until I came across three individuals.

"At least one of the three looked at me for a very brief instant. He came towards my direction at a fast pace.

"I felt a blow on my head. I couldn't tell what hit me. At first I thought it was a bottle or another blunt instrument. I had no idea it was a knife.

When all was said and done, I could only think they were going for my throat."

The men only stopped their attack on Mr Filis as the armed response vehicles pulled up at the scene.

The inquest was told that Butt began running towards the first officer out of the vehicle, who backed off a couple of paces, before opening fire.

The two other attackers ran at another two armed officers and were also immediately shot.

Amid fears the men were wearing suicide bomb vests, which later turned out to be fakes, officers fired follow-up shots, almost 50 in total.

During that first hearing, the inquest was told of multiple occasions where intelligence on the attackers was known, but little - if any - action took place.

Butt, in particular, was on the radar of the security services, because of his links to extremism.

He had been under partial surveillance in the months leading up to the London Bridge attack, but that failed to pick up on the group's preparations for their actions on 3 June.

Two years before the attack, Butt's own brother-in-law had become so concerned about his descent into extremism, he called the anti-terrorist hotline.

Usman Darr said he was deeply alarmed by one conversation with Butt in the aftermath of a murder, where a captured Jordanian pilot was burned to death by the Islamic State terror group.

"He was justifying the burning of the pilot," Mr Darr said.

"He explained to me what had happened, as if he had ears on the ground.

"He told me about how they captured him, they brought him in front of a council, which included the parents of the dead kids who died in the village attack.

"And he explained to me how they all came to an understanding and had a vote... the pilot had to die in the same way their kids had died.

"That's when I knew that he's got information which is not out there in the mainstream, someone is feeding him."

Mr Darr said he decided to pass on his concerns to the anti-terrorist tip-off phoneline.

"I made a decision that he needs to be watched, I couldn't take the risk," he added.

The inquest was told that the contents of that call were never passed to MI5 or counter-terror detectives.

The families of those who died believe opportunities were missed, which could have prevented the attack.

But, ultimately, the coroner said the responsibility for the events of 3 June 2017 lay with the three attackers, who the inquest jury agreed were lawfully killed by police firearms officers.

Police Scotland West Mids Police Terror Threat Welfare Support Programme Taser AFO Mental Health WSP wellbeing Metropolitan Police illegal firearms Armed Police Numbers College of Policing Armed Police welfare PFEW Terror attack NPCC Assault on Police PTSD Home Office PFOA ARV Firearms Officers Protect The Protectors
I have recently been medically retired from the police with PTSD following a serious injury on duty a few years ago. I would not be here if it was not for the PFOA - they literally saved my life. In February 2017 I was long-term sick off of work and I was in a very bad place. Whilst I have been unable to continue as a serving officer, I will forever be indebted to the PFOA. I will never be able to repay them for all that they did. All I can say is thank you so much from me and my family.
PFOA assisted by offering counselling/coaching support to officer’s family. A respite break was granted to allow the officer and his family to get away and spend some valuable time together as a family unit.
The PFOA purchased a new cross trainer and have loaned this to the officer to enable him to remain active and hopefully return to Ops.
PFOA arranges support for the officers involved prior to the Inquest and after by way of a respite breaks and NLP Coaching or Counselling.
I would like to personally thank the PFOA for the gifts we received for our daughter. The timing could not have been better. the week the gifts arrived, she had lost her hair and was due to go back to hospital for her next round of chemotherapy treatment which she was not looking forward to. Opening the parcel put a big smile back on her face for two reasons. firstly, because you had chosen as gifts exactly what she would have chosen for herself. But secondly and more importantly, because she realised other people ere also thinking of her and willing her to get better. People she had never met.
Thank you so much for the shopping vouchers, they will come in very handy. Thank you for helping my daddy to be himself again. Keep helping police officers because some people don’t understand how hard it can be and they are doing a great thing.
This act of kindness was greatly appreciated by us both at what is a very difficult time for our family.
© 2017 PFOA - Police Firearms Officers Association
Head Office: Chatteris Police Station, 18 East Park Street, Chatteris,
Cambridgeshire PE16 6LD - Tel: 01354 697 890
Email: info@pfoa.co.uk