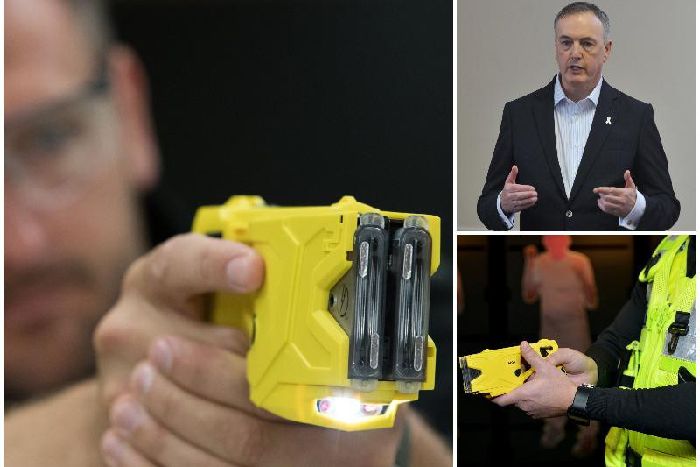 Hundreds more police officers will be trained to use Tasers following a rise in attacks, it can be revealed.

Lancashire’s force is planning to increase the number of officers able to use the electrical weapon by 920 over the next five years.

And all uniformed response and neighbourhood police officers will be able to get one once they’ve had the training.

It comes after repeated calls for such a move from the Police Federation, which represents rank and file officers – and just days before statistics will reveal just how often Tasers were pointed, and shot, at suspects last year.

Assistant chief constable Terry Woods said: “It is clear that the operational environment is changing and that our frontline staff are more often dealing with people who are prepared to use violence against them and that we see increased unpredictability because of escalating mental health issues.

“We already regularly update our threat and risk assessment to ensure we have the right capability available and our view is that Taser issue will continue to increase to the point where the majority of frontline officers are carrying.

“This is a big uplift and it will take some working out how we can do it, in what time and how much it will cost.

“We are committed to making sure our staff have the training, the resources and the kit to do their job while keeping the people of Lancashire safe.”

Clive Grunshaw, Lancashire’s police and crime commissioner said: “The use of Tasers, together with the number of Taser trained officers and how these are deployed, are all decisions which are based on the operational needs of the force and how best to protect the people who live, work and visit the county.

“Additional funding to help policing in Lancashire is obviously welcome, but any additional investment in the use of Tasers needs to take into account the ongoing investment required, which includes the increased cost of maintenance and training.

“I support the capability for a phased increase in Tasers and number of officers who are trained to use them in appropriate circumstances, based on operational need.

“However this should not be mandatory, but remain a choice for those officers out on our streets keeping the people of Lancashire safe.”

In response to a Freedom of Information request, Lancashire Police said it had 393 Taser-trained officers across several units, including counter-terrorism and unarmed tactical operations, at the end of October, plus 97 firearms officers.

That will be increased, the force said, adding: “The plans are to issue Tasers to uniform response and neighbourhood policing officers of all ranks (constable, sergeant, and inspector).”

She added: “Tasers are potentially lethal weapons, linked to hundreds of deaths in the USA, and we’ve always said that UK police forces needed to restrict their use to highly-trained specialist officers.

“In the past, police officers themselves have expressed concern that they’re being asked to carry these powerful electro-shock weapons after only minimal training – a matter of days compared to months for firearms officers.

“Police officers do a difficult job, and we accept that Tasers can be effective if used by well-trained officers to prevent loss of life or serious injury.

“We would urge Lancashire Constabulary to ensure that only highly-trained specialist officers are given these potentially lethal weapons.”

Rachel Hanley, chairman of the Police Federation’s Lancashire branch, said she believed all officers should be allowed to carry Tasers in order to combat attacks.

She said she “strongly supports the wider rollout of Taser for those frontline officers who wish to carry it”.

She added: “This is a vital step in the right direction to protect our colleagues and communities against those intent on using violence.

“Officers are often left vulnerable whilst out on patrol and often the mere presence of a Taser is enough to deter offenders.

“Sadly, times have changed and those officers need to be properly equipped to deal with those threats.”

John Apter, chairman of the Police Federation of England and Wales has also called for more Tasers to be distributed.Speaking in response to Home Office figures which revealed 178 attacks resulting in a Lancashire officer being injured last year – up from 144 the year before – he said: “The rise in assaults on our officers is completely unacceptable and must never be seen as just part of the job.

“The recent surge of serious, high-profile attacks is a serious concern, and the Federation will continue to push for a wider roll-out of Tasers, supporting all frontline officers who want to carry out in passing the required assessments to do so.

“It is not a nice-to-have device – it is an essential piece of kit, which without doubt has saved the lives of officers and the public.”

Lancashire Police also recorded 384 attacks which didn’t injure an officer in 2018/19, up from 274 the year before, and the Home Office warned the actual number could be higher because some officers don’t report assaults.