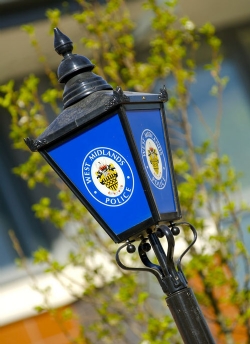 Two men from Birmingham who were responsible for supplying sawn-off shotguns to organised crime groups have been jailed for more than 55 years, after a joint investigation by the West Midlands Regional Organised Crime Unit (ROCU) and the National Crime Agency (NCA).

Mohammed Rafiq Khan, aged 29 from Bordesley Green and Michael Harkin, 54, from Yardley were sourcing the weapons and distributing them to criminal associates across the West Midlands. Khan was also the head of a drug dealing network which distributed class A drugs across the region and eight of his accomplices were also locked up for more than 60 years at Birmingham Crown Court yesterday (Wednesday 1 November).

Investigations found 68 year-old John Spencer Booth, a registered firearms dealer from Derbyshire, converted lawfully held firearms for Harkin and Khan by shortening barrels and removing serial numbers from shotguns. A total of 14 sawn-off shotguns were recovered and more than five kilos of Class A drugs were distributed through the illegal operations.

Harkin and his partner Lucy Wilkie were both arrested last October after officers searched their home in South Yardley and recovered three sawn-off shotguns. A further search conducted at the address of acquaintances Vineeta Kainth and Mark Adkins resulted in the recovery of component parts, including sawn-off barrels and ammunition.

On Monday 16 January 2017, armed officers stopped the vehicle Booth was driving and recovered 10 sawn-off shotguns and 250 cartridges in the boot. A search of Booth's business premises and home address in Ashbourne revealed a workshop and equipment used to shorten shotgun barrels and stocks.

Numerous cut barrels were found, suggesting this had been an on-going criminal enterprise.
Joel Martin was part of Khan's drug dealing network and was arrested in possession of wraps of crack cocaine and heroin. Officers searched his home address and found approximately £15,000 worth of drugs.

Further enquiries led police to Mark Jones who was found with bags of heroin he was storing for Khan; while mother and daughter Anthea and Kareen Bagnall were caught with heroin and crack cocaine after being stopped in a car in Birmingham.

Jones, Kareen and Anthea Bagnall were drug runners responsible for the distribution of Class A substances from Birmingham to outer city locations, known as a County Lines network. More than 100 calls per day were made using Khan's line to drug users in Welshpool, Shrewsbury and Birmingham.

The investigation culminated when Khan was detained at Shrewsbury train station in February 2017. He was found in possession of five mobile phones, over £1,500 in cash and tickets to Dubai.

Detective Inspector James Mahon, from the West Midlands Serious and Organised Crime Unit, said: "This was a complex investigation but has led to significant prison sentences and illegally held guns and drugs being removed from the streets.
"These converted sawn off shotguns had the potential to be extremely dangerous in the wrong hands; while drugs can ruin lives and communities."

Jon Greenwell, from the NCA's Armed Operations Unit added: "Whilst the majority of registered firearms dealers adhere to their licensing arrangements, there are some who are prepared to buy, convert and sell firearms for criminal purposes. Booth was one of these individuals.
"Using his legitimate business as a cover, he actively sought to convert weapons for organised crime groups to make money. He gave no thought to where or how the weapons he converted would be used and in my mind posed a very real risk to the public.

"Anyone who has information or is concerned about illegally held guns or ammunition to contact their local police, or Crimestoppers on 0800 555111".

It comes as the drive to take guns off the streets continues with a two-week national firearms surrender which is being co-ordinated by the National Ballistics Intelligence Service (Nabis) between 13-26 November.

Armed Police Numbers Home Office Police Scotland Welfare Support Programme PFOA WSP NPCC College of Policing Terror Threat Metropolitan Police wellbeing Armed Police West Mids Police Mental Health PTSD welfare Terror attack AFO illegal firearms Firearms Officers Assault on Police PFEW ARV Taser Protect The Protectors
I have recently been medically retired from the police with PTSD following a serious injury on duty a few years ago. I would not be here if it was not for the PFOA - they literally saved my life. In February 2017 I was long-term sick off of work and I was in a very bad place. Whilst I have been unable to continue as a serving officer, I will forever be indebted to the PFOA. I will never be able to repay them for all that they did. All I can say is thank you so much from me and my family.
PFOA assisted by offering counselling/coaching support to officer’s family. A respite break was granted to allow the officer and his family to get away and spend some valuable time together as a family unit.
The PFOA purchased a new cross trainer and have loaned this to the officer to enable him to remain active and hopefully return to Ops.
PFOA arranges support for the officers involved prior to the Inquest and after by way of a respite breaks and NLP Coaching or Counselling.
I would like to personally thank the PFOA for the gifts we received for our daughter. The timing could not have been better. the week the gifts arrived, she had lost her hair and was due to go back to hospital for her next round of chemotherapy treatment which she was not looking forward to. Opening the parcel put a big smile back on her face for two reasons. firstly, because you had chosen as gifts exactly what she would have chosen for herself. But secondly and more importantly, because she realised other people ere also thinking of her and willing her to get better. People she had never met.
Thank you so much for the shopping vouchers, they will come in very handy. Thank you for helping my daddy to be himself again. Keep helping police officers because some people don’t understand how hard it can be and they are doing a great thing.
This act of kindness was greatly appreciated by us both at what is a very difficult time for our family.
© 2017 PFOA - Police Firearms Officers Association
Head Office: Chatteris Police Station, 18 East Park Street, Chatteris,
Cambridgeshire PE16 6LD - Tel: 01354 697 890
Email: [email protected]