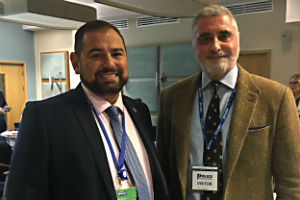 Equality Liaison Officers (ELOs) have been given a lesson in maintaining morale and mental resilience from a former British Army officer.

Lt Col Richard Dorney MBE addressed Police Federation delegates in Leatherhead on the second day of the Equality Liaison Officers Seminar. He touched on his 38 year military career including the trauma he experienced over the death of a colleague in Northern Ireland.

He said: “At the time I didn’t want to deal with it so I parked it and focused on the mission. It affected me later. I knew I wasn’t right but I would never have put my hand up and say so.”

However he went on to lead Trauma Risk Management (TRiM) training on behalf of the army and now speaks on the topic in retirement. He posed the question ‘what is resilience?’ and defined it as the ability to cope in the face of setbacks and difficulties.

Coping mechanisms were discussed, including the need to talk through problems with a trusted colleague, the importance of rest and sleep, setting small achievable goals and the value of maintaining a positive self-image.

Mr Dorney touched on the findings of the Federation’s Demand, Capacity and Welfare Survey, which highlight the prevalence of sickness, presenteeism, leaveism and low morale. He also spoke about ‘burnout’ – a state of emotional, mental and physical exhaustion caused by excessive and prolonged stress. This is very relevant given the state of modern policing with increased workloads and reduced numbers of officers.
He added: “Self-awareness is the key.

It is important to know when your mood is becoming low and to know the triggers. Speak to someone you know and trust – just getting it off your chest is really powerful. The key is noticing the effect of your behaviour and actions on other people.”

Earlier in the day, the seminar heard from Emma Hawksworth of law firm Slater and Gordon on disability discrimination, focusing on a case where the Government Legal Service (GLS) were taken to an employment tribunal over multiple choice questions in their applications process, which were found to disadvantage an applicant with Asperger Syndrome.

Delegates also heard from Slater and Gordon about best practice when applying to the Police Medical Appeal Board (PMAB) on behalf of an officer. PFEW national equality lead Hayley Aley also briefed the meeting on the forthcoming Federation elections and the rationale for being representative of the membership locally and nationally.

The seminar previously received a talk on suicide prevention.

wellbeing welfare PTSD IPCC ARV Home Office West Mids Police Terror Threat Firearms Officers Mental Health illegal firearms Terror attack Armed Police Taser Police Scotland Assault on Police Metropolitan Police PFOA Armed Police Numbers WSP Protect The Protectors Welfare Support Programme AFO PFEW PSNI
I have recently been medically retired from the police with PTSD following a serious injury on duty a few years ago. I would not be here if it was not for the PFOA - they literally saved my life. In February 2017 I was long-term sick off of work and I was in a very bad place. Whilst I have been unable to continue as a serving officer, I will forever be indebted to the PFOA. I will never be able to repay them for all that they did. All I can say is thank you so much from me and my family.
PFOA assisted by offering counselling/coaching support to officer’s family. A respite break was granted to allow the officer and his family to get away and spend some valuable time together as a family unit.
The PFOA purchased a new cross trainer and have loaned this to the officer to enable him to remain active and hopefully return to Ops.
PFOA arranges support for the officers involved prior to the Inquest and after by way of a respite breaks and NLP Coaching or Counselling.
I would like to personally thank the PFOA for the gifts we received for our daughter. The timing could not have been better. the week the gifts arrived, she had lost her hair and was due to go back to hospital for her next round of chemotherapy treatment which she was not looking forward to. Opening the parcel put a big smile back on her face for two reasons. firstly, because you had chosen as gifts exactly what she would have chosen for herself. But secondly and more importantly, because she realised other people ere also thinking of her and willing her to get better. People she had never met.
Thank you so much for the shopping vouchers, they will come in very handy. Thank you for helping my daddy to be himself again. Keep helping police officers because some people don’t understand how hard it can be and they are doing a great thing.
This act of kindness was greatly appreciated by us both at what is a very difficult time for our family.
© 2017 PFOA - Police Firearms Officers Association
Head Office: Chatteris Police Station, 18 East Park Street, Chatteris,
Cambridgeshire PE16 6LD - Tel: 01354 697 890
Email: info@pfoa.co.uk