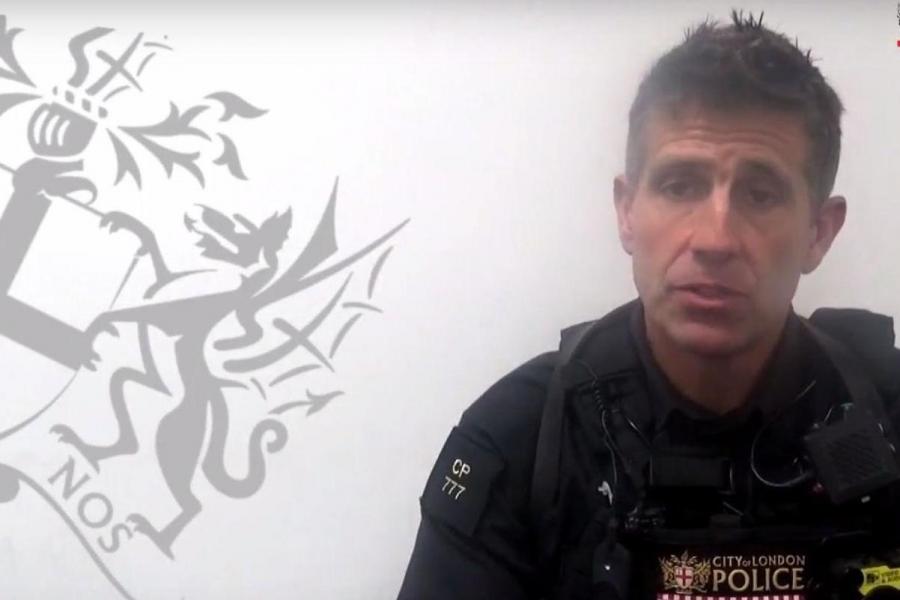 A police officer today told of the  terrifying moment ammonia was thrown in his face as he tried to arrest an erratic driver, saying: “I thought I’d never see my children again.”

Pc Simon Ashton was blinded when he was squirted with the corrosive liquid as he grappled with the motorist.

The dog handler with the City of London Police said he feared for his life as he fought with Timmy Sullivan, 30, who was yesterday jailed for more than seven years.

Sullivan was stopped after being spotted just before 11pm on April 15 skipping red lights and speeding on the wrong side of the road in Fleet Street.

Fearing a possible terror attack, Pc Ashton began pursuing the vehicle with a colleague, eventually cornering it on Goswell Road in Clerkenwell.  He said Sullivan was “acting weirdly, distant … in my opinion he was on some form of drugs.
“He then started to make a reach for the side door compartment... I believed he was reaching for a firearm... I was shouting out to fellow officers ‘I believe he’s got a gun’.” His colleagues used pepper spray but Sullivan continued to struggle.

“I was fighting at that time I believed for my life. He managed to get an arm free at which point I had a liquid thrown in my face. It covered the whole of my face and I swallowed some of it. I was immediately incapacitated.

"My throat was burning, I couldn’t breathe. I was immediately blind. I dropped to the floor in the middle of the junction, now on all fours and totally incapacitated. I believed I had acid thrown in my face. It was extremely painful.

“My worries were that he was getting out and he was going to finish me off.” It was four weeks before Pc Ashton’s sight fully returned. Prosecutor Adam King told Inner London crown court how a recent spate of acid attacks had caused widespread public alarm.

The court heard Sullivan was jailed indefinitely for the public’s protection in 2006 over the killing of 17-year-old student Daniel Pollen.

Sullivan, of Lewisham, pleaded guilty to attempting  to cause grievous bodily harm with intent, dangerous driving, two charges of possession of offensive weapons, handling stolen goods, driving while uninsured and disqualified, and assaulting a police officer. He was recalled to prison after the attack under the terms of his previous imprisonment.

PSNI wellbeing Firearms Officers AFO Terror attack PTSD NPCC illegal firearms Welfare Support Programme PFOA Police Scotland welfare ARV Armed Police Taser Assault on Police Metropolitan Police WSP Terror Threat PFEW Protect The Protectors West Mids Police Armed Police Numbers Home Office Mental Health
I have recently been medically retired from the police with PTSD following a serious injury on duty a few years ago. I would not be here if it was not for the PFOA - they literally saved my life. In February 2017 I was long-term sick off of work and I was in a very bad place. Whilst I have been unable to continue as a serving officer, I will forever be indebted to the PFOA. I will never be able to repay them for all that they did. All I can say is thank you so much from me and my family.
PFOA assisted by offering counselling/coaching support to officer’s family. A respite break was granted to allow the officer and his family to get away and spend some valuable time together as a family unit.
The PFOA purchased a new cross trainer and have loaned this to the officer to enable him to remain active and hopefully return to Ops.
PFOA arranges support for the officers involved prior to the Inquest and after by way of a respite breaks and NLP Coaching or Counselling.
I would like to personally thank the PFOA for the gifts we received for our daughter. The timing could not have been better. the week the gifts arrived, she had lost her hair and was due to go back to hospital for her next round of chemotherapy treatment which she was not looking forward to. Opening the parcel put a big smile back on her face for two reasons. firstly, because you had chosen as gifts exactly what she would have chosen for herself. But secondly and more importantly, because she realised other people ere also thinking of her and willing her to get better. People she had never met.
Thank you so much for the shopping vouchers, they will come in very handy. Thank you for helping my daddy to be himself again. Keep helping police officers because some people don’t understand how hard it can be and they are doing a great thing.
This act of kindness was greatly appreciated by us both at what is a very difficult time for our family.
© 2017 PFOA - Police Firearms Officers Association
Head Office: Chatteris Police Station, 18 East Park Street, Chatteris,
Cambridgeshire PE16 6LD - Tel: 01354 697 890
Email: [email protected]