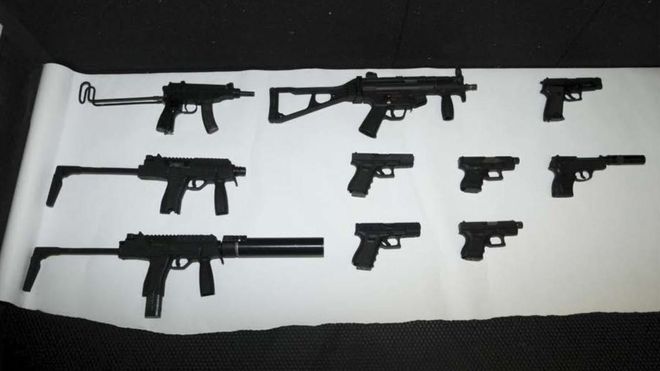 Nine men have pleaded guilty to a variety of charges linked to the most sophisticated organised crime group encountered yet by Police Scotland, according to prosecutors.

The High Court in Glasgow was told that the firepower at the disposal of the group was "unprecedented in terms of the history of organised crime in Scotland".
At the heart of its activities was the importation of vast quantities of cocaine, and the trafficking of illegal firearms in great quantity.

It is thought to have trafficked a tonne of narcotics a year - the bulk coming into Scotland.
A frightening cache of firearms seized in one raid at a garage in Whittinghame Court, in the Anniesland area of Glasgow, was estimated to have a resale value of almost £40,000.

The gang went to great lengths to cover their tracks and remain at large.
To those ends, its members were not afraid to use a terrifying level of violence - like that meted out to drug dealer Robert Allan who was beaten and tortured after getting on the wrong side of the gang.

The court heard details of how the gang operated and the equipment and methods it deployed.
The group used ingenious techniques to hide guns in concealed compartments within a fleet of cars - and within the ceilings of work premises they used.

A concealed compartment in the Black Honda CRV car recovered in Anniesland was found behind the rear bumper.
A secret void had been created within the car's body - and hidden inside were 11 assorted firearms including Glock and Berreta handguns and sub-machine guns.

Another vehicle linked to the gang was seized by police who subjected it to a detailed examination.
A sophisticated concealment was found under the floor of the boot.
The hideaway was operated by a remote control "which triggered a hydraulic arm which opened a metal door covering the spare wheel well".
The radio receiver to activate the unit was wired behind the rear offside light tail light, the High Court in Glasgow was told.
According to police, the compartment was "very effective" and would not have been discovered under a general search.

The organised gang used a vast array of equipment to keep ahead of the police.
The level of anti-surveillance technology and know-how eventually uncovered was unseen in recent criminal investigations north of the border.

Officers recovered listening devices and mobile phone jammers among a horde of equipment of the type only used by the police and security services.
On several occasions police were convinced their covert surveillance had been detected by the group.

Group members took to meeting in discreet locations such as lock-up garages and even a cemetery.
A specialist Orion detector device used to detect electronic surveillance, costing £25,000, was among the haul eventually gathered by police.

Another piece of seized equipment used to detect illegal transmissions was said to have a retail value of £39,600
he gang used a fleet of cars, often stolen and often high-powered to hide their weapons and illegal activities.
Cars including Audis and BMWs were registered using stolen documents and false addresses.
Up to 16 vehicles were used - each found with significant modifications to hide weapons in.

The organised group also worked from a network of rented premises, often industrial units in out-of-the-way locations, or from unassuming lock-ups in Glasgow.

In all cases, the premises were hired using false names and documents to cover their tracks.

So brazen were the group, they even obtained a full rates rebate from the local authority for a unit at Muirhall Road in Larbert, using fake tenant details.
The group set aside a separate black Nokia phone at several of the premises to be used as a "fake tenant" phone.
Invariably, false addresses were linked to the G21 and G31 postcode areas where a number of the group lived.

The violence meted out to Robert Allan in March 2015 illustrated the lengths the group would go to maintain their operations.
Mr Allan was a drugs dealer who went back on an agreement with the group in 2013.

Owing £30,000, he was tracked down to a village near Barnsley, South Yorkshire, in 2015 where he was beaten and abducted.
He was chained up and driven 240 miles back to Scotland where he was taken to a remote industrial unit in Fauldhouse, West Lothian, which was used by one of the group, David Sell.
There, he had his leg broken with a sledgehammer and was forced to wash himself down before being sprayed with bleach.

He was driven to a remote spot outside East Kilbride, bundled outside and forced to the floor and shot in both knees.
It was his eventual testimony that led police to carry out a number of raids and searches against the serious and organised crime group.
A gun recovered in the Anniesland raid was linked back to his abduction and beating.
The group used weapons to enforce their own narcotics interests while also supplying a demand for firearms from other crime gangs.
Their activities were recorded over the past four years - and their influence was considered to stretch overseas.
One former police officer who gave expert analysis of the cache of weapons and money said the concealment methods used by the group suggested they worked across borders.

Kenneth Simpson, a former police officer with extensive experience in investigating drug trafficking, said the amount of cash and firearms recovered was "indicative of an international operation".
The weaponry found in the raid in Anniesland included a M75 grenade containing 3,000 steel balls and 36 grams of plastic explosive. 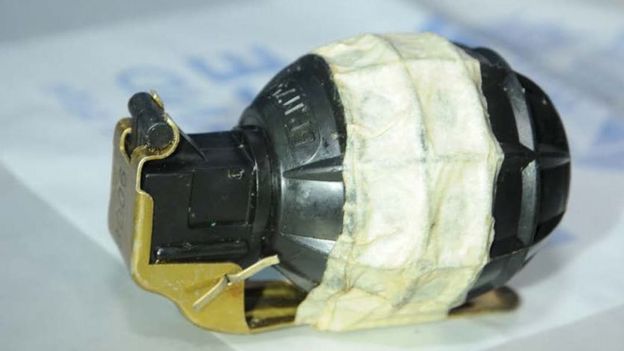 According to prosecutors, it was designed to cause death or serious injury to any target within 25 metres.
A Glock Austrian self-loading pistol designed to fire 9mm Luger cartridges was linked directly to one of the accused, Steven McArdle.

The contraptions were painstakingly engineered to keep ill-gotten gains free of detection.
As well as the cache of electronic surveillance devices, police also recovered a BT Openreach worker's uniform and a BT worker's ID badge.
Investigations established that Gerry Middleton was a retired BT worker and had no knowledge of anyone using the badge, the court was told.
Those responsible for security at BT confirmed to police that no-one had been given authority to use the badge.It was not said in court how the uniform was used.

Similarly, police recovered a postman's uniform which, prosecutors said, demonstrated the "ability of the group to intercept mail".

Judge Lord Beckett remanded all nine men in custody and deferred sentence until next month.

Firearms Officers illegal firearms PFEW Assault on Police Terror Threat WSP Home Office Armed Police wellbeing IPCC College of Policing ARV Terror attack West Mids Police AFO PFOA Metropolitan Police Armed Police Numbers PSNI welfare Police Scotland Mental Health PTSD Welfare Support Programme Taser
I have recently been medically retired from the police with PTSD following a serious injury on duty a few years ago. I would not be here if it was not for the PFOA - they literally saved my life. In February 2017 I was long-term sick off of work and I was in a very bad place. Whilst I have been unable to continue as a serving officer, I will forever be indebted to the PFOA. I will never be able to repay them for all that they did. All I can say is thank you so much from me and my family.
PFOA assisted by offering counselling/coaching support to officer’s family. A respite break was granted to allow the officer and his family to get away and spend some valuable time together as a family unit.
The PFOA purchased a new cross trainer and have loaned this to the officer to enable him to remain active and hopefully return to Ops.
PFOA arranges support for the officers involved prior to the Inquest and after by way of a respite breaks and NLP Coaching or Counselling.
I would like to personally thank the PFOA for the gifts we received for our daughter. The timing could not have been better. the week the gifts arrived, she had lost her hair and was due to go back to hospital for her next round of chemotherapy treatment which she was not looking forward to. Opening the parcel put a big smile back on her face for two reasons. firstly, because you had chosen as gifts exactly what she would have chosen for herself. But secondly and more importantly, because she realised other people ere also thinking of her and willing her to get better. People she had never met.
Thank you so much for the shopping vouchers, they will come in very handy. Thank you for helping my daddy to be himself again. Keep helping police officers because some people don’t understand how hard it can be and they are doing a great thing.
This act of kindness was greatly appreciated by us both at what is a very difficult time for our family.
© 2017 PFOA - Police Firearms Officers Association
Head Office: Chatteris Police Station, 18 East Park Street, Chatteris,
Cambridgeshire PE16 6LD - Tel: 01354 697 890
Email: [email protected]