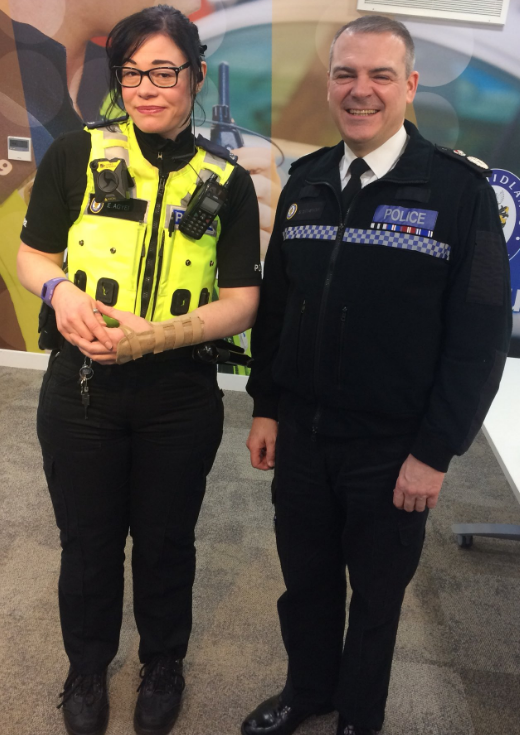 One of the country’s top cops is personally taking steps to highlight the impact of officers or police staff being assaulted or abused on our streets.

Two officers or police staff report being assaulted or racially or verbally abused every day in the West Midlands.

Between April and December 2017, 669 assaults on West Midlands officers and staff were recorded. As a result, 356 days were lost as the brave bobbies recovered from their injuries with a cost equivalent to around £65,000 in sick pay. And the problem is growing.

PC Emma Agyei was assaulted in May 2017 after being called to a domestic incident on Chapel Street, Bradley. Footage from her body-cam shows the moment she is forced to the floor by a 24-year-old man who beats her and rips out a large chunk of her hair.
Emma’s attacker pleaded guilty to assault and was given a 12 weeks suspended sentence.

Chief Constable Dave Thompson, said: “I am stepping up to highlight the impact of assaults on our communities. Officers, PCSOs and staff are often the first and last line of defence.

“Our officers will always do the right thing and routinely put themselves in harm’s way to protect the public, but we need to bring to justice criminals who think that it is okay to abuse and hit out.

“Time off recovering from a senseless attack is time taken away from the very communities that need them policing their streets and protecting them."
From 2018 cases where cop attackers are brought before the courts will include a personal statement from the Chief.

In the document - known as an impact statement - Dave Thompson will personally outline to the magistrate or judge and jury the effect the attack has had on the force, and its wider implications for the people of the region by having one of their protectors off patrol because of their injuries.

The move comes with the backing of the Crown Prosecution Service (CPS) who are the independent prosecutors in criminal cases in England and Wales. Their job is to make sure the right person is prosecuted for the right offence and offenders are brought to justice.

The personal statement, written by the Chief, will be used during sentencing and allows the judge to take into consideration the impact the assault has had on the force, the officer’s family and the public. It will be used in conjunction with statements from the victim.
“When it comes to prosecuting suspects, we have been working closely with CPS in our region." said Dave Thompson.

“We will be making sure that for each prosecution of an assault on one of our officers or staff, the court understands the impact this has on us, our families, our workplace and the policing of the West Midlands."

In the last three years, 2,336 assaults on police officers have been recorded. Of these, 89 were police community support officers and 131 were custody staff.

“The figures are unacceptable and we must work harder as a force to protect our officers and staff.

“No officer or member of staff should come to work and accept that being assaulted or abused is simply part of the job.

“As a victim of crime, they will be offered the same service any member of the public would expect. As an employer, we’re doing the right thing and adding in an additional layer of support."

Dave Thompson became Chief Constable in January 2016 and pledged to do more on staff wellbeing. As well as introducing more staff welfare support services, he has backed the Police Federation’s Protect the Protectors campaign and overseen the introduction of spit guards, body worn video and double-shot Taser to help with officer safety.
He added: “All too often police officers and staff are subjected to assaults and threats. While the severity of such attacks changes, the impact upon society does not. It is never acceptable to assume that assaults upon police officers and staff should be tolerated, they are not ‘part of the job’."

"The police protect the public, it is therefore important we protect our officers, PCSOs and staff too.

"Officers and staff should not have to put up with violence and assaults whilst keeping the public safe.

"West Midlands Police takes assaults against its staff and officers incredibly seriously. The force will do all in its power to bring those who commit such crimes to justice."

THE IMPORTANCE OF SUPPORTING MENTAL HEALTH

PSNI PTSD Police Scotland Welfare Support Programme Armed Police NPCC West Mids Police IPCC Home Office ARV Taser illegal firearms Armed Police Numbers wellbeing Metropolitan Police Assault on Police Terror attack Firearms Officers PFEW Terror Threat WSP welfare AFO Mental Health PFOA
I have recently been medically retired from the police with PTSD following a serious injury on duty a few years ago. I would not be here if it was not for the PFOA - they literally saved my life. In February 2017 I was long-term sick off of work and I was in a very bad place. Whilst I have been unable to continue as a serving officer, I will forever be indebted to the PFOA. I will never be able to repay them for all that they did. All I can say is thank you so much from me and my family.
PFOA assisted by offering counselling/coaching support to officer’s family. A respite break was granted to allow the officer and his family to get away and spend some valuable time together as a family unit.
The PFOA purchased a new cross trainer and have loaned this to the officer to enable him to remain active and hopefully return to Ops.
PFOA arranges support for the officers involved prior to the Inquest and after by way of a respite breaks and NLP Coaching or Counselling.
I would like to personally thank the PFOA for the gifts we received for our daughter. The timing could not have been better. the week the gifts arrived, she had lost her hair and was due to go back to hospital for her next round of chemotherapy treatment which she was not looking forward to. Opening the parcel put a big smile back on her face for two reasons. firstly, because you had chosen as gifts exactly what she would have chosen for herself. But secondly and more importantly, because she realised other people ere also thinking of her and willing her to get better. People she had never met.
Thank you so much for the shopping vouchers, they will come in very handy. Thank you for helping my daddy to be himself again. Keep helping police officers because some people don’t understand how hard it can be and they are doing a great thing.
This act of kindness was greatly appreciated by us both at what is a very difficult time for our family.
© 2017 PFOA - Police Firearms Officers Association
Head Office: Chatteris Police Station, 18 East Park Street, Chatteris,
Cambridgeshire PE16 6LD - Tel: 01354 697 890
Email: [email protected]