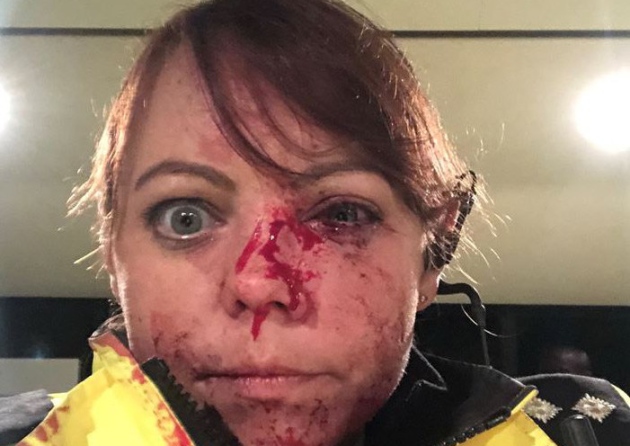 A police officer has vowed to “continue running towards the danger” despite receiving these horrific injuries in a brutal attack while on duty in Norwich city centre.

Her attacker Shannon Lovelock was today starting a four-year jail term after he caused injury to three officers, including Inspector Laura Symonds, who suffered a fractured eye socket and broken nose in the incident.

Inspector Symonds, who suffered permanent damage to her vision, spoke exclusively to this paper about the attack saying that while she vowed to continue as an officer, it had impacted both her and her friends and family.

The officer of 11 years said: “They’ve questioned whether the job is worth it. I’ve reassured them it’s my passion and that every day my instinct is to run towards the danger when others are running away.

“My colleagues do it and I want to lead by example and show them can still do it.”

Inspector Symonds had been on public order patrol in the King Street area of the city when she and a colleague, Sergeant Graham White, were attacked.

Lovelock, 35, of Barnards Yard, Norwich, appeared at Norwich Crown Court on Friday (September 11) when he pleaded guilty to causing grievous bodily harm (GBH) with intent to Insp Symonds, an offence of assault occasioning actual bodily harm (ABH) to Sgt White and assault of an emergency officer in relation to biting another officer in the same incident.

Lori Tucker, prosecuting, said police became aware of Lovelock who was “walking in the middle to the road with his trouser leg rolled up”.

Insp Symonds and Sgt White went to speak to Lovelock who told officers he had been robbed and his girlfriend, who also had money stolen, was still in the flat.

Ms Tucker said Lovelock was asked for his name but gave false details and walked away, but was followed by the officers.

Sgt White tried to take hold of his arm but Lovelock became aggressive and punched the officer in the face, knocking him to the floor.

Insp Symonds came to assist but was also punched “causing her to fall on the pavement and hit her head”.

Sgt White arrested Lovelock near to the Novi Sad Bridge, with the help of other officers, despite being hit on further occasions by Lovelock who also bit one of the other PCs who had come to assist.

Sentencing, Judge Anthony Bate said: “This was a serious incident in Norwich city centre where three officers were assaulted at your hands in the course of their duties.”

Judge Bate said the officers “rightly expect and are entitled to the protection of these courts”,

Lovelock was told if he had intended to do Insp Symonds really serious harm “when you struck out hit her the sentence would’ve been much longer”.

Judge Bate praised the resilience of the officers attacked by Lovelock and noted how the victims said they had been well supported by other officers at Norfolk Constabulary right up to chief constable Simon Bailey.

Insp Symonds, who started as a PC in Norwich, but who has spent the last three years in the force control room before becoming the local policing commander for Diss, added: “It was so quick, just extremely quick. I pride myself on being able to communicate but there was nothing with him - it was very sudden.

“I went back, hit my head on the pavement with a bit of force. I was properly dazzled. I think I got knocked out. I sat up and could see my colleague running after him.

“I got up and all I could feel was blood running everywhere. I called for emergency backup and got lots of my colleagues on route to help.”

Despite the horrific injury she suffered, Insp Symonds, who won the Student Officer of the Year category at the Jane’s Police Review Gala in 2015, said she still wants to continue doing the job she loves.

She said: “My colleagues do it and I want to lead by example and show them can still do it.”

Ian James, mitigating, said Lovelock has a “history of some mental disorder” and told how the “sudden transformation” in his behaviour followed initially being treated as a complainant to being a suspect.

illegal firearms Terror attack PFOA Home Office College of Policing Protect The Protectors Mental Health Welfare Support Programme ARV PFEW Terror Threat Firearms Officers Assault on Police wellbeing WSP welfare West Mids Police Armed Police Numbers Metropolitan Police PTSD NPCC Armed Police Taser AFO Police Scotland
I have recently been medically retired from the police with PTSD following a serious injury on duty a few years ago. I would not be here if it was not for the PFOA - they literally saved my life. In February 2017 I was long-term sick off of work and I was in a very bad place. Whilst I have been unable to continue as a serving officer, I will forever be indebted to the PFOA. I will never be able to repay them for all that they did. All I can say is thank you so much from me and my family.
PFOA assisted by offering counselling/coaching support to officer’s family. A respite break was granted to allow the officer and his family to get away and spend some valuable time together as a family unit.
The PFOA purchased a new cross trainer and have loaned this to the officer to enable him to remain active and hopefully return to Ops.
PFOA arranges support for the officers involved prior to the Inquest and after by way of a respite breaks and NLP Coaching or Counselling.
I would like to personally thank the PFOA for the gifts we received for our daughter. The timing could not have been better. the week the gifts arrived, she had lost her hair and was due to go back to hospital for her next round of chemotherapy treatment which she was not looking forward to. Opening the parcel put a big smile back on her face for two reasons. firstly, because you had chosen as gifts exactly what she would have chosen for herself. But secondly and more importantly, because she realised other people ere also thinking of her and willing her to get better. People she had never met.
Thank you so much for the shopping vouchers, they will come in very handy. Thank you for helping my daddy to be himself again. Keep helping police officers because some people don’t understand how hard it can be and they are doing a great thing.
This act of kindness was greatly appreciated by us both at what is a very difficult time for our family.
© 2017 PFOA - Police Firearms Officers Association
Head Office: Chatteris Police Station, 18 East Park Street, Chatteris,
Cambridgeshire PE16 6LD - Tel: 01354 697 890
Email: info@pfoa.co.uk