Between 2015 and 2017 more than 20 police officers took their own life each year. That’s almost two a month. Something needs to change.

Research has shown that emergency services workers are twice as likely than the public to identify problems at work as the main cause of their mental health problems, but they are also significantly less likely to seek help.

We need, once and for all, to put the idea that talking about emotional or mental health is a sign of weakness behind us. Police officers are dying because they aren’t asking for or getting help.

They don’t need to “Man Up” they need to speak out. With a quarter of emergency service workers admitting to thinking about taking their own lives, this campaign encourages officers to take each others mental wellbeing as seriously as they take each others physical safety, and and questions whether we are too dismissive of colleague who may be showing signs of mental health issues - something that has potentially fatal consequences.

When you hear 'Man Up', think 'Man Down' offer help.

Here are some other organisations who may be able to help. 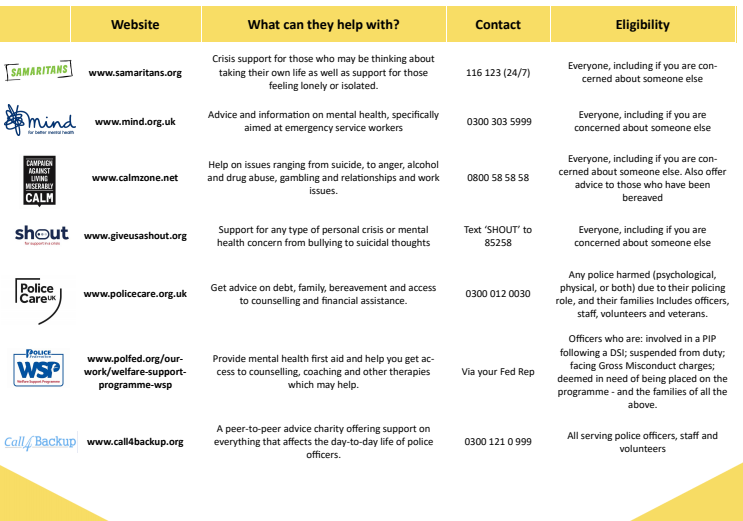 How many times have you heard a colleague say that?

We all know that colleagues will have our backs when it comes to physical safety – that heart stopping moment when a ‘Code Zero’ goes out is not quickly forgotten – but can the same honestly be said when it comes to our mental wellbeing?

Sometimes, between the banter, wanting to avoid looking ‘weak’ and the pressure to move onto the next job, mental health takes a back seat. We say we are “fine,” but know we are not. We accept it when a colleague says they are “fine,” even when we know they are not. And the consequences can be fatal.

The last official statistics suggest that every month, up to 2 police officers take their own lives. I hate to think that when these officers were at their most vulnerable and needed help, someone told them to “man up” – but we must accept that, in some cases, it may have happened.

That is why, this year, the Fed are launching a new campaign to help change the tone of the conversation on mental health and suicide - and make officers of all ranks realise that telling someone to “man up,” may lead to a man down.

As police officers we deal with trauma, danger and grief day in day out. We see the very worst of humanity, but are expected to leave it behind at the end of a shift and return to ‘normal’ life. The consequences of the current approach are clear.

One report last year estimated that 1 in 5 officers and police staff in the UK have symptoms consistent with either post traumatic stress disorder or what is known as “complex PTSD” – but two thirds of those suffering are unaware of their condition.

Another highlighted that 25% of those working for the emergency services had thought about taking their own lives- and 5% had attempted it.

There is still a stigma attached to mental illness in policing- and even more so to suicide: but we can all change that. I, for one, would rather have colleagues who know they can ask for help if they need it (and as soon as they need it) rather than bottling everything up until they can’t take anymore.

To make this happen we need – at every level - to provide colleagues with the right support, resources and treatment. I’m currently exploring the best examples from around the world of peer-to-peer mental health training and support, as well as apps and online resources which could help frontline officers.

Some forces are taking positive steps towards the mental health wellbeing of our officers too, but this is nowhere near enough and more needs to be done. Our officers are mandated to complete physical officer safety training every year in order to protect themselves and the members of public, but what about the neck up, and strengthening our mental health capacity the same way?

One of our own taking their own life is the part of mental health no-one quite knows how to deal with. That needs to change. We need to identify those at risk and offer unfailing support but, should the worst happen, forces need to act swiftly and effectively to help grieving colleagues. At the moment, the response is patchy at best. Its something that will be a key focus of the Fed’s wellbeing team this year.

In the meantime, the next time you hear (or are tempted to use) the phrase “man up”, think “man down!” and respond as you would to a physical injury. It might just save someone’s life.

Metropolitan Police welfare illegal firearms College of Policing wellbeing NPCC PTSD Assault on Police Firearms Officers Home Office ARV Taser PFOA Protect The Protectors PFEW Armed Police Numbers Welfare Support Programme WSP Terror attack AFO Terror Threat West Mids Police Police Scotland Mental Health Armed Police
I have recently been medically retired from the police with PTSD following a serious injury on duty a few years ago. I would not be here if it was not for the PFOA - they literally saved my life. In February 2017 I was long-term sick off of work and I was in a very bad place. Whilst I have been unable to continue as a serving officer, I will forever be indebted to the PFOA. I will never be able to repay them for all that they did. All I can say is thank you so much from me and my family.
PFOA assisted by offering counselling/coaching support to officer’s family. A respite break was granted to allow the officer and his family to get away and spend some valuable time together as a family unit.
The PFOA purchased a new cross trainer and have loaned this to the officer to enable him to remain active and hopefully return to Ops.
PFOA arranges support for the officers involved prior to the Inquest and after by way of a respite breaks and NLP Coaching or Counselling.
I would like to personally thank the PFOA for the gifts we received for our daughter. The timing could not have been better. the week the gifts arrived, she had lost her hair and was due to go back to hospital for her next round of chemotherapy treatment which she was not looking forward to. Opening the parcel put a big smile back on her face for two reasons. firstly, because you had chosen as gifts exactly what she would have chosen for herself. But secondly and more importantly, because she realised other people ere also thinking of her and willing her to get better. People she had never met.
Thank you so much for the shopping vouchers, they will come in very handy. Thank you for helping my daddy to be himself again. Keep helping police officers because some people don’t understand how hard it can be and they are doing a great thing.
This act of kindness was greatly appreciated by us both at what is a very difficult time for our family.
© 2017 PFOA - Police Firearms Officers Association
Head Office: Chatteris Police Station, 18 East Park Street, Chatteris,
Cambridgeshire PE16 6LD - Tel: 01354 697 890
Email: info@pfoa.co.uk