Gun seized in Merseyside is 'most criminally used firearm in Britain' 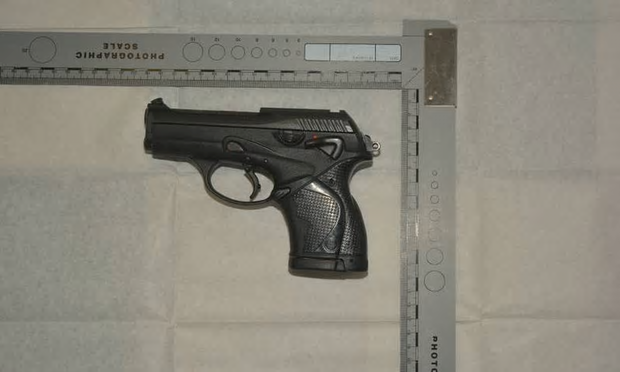 A gun seized by armed police after a shooting in Merseyside has been described as “the most criminally used firearm in Britain”.

The Beretta 9000S self-loading pistol has been used in 19 shootings in the past seven years, lawyers prosecuting a case in Liverpool revealed.

Earlier this year, another court heard the gun was linked to more firearms incidents than any other known weapon in the UK.

The gun was found during a raid by officers investigating an incident in Kirkby in which a gunman fired at a vehicle in a suspected targeted attack.

It was stashed behind boxed off pipes in a bathroom at the home of 24-year-old Adam Bigley.

There is no evidence the weapon was used in the Kirkby shooting.

Bigley admitted possession of a prohibited firearm and ammunition without a firearm certificate and was jailed for six years and nine months on Thursday.

His DNA, along with that of at least three others, was found on the safety catch of the weapon.

A magazine was attached - containing four factory-loaded 9mm live rounds - and the serial number had been erased.

Andrew Alty, defending, cautioned that Bigley was being sentenced for his possession of the gun and not for its historical use.

“That is nothing to do with him,” he said.

“Both his parents were spoken to, he lives in their house, and both said they suspected he came back with it the day before because he came back with a bag. His intention was to hand the weapon back to the person who originally gave it to him. He only had possession of it for one day.”
Judge Norman Wright said gun crime in Liverpool was extremely concerning.

“It is disquieting to know that this particular firearm had been used on 19 previous occasions,” he said.

“You of course will know that firearms, particularly pistols of this sort, are extremely highly valued in criminal organisations.

“They are not something that is just freely passed around. Being so valuable, only extremely trusted people are asked to mind or hold these sort of weapons. The conclusion I draw in this case is you were someone who was highly trusted by the owners or principal users of this firearm; that is why it was given to you.”

Speaking after the sentencing, DI Elaine Coulter said she hoped the sentence sent a message that “possessing firearms of any type carries huge risks and is simply not worth it.”

Police Scotland Assault on Police illegal firearms Terror Threat PTSD Armed Police Numbers Taser Firearms Officers Mental Health NPCC Terror attack PFEW Home Office Armed Police West Mids Police Welfare Support Programme wellbeing College of Policing ARV PFOA Metropolitan Police AFO WSP welfare Protect The Protectors
I have recently been medically retired from the police with PTSD following a serious injury on duty a few years ago. I would not be here if it was not for the PFOA - they literally saved my life. In February 2017 I was long-term sick off of work and I was in a very bad place. Whilst I have been unable to continue as a serving officer, I will forever be indebted to the PFOA. I will never be able to repay them for all that they did. All I can say is thank you so much from me and my family.
PFOA assisted by offering counselling/coaching support to officer’s family. A respite break was granted to allow the officer and his family to get away and spend some valuable time together as a family unit.
The PFOA purchased a new cross trainer and have loaned this to the officer to enable him to remain active and hopefully return to Ops.
PFOA arranges support for the officers involved prior to the Inquest and after by way of a respite breaks and NLP Coaching or Counselling.
I would like to personally thank the PFOA for the gifts we received for our daughter. The timing could not have been better. the week the gifts arrived, she had lost her hair and was due to go back to hospital for her next round of chemotherapy treatment which she was not looking forward to. Opening the parcel put a big smile back on her face for two reasons. firstly, because you had chosen as gifts exactly what she would have chosen for herself. But secondly and more importantly, because she realised other people ere also thinking of her and willing her to get better. People she had never met.
Thank you so much for the shopping vouchers, they will come in very handy. Thank you for helping my daddy to be himself again. Keep helping police officers because some people don’t understand how hard it can be and they are doing a great thing.
This act of kindness was greatly appreciated by us both at what is a very difficult time for our family.
© 2017 PFOA - Police Firearms Officers Association
Head Office: Chatteris Police Station, 18 East Park Street, Chatteris,
Cambridgeshire PE16 6LD - Tel: 01354 697 890
Email: [email protected]