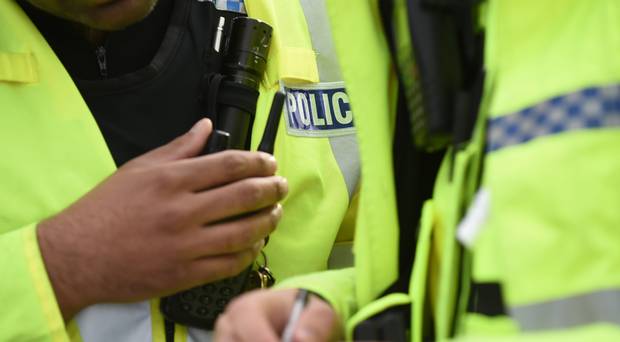 A loud bang was heard around 2am on Wednesday after a missile struck a landrover in west Belfast.

A grenade was thrown at a police land rover in West Belfast in what has been described as an attempt to kill officers.

PSNI Chief Superintendent Jonathan Roberts said a police land rover was on a routine patrol when it was struck by an object before a loud bang was heard.

No injuries have been reported.

“A loud bang was then heard and the police land rover made its way to a place of safety,” he said.

“Thankfully, none of the officers inside the vehicle were injured and no damage was noted to the land rover.

“A police operation was immediately implemented to ensure the safety of everyone in the area and that operation is ongoing at present.

“The remnants of a suspected grenade have been recovered and taken away for forensic testing.

“Further searches are being conducted this morning to ensure there are no other devices present which could endanger members of the public.”

Mr Roberts said the incident was “undoubtedly an attempt to kill or injure police officers”.

“This despicable act must be condemned by all,” he said.

“A full and thorough investigation is under way and I would appeal to anyone who noticed any recent suspicious activity in the area or who has any information which could assist us with our inquiries to contact detectives at Musgrave on 101 quoting reference number 79 04/12/19.”

“Thankfully no-one has been injured in this reckless attack,” he said.

“The vast majority of people in West Belfast and beyond want these futile attacks to end immediately.

“Those responsible have nothing to offer but hurt and injury.

“People should do all they can to assist the PSNI in their investigation.”

Mark Lindsay, chairman of the Police Federation for Northern Ireland, said the officers inside the vehicle had been lucky to escape without injury in what he described as a “callous attempt to kill them”.

“The officers patrolling in their vehicle in Milltown Row were fortunate to escape unscathed after their vehicle was struck by a suspected grenade,” he said.

“Instead of reporting a failed terrorist attack this morning, we could easily have been commenting on fatalities or serious injuries. I am relieved that our officers weren’t hurt in this cowardly and callous attempt to kill them.

“As a community, we have to rid ourselves of this terrorist menace. It is holding back all of us who want to build a better future for our children.

“These dissident republicans are heartless and ruthless. We have a threat level that is officially rated ‘severe’ and there’s little prospect of that changing in the foreseeable future.

“There is a full investigation under way and I would ask the community for its help to track down the people responsible for this murderous attack.”

“Those responsible clearly have no respect or care for the people who live here,” he said.

“Their intention was to kill or harm and it is totally despicable that anyone would carry out this mindless attack.

“Thankfully nobody was injured but we could be dealing with a different story today.

“Someone knows who has carried this out and I would urge anyone with any information to bring it forward to the police.”

Metropolitan Police Home Office wellbeing ARV WSP Armed Police welfare Firearms Officers Terror attack PFOA West Mids Police Terror Threat illegal firearms PFEW College of Policing Assault on Police Taser PTSD Armed Police Numbers Mental Health Police Scotland AFO NPCC Protect The Protectors Welfare Support Programme
I have recently been medically retired from the police with PTSD following a serious injury on duty a few years ago. I would not be here if it was not for the PFOA - they literally saved my life. In February 2017 I was long-term sick off of work and I was in a very bad place. Whilst I have been unable to continue as a serving officer, I will forever be indebted to the PFOA. I will never be able to repay them for all that they did. All I can say is thank you so much from me and my family.
PFOA assisted by offering counselling/coaching support to officer’s family. A respite break was granted to allow the officer and his family to get away and spend some valuable time together as a family unit.
The PFOA purchased a new cross trainer and have loaned this to the officer to enable him to remain active and hopefully return to Ops.
PFOA arranges support for the officers involved prior to the Inquest and after by way of a respite breaks and NLP Coaching or Counselling.
I would like to personally thank the PFOA for the gifts we received for our daughter. The timing could not have been better. the week the gifts arrived, she had lost her hair and was due to go back to hospital for her next round of chemotherapy treatment which she was not looking forward to. Opening the parcel put a big smile back on her face for two reasons. firstly, because you had chosen as gifts exactly what she would have chosen for herself. But secondly and more importantly, because she realised other people ere also thinking of her and willing her to get better. People she had never met.
Thank you so much for the shopping vouchers, they will come in very handy. Thank you for helping my daddy to be himself again. Keep helping police officers because some people don’t understand how hard it can be and they are doing a great thing.
This act of kindness was greatly appreciated by us both at what is a very difficult time for our family.
© 2017 PFOA - Police Firearms Officers Association
Head Office: Chatteris Police Station, 18 East Park Street, Chatteris,
Cambridgeshire PE16 6LD - Tel: 01354 697 890
Email: info@pfoa.co.uk