Frontline officers want to be armed with Tasers at all times 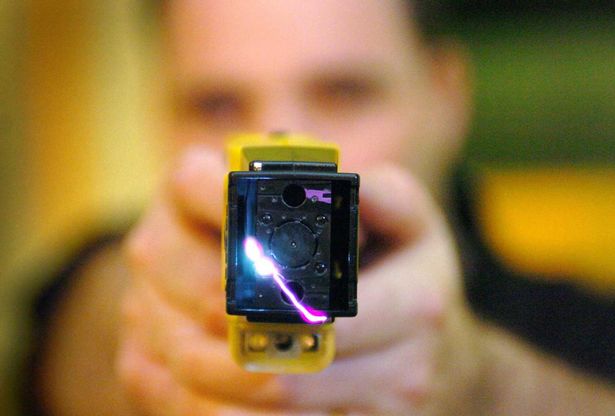 The vast majority of North Wales Police officers want access to Tasers at all times while on duty, according to a survey.

The study by the Police Federation of England and Wales explored officers’ views on firearms, examining the level of satisfaction with their current access to armed support, and their views on routine arming and other protective measures and equipment.

It found that 79 per cent of respondents want access to the weapon at all times on duty.

Rich Eccles, Secretary of North Wales Police Federation, said: “It’s no coincidence that the majority of officers questioned want access to Taser at all times, while a large proportion of those same officers’ lives have been in serious danger in the last two years.

“Taser is an extremely effective means of dealing with the many dangerous situations that officers often face and is a less lethal option than more conventional firearms.

"In 80 per cent of cases where Taser is drawn, it is not fired as the deterrent is enough, which helps protect communities as well as protecting officers from assaults.”

One officer who has personally felt his life has been in serious danger, while in the line of duty, is Sergeant Meurig Jones.

In January 2015, he was assaulted in Menai Bridge, an incident he believes could have been avoided, had he been armed with a Taser.

Sgt Jones said: “I stopped a vehicle and proceeded to search the two people inside. There was nothing untoward in the stop at all, until I discovered a bag in the front passenger foot well.

“Things escalated very quickly and I was subsequently assaulted by the two persons in the car. Had I been armed with a Taser at the time, things could have been quite different.”

The incident left Sgt Jones with a fractured finger and a herniated disc in his neck, which needed spinal surgery. The injuries left him out of action for more than six months.

He firmly believes Tasers should be more readily available, as officers are working alone far more often, leaving them more at risk.

Sgt Jones added: “I think the availability of Tasers for more officers is something which would prevent the risk of assault on officers.

“The problem if you haven’t got a Taser is that you still have to get in the fighting arc of the suspects.

"A spray is very useful but the Taser is another tool in the armoury. Once you’ve warned them you have a Taser, very few people want to come near you because they know the consequences of what happens if you do.

“Don’t get me wrong, Tasers aren’t for everybody, but if you feel that you could use it and you pass the course then it should be something that’s far more readily available.”

A spokesman for North Wales Police Federation added: “This is just one of many incidents where police officers have faced extreme danger and violence.

"Had the officer been in possession of a Taser then the outcome and resolution could well have been very different resulting in far less danger to the officer and the public.”

Armed Police welfare Mental Health Home Office Protect The Protectors Welfare Support Programme WSP IPCC PTSD Terror attack Armed Police Numbers PFEW Terror Threat ARV wellbeing Firearms Officers Metropolitan Police Assault on Police College of Policing Taser illegal firearms West Mids Police PFOA AFO Police Scotland
I have recently been medically retired from the police with PTSD following a serious injury on duty a few years ago. I would not be here if it was not for the PFOA - they literally saved my life. In February 2017 I was long-term sick off of work and I was in a very bad place. Whilst I have been unable to continue as a serving officer, I will forever be indebted to the PFOA. I will never be able to repay them for all that they did. All I can say is thank you so much from me and my family.
PFOA assisted by offering counselling/coaching support to officer’s family. A respite break was granted to allow the officer and his family to get away and spend some valuable time together as a family unit.
The PFOA purchased a new cross trainer and have loaned this to the officer to enable him to remain active and hopefully return to Ops.
PFOA arranges support for the officers involved prior to the Inquest and after by way of a respite breaks and NLP Coaching or Counselling.
I would like to personally thank the PFOA for the gifts we received for our daughter. The timing could not have been better. the week the gifts arrived, she had lost her hair and was due to go back to hospital for her next round of chemotherapy treatment which she was not looking forward to. Opening the parcel put a big smile back on her face for two reasons. firstly, because you had chosen as gifts exactly what she would have chosen for herself. But secondly and more importantly, because she realised other people ere also thinking of her and willing her to get better. People she had never met.
Thank you so much for the shopping vouchers, they will come in very handy. Thank you for helping my daddy to be himself again. Keep helping police officers because some people don’t understand how hard it can be and they are doing a great thing.
This act of kindness was greatly appreciated by us both at what is a very difficult time for our family.
© 2017 PFOA - Police Firearms Officers Association
Head Office: Chatteris Police Station, 18 East Park Street, Chatteris,
Cambridgeshire PE16 6LD - Tel: 01354 697 890
Email: info@pfoa.co.uk